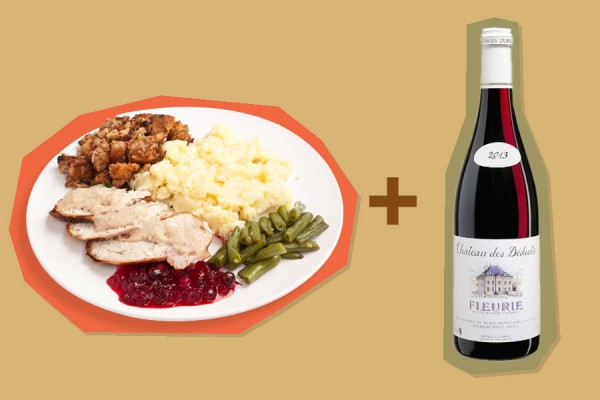 After the once-glorious, now Tupperware’d holiday dinner leftovers are banished to the fridge for the night, it seems only right to give them the attention they deserve when they inevitably re-emerge the next day.

Reheated Thanksgiving dinner plate. You kept declining the offer to “make you a plate,” but they wouldn’t let you leave without it. Now, you’re famished and suddenly that congealed mess of browns, greens and smattering of reds actually look delicious. Pair it with a Beaujolais, because you’ll probably already have some left over anyway, and its supple texture, relatively high acidity and versatile medley of berry flavors go with a little bit of everything. Pair it: 2011 Chateau des Deduits Fleurie, Total Wine & More, $13.50.

Roast turkey (hold the cranberry), provolone and arugula on ciabatta sandwich. We welcome this Italian twist on an American classic and recommend pairing it with an ice-cold beer, because sometimes there’s no need to overthink things. Crisp and refreshing beer is a sandwich’s best friend. Pair it: Saint James Daily Wages, Lee’s Discount Liquors, $11 (6-pack).

Turkey potpie. The meat pie, in actuality an old American standby, goes back to the Roman Empire, when live birds were sometimes cooked under the pie crust. No fear, however. Your bird will be cooked—twice, in fact. Pair with a barrel-fermented chardonnay. Round and mellow with orchard fruit and butter, it complements the turkey, gravy and crust. Pair it: 2010 Verget Meursault Les Clous, Valley Cheese & Wine, 1570 W. Horizon Ridge Pkwy., Henderson, $65.

That last slice of pumpkin pie. The remaining slice is a sweet start to the morning after, which is also why we think a quick Starbucks run for their pumpkin spice latté is in order—but not without transforming it into a pumpkin “spiked” latté.  A shot of rum makes everything better. If you’re going to get the jump on your holiday shopping, you might as well get a head start on eggnog, too. Pair it: Whaler’s Original Dark Rum, Trader Joe’s, $16.

Green bean casserole. We have a hunch why this dish appears only once per year.  What goes best with this soggy, defrosted green bean casserole bathed in mushroom soup concentrate? If you love it, go for Sancerre. It’s green enough to enliven the green beans, yet clean enough to cut through the mushroom soup’s creaminess. Pair it: 2012 Sancerre Géneration Dix-Neuf (XIX), WineX.com, $50.

Cold yams and marshmallows. Last night it was a warm, sweet side dish imbued with butter and maple syrup. In our opinion, adding a spongy sugar confection to an already sweet carbohydrate makes it a dessert, so warm it up like you would apple pie and enjoy it with a dessert wine, weighty and soft, with flavors of dried apricot and quince, having been made from grapes partially dried under the Sicilian sun. Pair it: Donnafugata Passito di Pantelleria Ben Ryé, Marché Bacchus Wine Shop, 2620 Regatta Dr., $33.