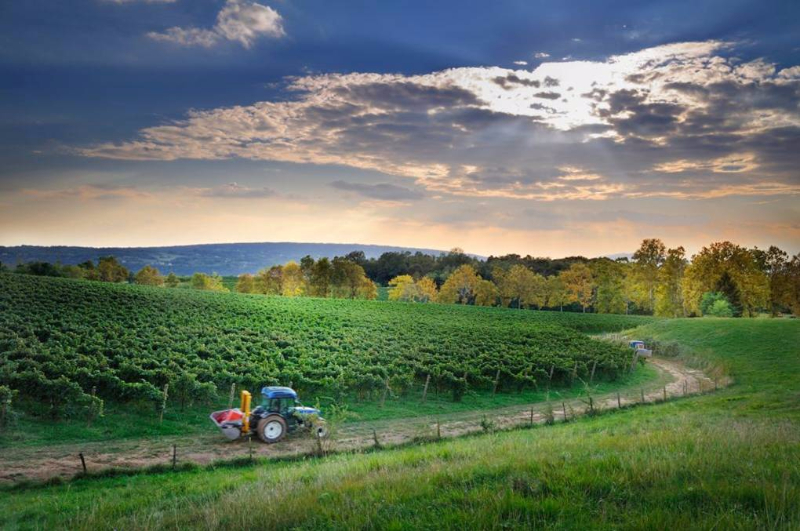 Between Venice and the northern Italian Alps is an agricultural area that has been respectfully tended for centuries. The Conegliano and Valdobbiadenne hillsides, recently recognized as a UNESCO World Heritage Site, is a rural landscape largely devoted to viticulture. Here is where Glera, the celebrated grape of Prosecco, has taken root for hundreds of years. It is also home to Borgoluce, a sprawling wine estate and an agricultural powerhouse that is as much invested in their production of lively bubbles as in turning the land’s resources into food and energy.

Borgoluce is situated in Susegana, a quaint village just 30 minutes north of Treviso. On this cool and partly-cloudy day in May, the drive within Borgoluce’s 1,000-hectare ranch-land is a soul-filling preview to their commitment to environmental equilibrium. Amid a sea of rolling pastures where farm animals roam free, groves of olive trees adorn the land. Around the bend, an apiary along the River Ruio, followed by a verdant patchwork of vineyards. An ancient and magnificent hilltop castle emerges in the distance, and a contemporary winery seemingly blends into the earth. Borgoluce’s paved roads are golden threads that bring together the rich tapestry that blankets the territory, representing a family’s ambitious dedication to a land that gives back.

Environmental responsibility pervades all the company’s activities and the outcome is renewable sources for the production of agro-energy.

“We have always been careful to maintain biodiversity,” says  Borgoluce’s commercial manager Alessandro Samogin. “This is done through multi-functionality.”

Wheat, barley, corn, walnut, pomegranate, grapes, and olives are in harmony with Borgoluce’s cattle, water buffalo, pigs, and sheep. All contribute to the natural habitat of nourishment and energy, and further supported by wild pastures and woodlands. Wheat becomes flour for pasta and bread, an apiary for honey, grapes for wine production, and water buffalo for cheese and dairy and dairy produce. Corn is harvested for energy and food, wood is used to heat the facilities, buffalo waste becomes energy to turn on the lights and for anything that requires power.

Innovation and influence have run through the Collalto family for centuries. Origins were established a thousand years ago, during which time they raised the two castles: Collalto and San Salvatore. From any vantage point on the property, there are reminders of the area’s rich history, colorful eras, and survival of the darkest times. The land is dotted with original farmhouses, two of which have been converted to agriturismos. Atop a small knoll are restored structures that were once farmers’ quarters with attached stables for their field animals.  Up until the last century, the grapes were managed by the estate and contracted farmers.

The Collalto family were innovative pioneers, exhibiting a passionate dedication in the development of the vines and the wines they yield, but never without considering the whole environment.

“We have always been diversified, and animals are important to maintaining the fertilization of the ground; if you don’t have the animals you are using only chemicals,” says Lodovico Giustiniani. He and his wife Caterina Collalto and her sister Ninni together with their mother Trinidad dedicate their efforts to promoting a heritage that is unique in Veneto. “Borgoluce is environment-friendly and one of the things that is most important for us is biodiversity,” he says. Low impact agriculture is practiced throughout the farm without waste or pollution.

Borgoluce is also fully driven by its own power.  A biogas plant produces electricity using dedicated crops, such as estate-grown corn and sorghum. Farm animal manure produces methane gas, which is in turn converted into electricity. And a 60-kilowatt photovoltaic system provides enough electricity for the winery.

“The plant produces more than 1,000 kW of energy per hour and more than 800 kW of calories,” says Alessandro Samogin. “We are self-sufficient from an electrical point of view, and we sell more than 8,000,000 kW per year to other users.”

“We are first agriculturalists, then we are wine producers,” adds proprietor Ninni Collalto.  “This is important. This estate is tended with passion, and a modern biodigester provides eco-friendly, clean energy for sustainable development of the area.”

A sustainable environment also includes animals. A closer look within the territory reveals born-and-bred Limousin and Charolais cattle that graze on grass in the meadows and eat estate-grown cereal. Pigs live in the open air in the Collalto hills. Their meat is packaged, or made into charcuterie and served on the premises. Borgoluce Osteria is one of two dining establishments and a place to taste all the products in the very place they are grown. Each dish respects the raw quality of the material, and the menu offers traditional dishes and new interpretations, which pair well with estate-grown wines.

Approximately 73 hectares of farmland are dedicated to vineyards for the production of Borgoluce’s still and sparkling wines. The Conegliano Valdobbiadene DOCG region is home to Borgoluce’s finest Prosecco vineyards.

Among its broad wine portfolio, Borgoluce produces five distinctive Valdobbiadene Prosecco Superiore DOCG. The extra dry version, with 16 g/L of residual sugar, is their most popular worldwide. The prestigious single vineyard Rive di Collalto, one of the 43 crus (or rive) of the DOCG area, is also produced in an extra dry style.

However, Borgoluce’s total production of 415,000 bottles per year is more focused on producing dry Prosecco. Lampo Prosecco DOC Brut is a vivacious sparkling wine made from grapes from their youngest vines. The Valdobiaddene Prosecco Superiore DOCG Brut’s delicate effervescence and freshness are ideal as an aperitif. From the slopes of Collalto is the Rive de Collalto Brut, which harnesses a full expression from the respected cru. The Gaiante (which means party) is bottle-fermented, as in the traditional Méthode Champenoise. Its cloudy appearance and sediment are a natural sign of no filtration or disgorgement. What results is a completely dry – zero dosage – sparkler and a visual reminder of the wine’s distinct bread crust flavors and aromas.

“How nice it is to drink such a dry wine with slice of salami,” says proprietor Ninni Collalto. “Something typical is charcuterie – products from pigs – salami, sopressa, ossocollo…”

“There is always a good moment for Prosecco. Late morning or early afternoon, have it extra dry, which means more sweeter! But, Brut during all the day pairs with pasta, rice, seafood, meat, it’s a wine that is really versatile,” she says.

At Borgoluce, agriculture is used fully, providing both source and product. The living cycle harmoniously blends together resources of energy, environment, and nourishment. It is an estate where genuineness for the land is traceable. And together with its people, Borgoluce embodies the circle of life.