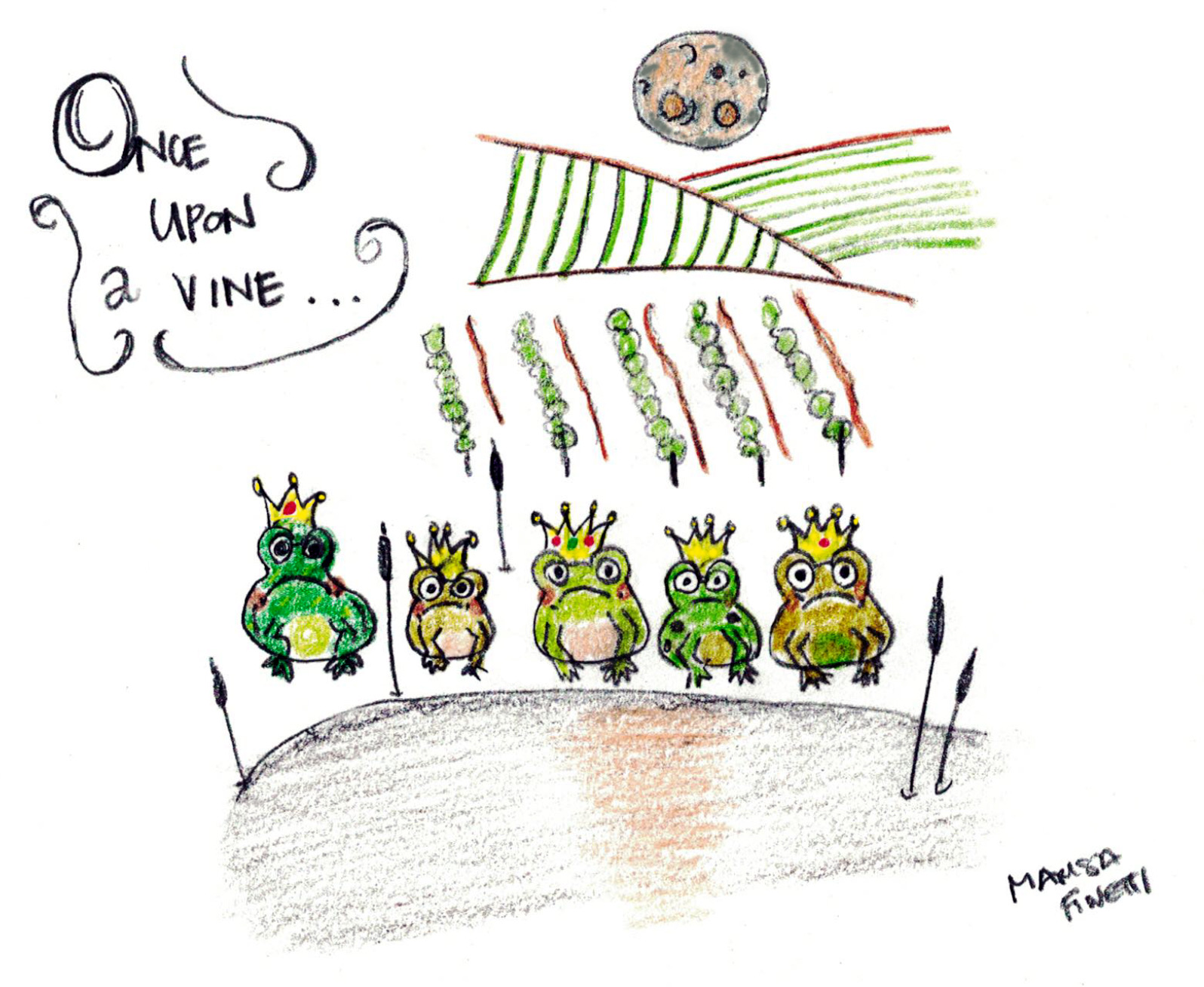 Standing calf-deep, my rubber boots are suctioned into the slick, clay-rich banks. Twilight robs the colors of the day. The sky’s mercurial reflection shimmers on the vineyard pond and across the shoreline, a lone bullfrog tunes the others. Had I known these frogs were remotely symbolic to my wine discovery, I’d kissed each one until I found the prince.

But, they say to sustain an emotional connection to wine, one must kiss a lot of frogs – in other words, be unusually curious and eager to taste plenty. It only took me 15 years.

Earlier on that foggy morning in the benchlands of Dry Creek Valley, California, my heart trembled with joy while watching grape pickers emerge over the hill.  With speed and efficiency they combed their way through our vineyard to deliver the fruit that would become the single vineyard Finetti Ranch Zinfandel.

At the end of the day, we sat before cheese and salumi, Mrs. Ramazzotti’s pasta with meat sauce and bottles of Raffanelli, Frick, and Pedroncelli. While gazing at the tired rows of vines, I gave thanks and sank into this peaceful place with the setting sun.

I would have been content with this life, had I developed a relationship with wine. Even Hemingway’s sensual words attempted to depict wine’s cool and seductive character. Though surrounded by clues, I was still clueless.

But, thinking back to my childhood, wine had absolutely no place in my parent’s high- rise Tokyo apartment. This was the sixties and they and their social circles preferred cocktails, specifically Japanese highballs with fists full of spicy moon-shaped rice crackers.

So while in Dry Creek, I relished what was before me in this pocket of paradise, as did our beloved Chocolate Labrador, Kona. He, too, enjoyed his very own harvest of resplendently plush-ious berries  – when he thought no one was looking.

While drinking wines grown from this land, namely Zinfandel, Cabernet Sauvignon, and Sauvignon Blanc, in retrospect our world was small, young, and very local. There was an ignorant arrogance to our palates much to our own detriment. Whites, reds, pinks, and bubbles… why taste anything outside of our own valley?

Eventually opportunities moved my husband, Craig, and I to Las Vegas. Left behind were the sounds of snapping grapevine canes beneath our feet and the progressive revving of the frogs that persisted into the dank and rainy nights. Yet despite those memories – ten years’ worth – moving out of Dry Creek Valley was the first kiss in a courtship that led to my love for wine.

A magical confluence of engagements with all the right people opened my eyes and my heart in a way I never thought existed. Finally, after writing about fashion and lifestyle for 10 years, here was a subject I could really savor.  But, what was this endless and amorous attachment to wine?

It had much to do with the people – the badass wine professionals, educators, writers, and wine producers. They opened chapters in history and culture, offered tastes and aromas of far-away places. They also came with pronunciation lessons …

Rock stars like Kirk Peterson, Henry Davar, Mike Tadich, Ira Harmon MS and Ian D’Agata to name a few, sparked my love for wine, inspiring me to discover why this stuff even matters in the first place. Was I a fool to realize wine’s greatness so long after I’d left the wine country?

Like any courtship it took some time … and a lot of wine. One of which was Louis Latour Bienvenues-Batard-Montrachet Grand Cru 2004. Kirk Peterson, who was a fairly new friend at the time, but a highly influential wine expert, was generous, sincere, and entertainingly witty in his approach to introducing me to new wines.

“I welcome the bastard son of Montrachet!’” he said in his elevated voice. Oh, my anticipation of a Grand Cru. But after giving it a try, he said, “Nope, it’s corked.” He turned to the sink, dumped his glass with emotionless effort and reached for a completely different bottle. I mean, really? For the rest of the night, my eyes remained fixated on that white Burgundy with plans to give it another try, but only after he left, of course – and for no other reason than to taste that corked bastard.

And then there was the Etna Rosso from the slopes of Sicily’s Mount Etna. He said, “Let’s (meaning, how about you) try this. It’s from a volcano.”  She (the wine) was alluring and steadfast in transporting me six thousand miles away, high above the villages that lie in her shadow where gnarly vines grip her volcanic soil. I was charged with emotion. With his guidance I could taste the savory and mineral qualities and even the attitude one would expect from a wine made from her smoke-pluming cone.

Those were some of the many enlightening moments along my journey to wine. It seems everyday there’s a connection. From wines that remind me of that tumbling quarter in the machine at the laundromat I used to frequent as a child, to wines that take on a personality of someone I’ve never met, such as the Eastern European pianist that shows up in my glass of Ruchè. And still, the wines that quite literally offer me bear hugs when I least expect it. Strangely enough, I was developing a crush.

Given wine’s importance in the world, it’s astonishing to examine the anthropology of wine. It’s the juice that drives life, while at the same time it has sustained us through some of the darker days of our own evolution. It made so much sense when winemaker and friend Valter Scarbolo said, “Wine is the vessel that carries the spirit of the land, its culture and traditions.”

Drinking wine eventually developed into something much larger than the simple act of drinking fermented grape juice at a party. It represented things that mattered most to me: love, friendship and social conviviality. But that’s nothing new, really. Wine has been intimately woven and infused with people, history, culture, tradition, and places for thousands of years. Undoubtedly, wine cradles us with its mysterious and beguiling qualities. It’s the perfect partner to gastronomy. It conjures conversation and contemplation. So, isn’t it quite possible that wine could be the essence of some of the most memorable moments of our lives?

Its sensual abundance brings me such pleasure and inspires my endless curiosity, taking me to places, from the great vineyards of Barolo, to Santorini’s volcanic ridge and the limestone outcroppings on the Dalmatian Coast. My boots have punched through ice puddles in the Niagara, only to be bitch-slapped in the face in return by Jack Frost with a negative 20 degree wind. Indeed, wine builds character! 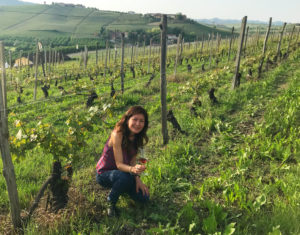 Admittedly, my passion for wine wasn’t inspired by a singular “aha” moment. Rather, my heart was unlocked by many keys –  too many to mention – but all hauntingly illuminating. Aside from its fundamental pleasures, examining it deeply yields a more meaningful, personal and emotional experience. It’s realizing that the discovery of a new favorite wine (and there are many) was actually a gift. It’s shaking the calloused hands of a winemaker and feeling his passion and heritage. It’s this magical conjuring of memories that were long forgotten. Except for one.

I’ll always remember the beginnings of this journey when I started as a grape grower in Geyserville.  Moving away sparked a crush, which led to my thirsty obsession. At the heart of it all, I’ve kissed an army of frogs. Each one turned out to be a prince. I’m blushing again.

Quick! Get me my pen!