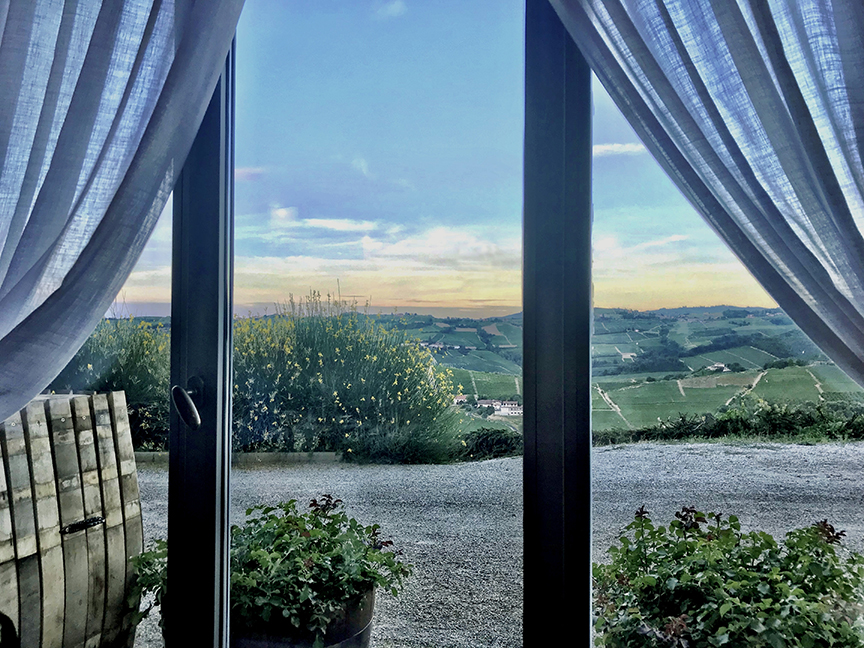 Arrived in Milan. My flight was delayed, and while waiting for my bags, my phone chimed. It was Andrea, the driver, already waiting for me. The hour and a half road trip was slightly harrowing, but this was Italy, and Andrea worked that six-speed manual in and out of traffic like a Daytona 500 race car driver. I wasn’t too worried, really. I think I only slammed my foot on the imaginary brake six times.

Before long, verdant rolling hills appeared, followed by groves of hazelnut trees, picturesque hilltop castles, and more hills. Tension started to melt. After whipping through roundabouts and curvy roads, we arrived at my destination. As idyllic and sleepy as the commune of Barolo appears to be, there exists indescribable energy here and throughout the region – the people, the wine, the food, the land. It’s beautiful and magical, with an absolute potential to make a life-changing impression on anyone who makes the trip.

Upon arrival, I joined a friend and colleague from my hometown who was also attending Collisioni, the week-long wine event and festival. And by the end of that first day, I met a dozen more friends from all over the world – wine writers, sommeliers, beverage directors, educators, importers, wine producers. These were people who loved and appreciated wine as much as I did, and I felt that we all found our very own “sense of place.”

Later, after leaving an incredibly memorable dinner at Locanda Del Pilone in Alba, several of us walked down a driveway to meet our shuttle. Then suddenly, a single firefly appeared dancing amidst the nearby Nebbiolo vines. It was the first firefly I ever saw in my life. I was captivated. Noticing my excitement, my friend cupped his hands around the little glow-bug ever so gingerly. Good catch! When he opened his hands, the flashing had stopped—time to release it.

The days that followed were long and filled with back-to-back seminars, tastings, and dinners with producers. Occasionally, a light snack and Champagne in a hip tasting room and wine shop called La Vite Turchese, a 4 € tour through a quaint little corkscrew museum, Museo Dei Cavatappi. An immersive soil seminar with G.D. Vajra, late nights in Alba with the penetrating aroma of Nutella in the air, echos of cobblestone beneath my stride. Every moment mattered. Every moment remembered.

The culmination of events made me realize just how profoundly engaged I was with wine. And the feeling of being around like-minded souls was illuminating and invigorating comforting, emotional, and persistent like well-aged Champagne.

But, that first night with the single firefly’s light – so dainty, quiet, and luminescent as it pranced in the vineyards under a full moon in Barolo, of all places…

Surely, it was a sign that even something so small and random is capable of illuminating a vision.

I have been fortunate to meet the most incredible individuals, whether they are people in my own city or afar. Thank you to those who have taken this wine journey with me.