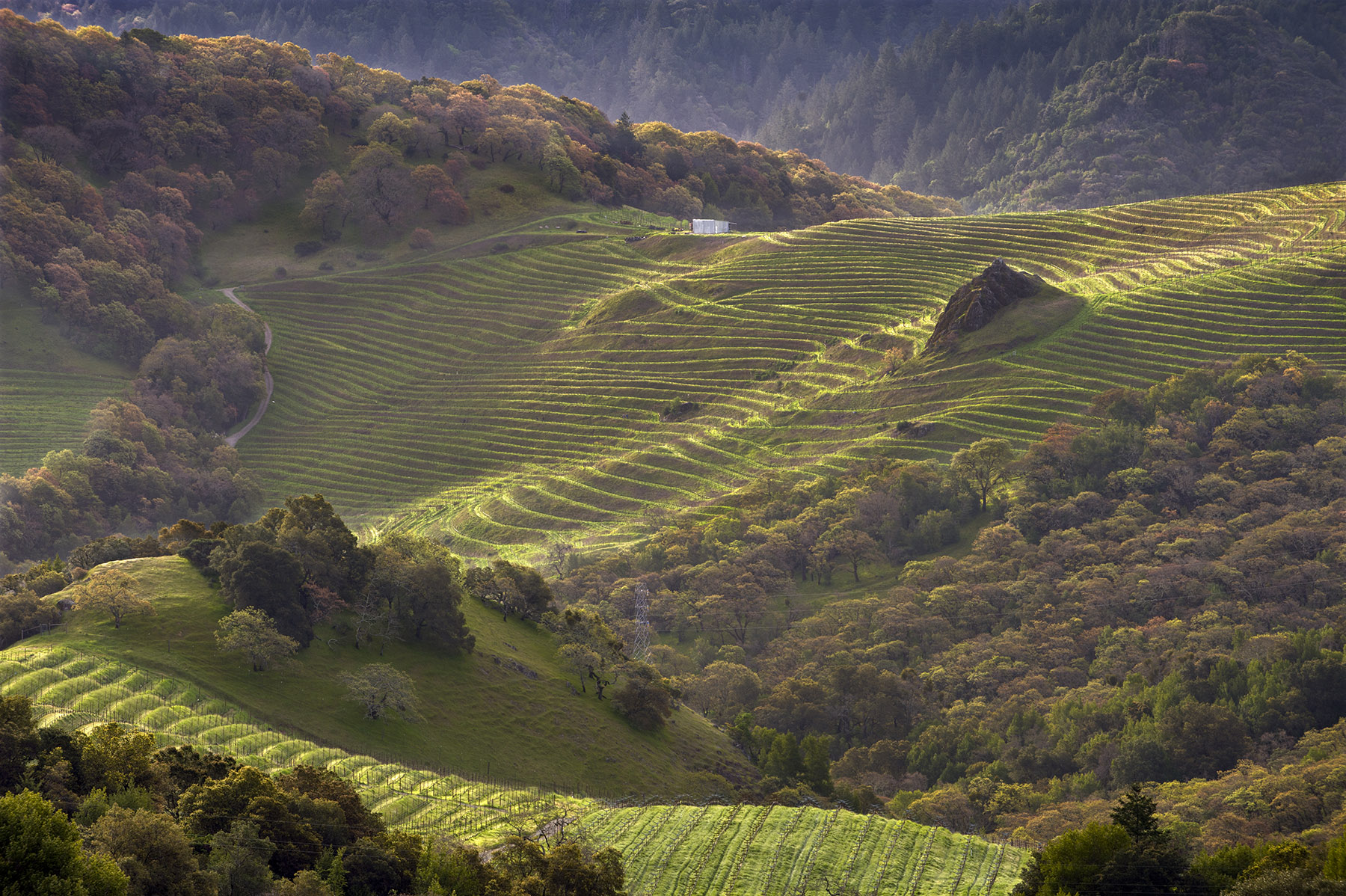 The drive was slow, steep, and bumpy. But, the rugged surroundings from the windows of the vintage four-wheel-drive vehicle eventually led to a clearing at the top. We emerged high above the fog line that morning. And, while carefully treading the peak which straddled both Sonoma and Napa valleys, Cain Vineyard winemaker Christopher Howell reached down to pull a weed firmly from the ground.

Tarweed, a sticky, hairy plant with little drab beige flowers, has an aroma of asphalt and citrus, with a penetrating, lingering resinous perfume. While rolling the fingers across the spindly, somewhat unattractive plant, one would tend to take the weed whacker to this specimen, but not at Cain.

“There are more than a dozen species of plant, not all related, growing in California and commonly identified as tarweed,” said Howell. “We’ve not seen our tarweed, with the delicate white and purple flowers and distinctive scent, growing in any other vineyard.”

We walked deeper into the property, and he plucked a leaf from a large tree on the path overlooking the vineyard.

A waxy green leaf with the ever so familiar aromas of menthol and eucalyptus; it was unmistakably bay laurel. After than, not much more was said by Howell on that field trip. On purpose.

Vines basked in the early morning warmth as we continued on our vineyard walk. Drenched in sunshine along the terraces of east-facing slopes, later the fruit would greet the cool afternoon breezes from the Pacific Ocean. Towering above St. Helena in Napa Valley in the Mayacamas Mountains, this brisk, wooded appellation reaches 2,100 feet at its highest point. It was breathtaking and cleansing.

Throughout the rugged hillside AVA (American Viticultural Area) of Spring Mountain District are natural wonders. It is named for the many springs that surface throughout the region.

This hillside beauty – lush with scrubland, forests and meadows – was one of the first vineyard areas to be planted by the early settlers in the 1800s. Today, a piece of history remains as a quiet, rural respite from the bustling tourism, and it is one of the few spots in the Valley that is home to family-owned wineries that produce memorable wines of outstanding power, quality, and elegance.

Spring Mountain District’s vineyard parcels are small, widespread and far from the conveniences of the Napa valley floor. Influenced by the Pacific Ocean to the west and San Francisco Bay to the south, the microclimate tends to intensify the harshness of winter storms and moderate intense summer heat. These grapevines, which struggle at the edge of their habitable range for sunlight, water, and nutrients, develop fruit of more intense, expressive character and, hence, more memorable and long-lived wines.

An array of varieties thrive here besides Cabernet Sauvignon, including Merlot, Zinfandel, and Chardonnay. And, before the variety fell from favor in the 1980s, Riesling was an early pacesetter and among the more commonly seen white grape varieties here, but now just a few rows of the vines remain.

On the way back to the vehicle, we walked down into a vineyard amphitheater which cradled a rather prominent rock.

“The dramatic rock outcropping seems to be a powerful place,” said Howell. “It could be a vortex of energy, and we can imagine that through the ages, this rock has attracted the attention of all humans who have come nearby.  We simply call it, ‘La Piedra’ – the rock.”

According to Howell, contemporary geologists and soil scientists have visited and found the granular, non-crystalline structure to conform to that of greywacke, a type of sedimentary rock in the category of sandstone, which forms part of the Franciscan Mélange, that underlies San Francisco, the Golden Gate, Mount Tamalpais, much of the Mayacamas, and further south in Big Sur. This underlies much of Cain Vineyard and gives birth to its distinctive clay-shale soils. Soils like this cause the grapes to ripen more slowly, producing fruit that is naturally high in acidity and wines that are generous and bold with nervy tension.

The Spring Mountain District wine producers, like Howell, are an unusual and tenacious group of individuals who are dedicated to their unique terroir, and always welcoming challenges with their strong ideals of integrity.

Howell has grown distinctively earthy estate wines since 1991. All are Cabernet Sauvignon blends drawn from unique vineyard sources. The sensual and silky Cain Concept that is at once drinkable and also worthy of aging, also represents a “benchland” wine that defines the greatness of Napa Valley. The Cain Cuvee, smooth, approachable, and versatile, expresses the wine’s tendency to dance around on the tongue. Lastly, the Cain Five is a wine that Howell says isn’t so much about the grape variety (ies), but more about the idea of “half mountain/half valley.”

“What we have learned through our work at Cain is that certain places taste more of themselves and less of the specific grape variety,” said Howell. “The wine from the valley displays the warmth and the generosity of the soil, making it altogether more friendly, while the mountain wine is more structured, less fruity. It’s a little more herbal and austere with aromas of tarweed.”

There, he said it. Tarweed. The peculiar aromas and feeling of annoying sap between the fingers of the unlovely weed during that early morning walk came through in the glass, like a field trip, followed by a thirty minute lab. But instead of seeing the unsightly, the experience was a profound and beautiful connection to the land.