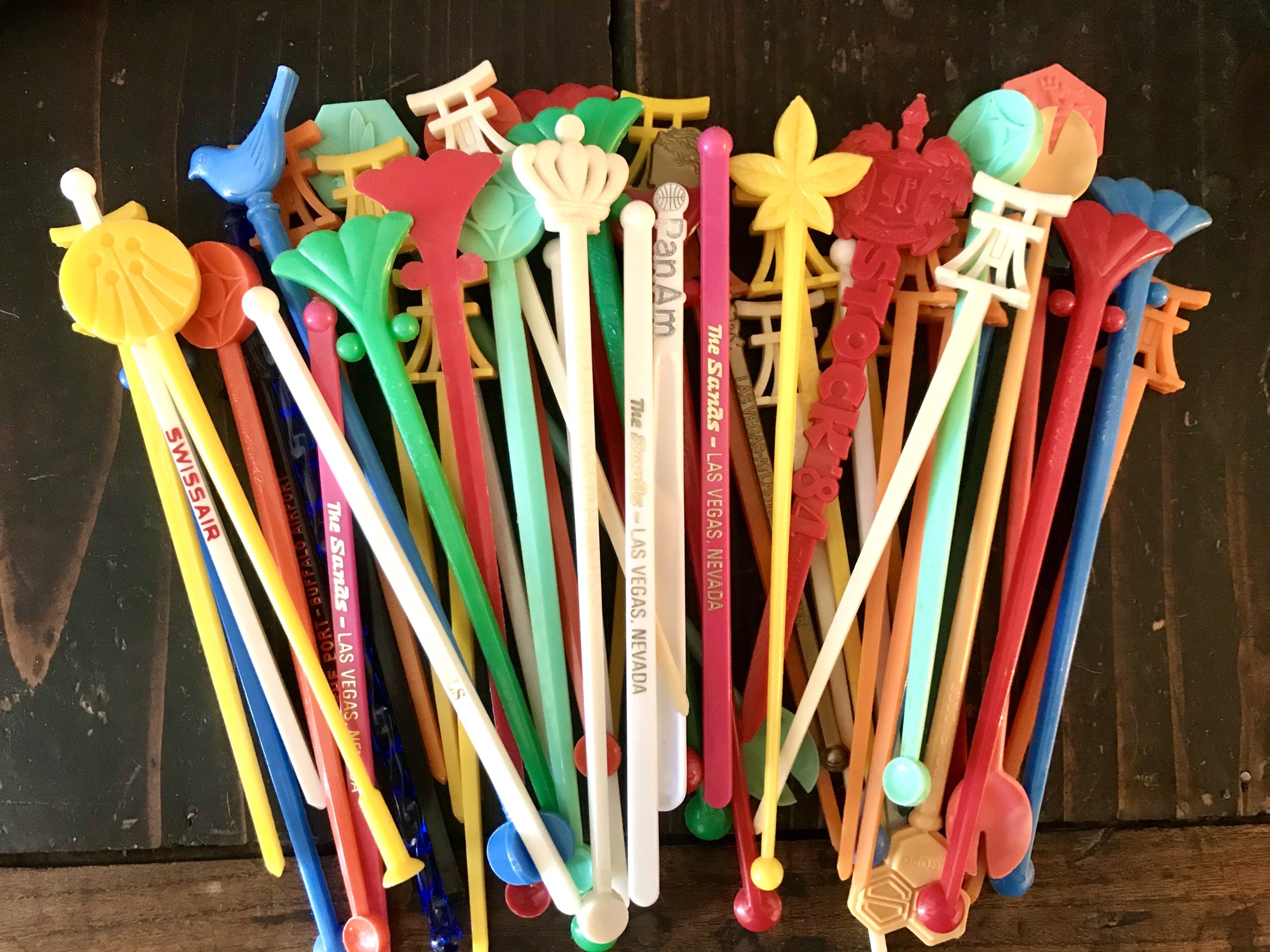 In the world of vintage bar accessories, amid colorful glassware and shakers in sparkling chrome, swizzle sticks were an important part of the lounge’s decor. In fact, a drink of any kind would have simply been considered uncivilized without one.

I recently came upon a collection of vintage stir sticks from the 1960s and 1970s. This was indeed the Golden Age of the swizzle stick. Many were collected by my mom in Tokyo, most of them from the swanky Hotel New Otani. It was a place where she and my dad entertained clients. Incidentally, in 1966 the New Otani’s modern shape (three wings with a round, revolving restaurant on top) made it an excellent choice for the James Bond film “You Only Live Twice.” My parents were so chic to frequent this place! And being that it was the “Mad Men” era in a true sense (my dad was advertising executive for J. Walter Thompson), slim suits, cigarettes, and cocktails with these quirky artifacts were definitely part of the culture.

So now, a brief history.  The original swizzle stick was actually an 18th century West Indian invention. A skinny little branch, frayed on one end, was rotated in a glass to mix a drink. But it wasn’t until 1935 when Jay Swindler, a chemical engineer, patented a version of it just after Prohibition ended. He designed the stick with a point on one end for retrieving sunken olives and cherries, and a flat, paddle-like top to display advertising.

From the 1930s through the 1950s, swizzle sticks came in a variety of styles-from simple and unadorned, to glittery and playful. Most sticks during this era were made of glass. Manufacturers customized the swizzles by imprinting hotel and bar names on the glass. In some cases the logo was screened on a piece of paper, which was then inserted into a tube before the end was sealed – kind of like a message in a bottle!

Then during the 1940s and 1950s, plastic production increased, and many businesses, such as nightclubs, airlines, and liquor companies had a custom signature swizzle. These were considered souvenirs and taking them home was encouraged.  Essentially, they could be used again, serving as reminders of a great trip or night out.

In this case, collected and stored ever so carefully, to receive the spotlight and resurgence 50 years later.