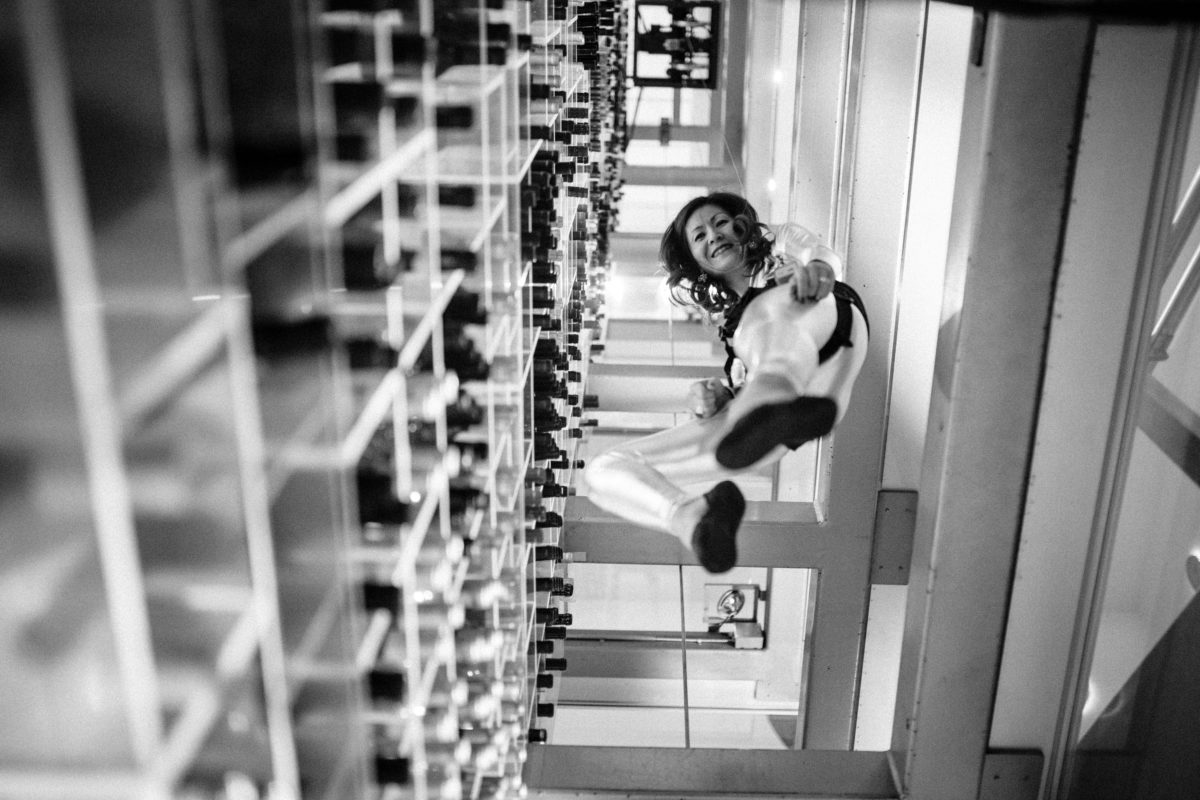 If you ask me to ascend four stories while dangling from discernibly thin cables, I’d more than likely pass on the opportunity. Not just because I’m fearful of heights, but really, why would I want to do that in the first place? Unless of course, some form of fermented grape juice was involved.

In all honesty, nobody had to twist my arm to be a Wine Angel for an afternoon at Aureole in Mandalay Bay. It had always been a brewing, or shall I say, a “fermenting” desire, sort of personal bucket list item, and the thought of being able to say, “Yup, I was a Wine Angel” if but for 15 minutes, was very appealing to me. The height was obviously an issue, but I clearly survived.

The job title of “Wine Angel” dates back to when Aureole opened in 1999. Dressed in cat suits and harnessed to wire cables strung from the ceiling of Charlie Palmer’s restaurant, they glide up and down, fetching bottles of wine for guests from an impressive stainless steel and glass tower. The original restaurant designer Adam D. Tihany masterfully created the tower in part to fill the restaurant’s 50-foot ceilings and store up to 10,000 bottles, over which wine director Harley Carbery presides.

The tower, I hear, was inspired by Tom Cruise’s famous cable drop scene in Mission: Impossible (1996). I imagined myself suspended in a chilly, 55-degree glass box having to bypass laser grids and ventilation ducts to access vintages of Domaine de la Romanée-Conti, although I would have been equally thrilled with a bottle of pigato from Liguria. Seriously.

So there I was alongside Eboni Lomax, a veteran Wine Angel since 2002.  She brought me out a skin-tight, one-piece jumpsuit to squeeze into. Shiny as polished silver, this was the newest uniform that was unveiled along with the restaurant’s redesign, the silver apparently meant to make the Angels’ appearances more visible.

I stepped into the harness and heard two very assuring clicks as Lomax secured me to the cables. She went up first to demonstrate. She was so graceful, even in a tight space of about 5 feet between where the bottles are stored in the central column and the glass wall of the tower.

Slowly I ascended and, before too long, I heard her yell, “Cross your feet!” from below. “So you don’t kick the bottles!”

“And watch your head.”

Oh, that, too?  That’s because every 10 feet I would approach the structural metal beams of this massive wine box. A Wine Angel with a cranial damage would be traumatic flight, indeed.

Photographer Krystal Ramirez, who was capturing my moments, has had far better subjects. There I was, swinging from side to side, twisting and turning to obtain any shred of balance and grace. Surely, Charlie would never consider me to be an Angel now.

Krystal then motioned me to pull out a bottle. Oh, you mean let go of the cables and control buttons all together?! But I had to do it. If I couldn’t retrieve a bottle, how could I call myself a Wine Angel? So, while taking it out of the bin was relatively easy, returning it wasn’t, as I had to put the wine back exactly where I found it. The restaurant has a master chart that tells the Angels where everything is located. It was challenging to find that one spot amid thousands of bottles before me, so there it went: back into the wrong bin. (Sorry, Eboni! You told me you were doing inventory that week, right?)

While hovering aloft, I took the time to take it all in. Aureole “reimagined” has a new look and design, which was just unveiled late last year. From my vantage point, I could see the featured art pieces on the high walls, resembling bubbles of silver mirrors that matched my outfit. I could also see that this journey was nearing its end.

Slowly, I descended, planted both feet on the ground, and thought: That was magical! Now it’s over. And I am thirsty. Oh, Harley!