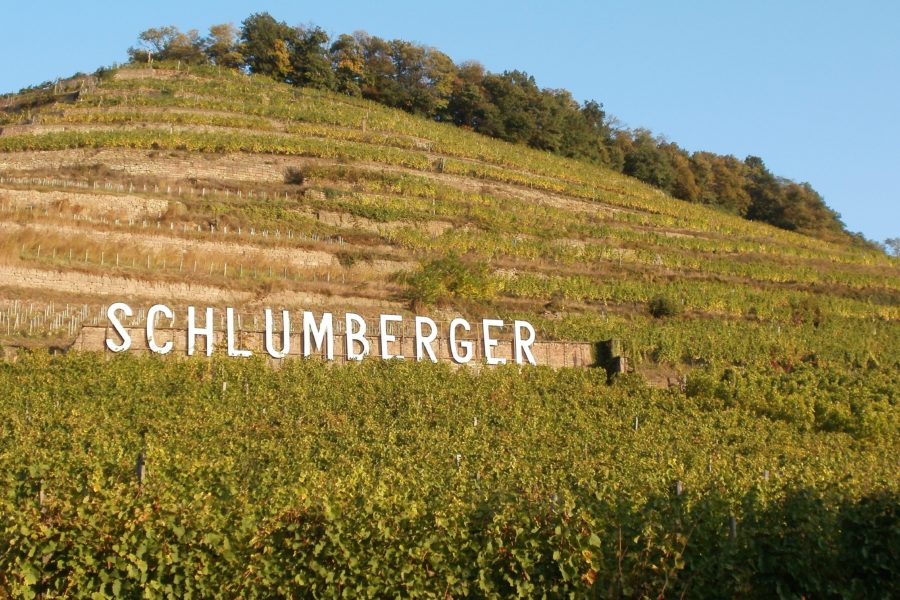 The Alsace region of France is so charming, it might as well be in a fairy tale. Set against the backdrop of the forested Vosges Mountains, quaint villages and storybook hamlets with little clusters of pastel-painted, half-timbered houses adorned with colorful flower boxes bring cheer to the picturesque landscape.

Nearby vineyards display gorgeous scenery where exquisite wines are produced from a rolling landscape of green ribbon that enjoys precise alignment of the vines, which catch every minute of life-giving sunlight. These sun-dappled vines are the source of wines that are truly Alsacian — juices that are pristine expressions of the their fruit and the land.

Along the rocky outcrop of the Kitterle Vineyard — famous for its luscious rieslings, pinot gris and gewürztraminers — are large, bold letters that read “SCHLUMBERGER.” The vineyard is nicknamed “the calf breaker” because of its steep 50-degree inclines.

Domaines Schlumberger’s mountainside vineyards in Guebwiller in northeastern France are surely one of the most breathtaking in Alsace and is its only spot that produces four grand crus (superior grades).

During a trip to the U.S., Thomas Schlumberger, a seventh-generation producer, showcased his wines and shared his family’s story about the land it has called its own since 1810.

Dressed in a slate-blue suit and bearing a case of his family’s wine, Schlumberger makes himself comfortable in the private dining room at Morels French Steakhouse & Bistro inside The Palazzo. He is soft-spoken with a quiet smile, yet his crystal blue eyes are full of expression and passion when he talks about wine.

“I quote my sister, ‘Having four grand crus is like having four kids. They are born and raised in the same family, but they all have a different character,” he said.

Domaines Schlumberger is the largest grand cru producer in Alsace, representing approximately 10 percent of the grand cru in the region. The four “noble” grapes of Alsace — riesling, pinot gris, muscat and gewürztraminer — occupy the premier sites and are, with minor exceptions, the only grapes planted in the region’s grand cru vineyards.

“The magic of it is that those four (grand cru sites) are not far away from each other,” he said about the 130 hectares of continuous land, of which 70 hectares are listed as grand cru.

“You don’t need to travel miles away to have different type of soil and exposure to get a different expression of the wine in the glass.”

The checkerboard of soil types in Alsace is a geologist’s dream, and includes chalk, clay, limestone, granite, schist, volcanic rock and sandstone.

Schlumberger was born and raised in Alsace. He recalls one of his fondest memories with wine is when his parents gathered him and his siblings to enjoy a 1983 Petrus, a bottle that they had been saving for some time. He was 18 years old.

“They made us feel that it was a special moment, and that’s when I opened my mind about wine. It’s not just a product or something you drink to be filled. It’s more special; there is always a story and memories to keep from that moment.”