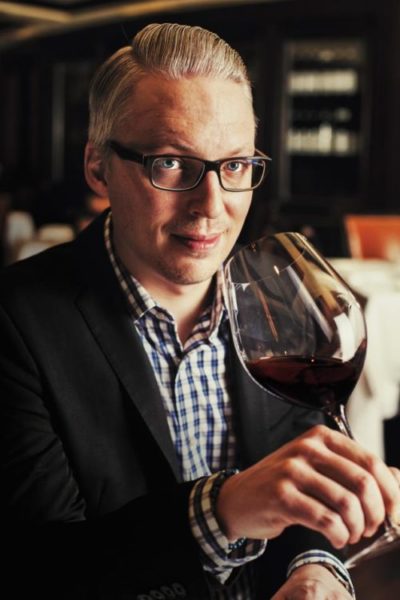 If there’s one advantage to growing up in Yerington, Kirk Peterson will tell you. He’ll even describe what Yerington tastes like: bright and fresh and mineral, evoking the rock outcroppings after a rain on his family’s ranch. Today, Peterson is beverage director and certified sommelier at Batali & Bastianich Hospitality Group Las Vegas, and one of the most respected Italian wine specialists in town. But his rural roots are never far from his mind — or his palate.

Sitting at a linen-covered table inside Carnevino Italian Steakhouse, the slim Peterson, dressed in his Italian-style, slate-blue suit, sips black coffee and pokes gentle fun at his rural Nevada hometown as the “jewel of Lyon County.” But it is indeed in Yerington where he developed a passion for food and wine — and the fine-tuned senses of smell and taste that go along with it. It certainly helps, too, that he grew up in what he calls a “food-obsessed” family.

As a little kid, it was a splash of wine and water, and then as I got older, the amount of water decreased.

“I didn’t realize this until I was in the second grade, when I’d have friends over and my dad would offer a snack,” says Peterson, 39. “Out would come pickled herring, hard, aged cheeses, Swedish crackers, smoked oysters. … I’d see the look on the other kids’ faces and they’d say, ‘What the heck is that?’”

Foods that seemed exotic to them were the beginnings of Peterson’s culinary education. His parents, exceptional cooks, exposed him to a wide assortment of food. And, of course, choice of beverage was always an important consideration as well.

“When you have a cheeseburger, you have Coke because they go together, so when we’d have pasta, we would have wine,” he says. “As a little kid, it was a splash of wine and water, and then as I got older, the amount of water decreased.”

Yerington, a small ranching and farming town in the western elbow of Nevada, doesn’t seem like a place of culinary discovery. But it was to Peterson, who lived what he calls a “Norman Rockwell-like experience” there from 4 to 18. The rural life’s emphasis on simple pastimes and pleasures enlivened his senses, groomed an appreciation for subtlety, and eventually helped him master the complex flavors of Italian wines. “I think I was very lucky in my upbringing in the way that I was exposed to flavors,” he says. “Sensory training is something as simple as smelling your food and noticing flavor.”

A taste of the big city
But as Peterson grew up, Vegas beckoned, and he heeded the city’s call — not to party hard, but to mature.

“When I first came down to Las Vegas to attend (UNLV), the first thing I did was get a fake ID, because I realized pretty quickly that I was going to be forced to drink only water or soda anytime I would go out to get good food.” Peterson split time between film school and working on Hollywood projects. All the while, he was broadening his palate and exploring food and wine. “The entertainment industry pays you a drastic amount for a young person,” he says. “Some people bought race cars, others stuffed it up their nose. I ran to restaurants because I wanted to know what a bottle of white Burgundy tasted like.”

He tells a story about sitting in a Los Angeles restaurant with his “bad fake ID” and Discover card, and realizing, after randomly ordering a bottle of wine, he had made a pricey mistake.

“I wanted Montrachet because I knew I wanted it to smell and taste like the wet rocks out by my uncle’s ranch. That real mineral element doesn’t exist except in wines of a certain caliber,” he recalls. “But, instead of getting wet rocks, I got like this buttery-mold thing. It was a Meursault, which now I actually enjoy.” The experience set him back a thousand dollars, but fueled his fascination with wines.

After completing his degree, he taught and directed theater in Australia. Upon his return to the U.S., he had a short stint in music production while supplementing his income with waiter jobs. Finally, he was offered a promotion at Mon Ami Gabi to help manage their wine program.

“When I was offered that, I said, ‘I quit,’ because if I was truly going to work in wine, I wanted to work at a place that had a larger, more serious wine program.”

Confessions of a cork dork
By that time, he had already taken courses through the International Sommelier Guild, and upon opening of Carnevino, he was a waiter briefly, then was promoted to sommelier, head sommelier, wine director, and now beverage director for all four Las Vegas B&B Hospitality Group properties: Otto, B&B Ristorante, Carnevino, and B&B Burger and Beer.

“I’ve watched Kirk grow over the years — actually very quickly,” says Harmon. Typically, wine lists are developed to offer a mix of highly regarded wines and recognizable brands for diners, but Harmon admires Peterson’s intrepid spirit in including rare treasures on B&B’s lists as well. For instance, Harmon recalls how Peterson picked up on an uncommon Sagrantino di Montefalco called “Sacrantino” carried by J&P as a beautiful steak wine. “The producer only makes about 90 cases, and Kirk has bought half their production for the last three years.”

Peterson’s lucky customers get more than a novel, memorable bottle. Peterson goes a step further. A self-confessed “cork dork,” he’ll even taste their wine with them and drop a few descriptors, if they request. He does tend to save his most colorful descriptors for his closest circle, however.

He delivers some of the most entertaining wine descriptors I have ever heard, such as ‘koala bear’s asshole’ — I assume reflecting a eucalyptus component…

Devin Zendel, head sommelier at db Brasserie, who previously worked for Peterson at Carnevino, admires his way with words….