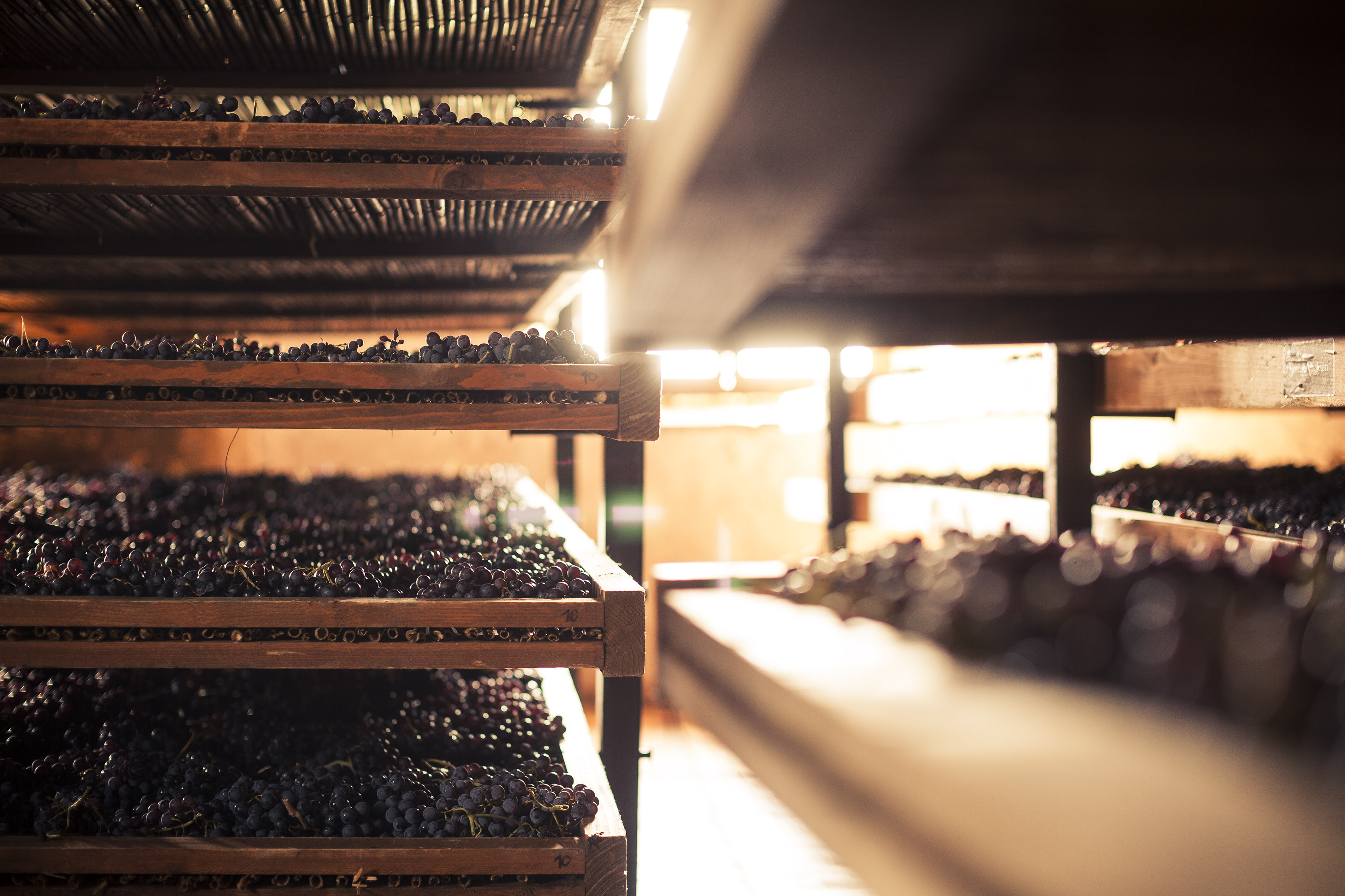 Wines made from dried grapes are a centuries old tradition dating back to the Roman times.  Called passum, “raisin wine” was made from half-dried grapes which were often left on the vine.  In many ways this practice remains today.  The style of wine is produced in both in sweet and dry versions and central to this unique style is appassimento, the process which involves drying grapes in ventilated drying rooms through the cooler months. Intoxicatingly delicious, these wines are charming the world over with its exuberance and complexity. Amarone della Valpolicella is the flag bearer of this special class of wines. The seductive and opulent wine hails from Italy’s Veneto region, which is famously known backdrop of Shakespeare’s Romeo & Juliet. To describe the wine as a romantic as the play is accurate, serendipitous, most certainly, a tragedy however, it is not – unless if finding a bottle proves to become difficult.

Meaning “the great bitter,” Amarone’s absence of sweetness is where its name comes from. To appreciate Amarone fully is to visit its home.  Situated north of the picturesque city of Verona, the Valpolicella wine region enjoys gentle breezes which skim off Lake Garda and the Adige Valley and facilitate the “raisinating” of grapes in attics, barns and lofts. The corvina grape is the region’s dominant native varietal. It is blended with additional autochthonous varieties, primarily corvinone and rondinella to create each blend. 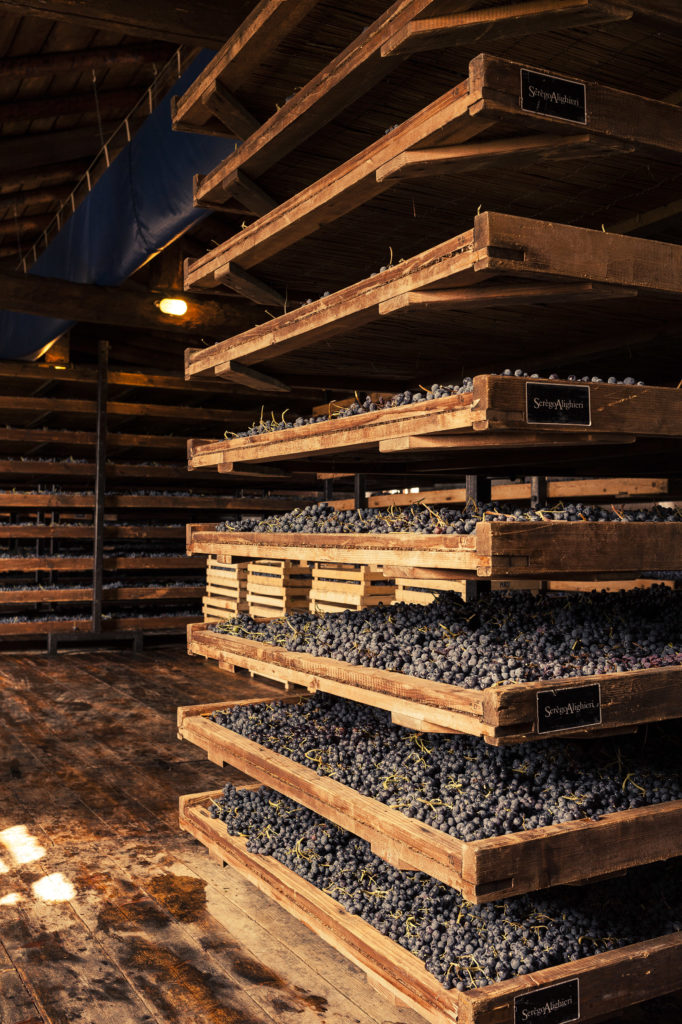 “Amarone della Valpolicella in general tends to have this wonderful schizophrenia about it, with aromas that suggest sweetness while in actuality being a relatively dry wine on the palate,” says Kirk Peterson, Italian Wine Ambassador (Vinitaly). “The grapes – unsurprisingly the ones classically used for these styles of wine – develop entirely new flavors and aromas when dried, offering greater complexity to the resulting wines.”

Seemingly a serendipitous marriage of vine varietals and terroir, wine producers, such as MASI, Allegrini, and Zýmē, among others, embrace what nature has gifted them with and craft an intricate suite of complex wine styles based on different levels of grape drying and varying winemaking strategies.

“It is not by chance that the main area to air-dry grapes in Italy is in Veneto. In Valpolicella, where the weather can be cool, grapes need the chance to ripen and drying was (and still is) a logical option,” says Juan Lizzaragua, Italian Wine Ambassador (Vinitaly).  “Ancient Romans air-dried everything virtually not just out of necessity, but also it was their tradition.”

Perfectly-ripe grapes are harvested cluster-by-cluster and snipped from the vine over a span of time that is in tune with nature. They are then laid to rest to dry on wooden shelves in well-ventilated chambers for the next four or five months.

“The drying of grapes has several advantages in winemaking,” says Peterson.  “By decreasing the water content of grapes, flavor molecules and sugars become concentrated, while simultaneously tannin is reduced.  In dry wines this additional sugar ferments into higher levels of alcohol granting the wines more weight and mouth-feel which is also complimented by the softening of tannins.”

Only after the drying process is completed are the grapes de-stemmed, pressed and fermented into wine. The finished wine features signature characteristics of complex dried-fruit tones, a deep hue, alcoholic heft and velvety feel.

Along with Amarone della Valpolicella, another red and dry wine made from dried grapes is Sforzato di Valtellina (Sfursat di Valtellina) from the Sondrio province in the Lombardia region. Vineyards are located on steep terraces which are cultivated by hand and carried on the shoulders along narrow, sloped paths. Once harvested, whole bunches are laid out on straw mats in well-ventilated cellars – with the help of the region’s breva wind- where they remain for three or four months. The classic Sforzato wine is full-bodied, high in alcohol and offers complex aromas of sweet spices, such as licorice, cloves and cinnamon,  prunes, raisins, and the hint of tar and roses which gives away its base ingredient, Chiavennasca, the Valtellinese name for Nebbiolo. 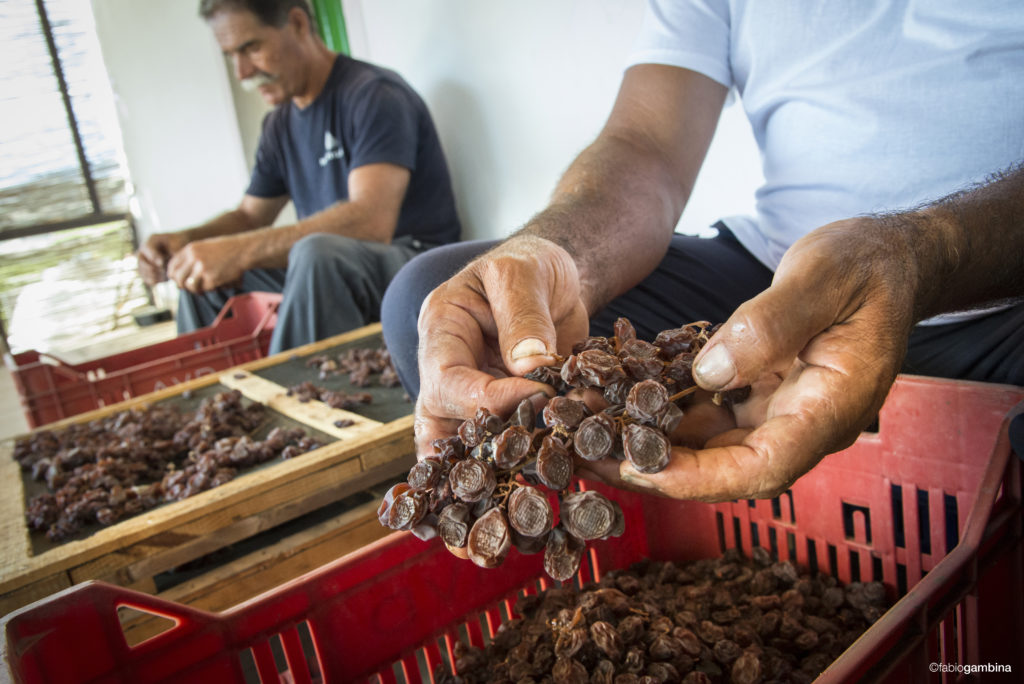 On the volcanic island of Pantelleria, located between Sicily and Africa, the hot and windy climate provides ideal conditions for concentrating a treasure trove of sugars and developing a kaleidoscope of aromas from a grape called zibibbo (Moscato d’Alessandria). The dessert wine is made using a production process based on natural raisining of these intensely aromatic grapes, which are laid out on racks, manual stripped from the stems then undergo a carefully tailored vinification process.

Similalry, Torcolato is another famous dessert wine from the Veneto. Torcolato is made by producer, Maculan, from native Vespaiolo grapes which have been lightly affected by botrytis, then tied in clusters with twine and hung from the ceiling to ensure perfect drying.  These hanging clusters form a twisted rope, thus explaining the wine name “torcolato” which, in local dialect, loosely translates as “twisted.” The tall windows on the top floor of the Maculan winery expose the grapes to the warmth of the afternoon sun and the chill of wintry nights. The result is an opulently mellow, golden dessert wine.

Producers of extraordinary these wines  are the result of winemaking that is beyond reproach and from selected grapes from only the best vineyards.  Sweet to dry, they are the wines that evoke emotion and spellbinding rapture.