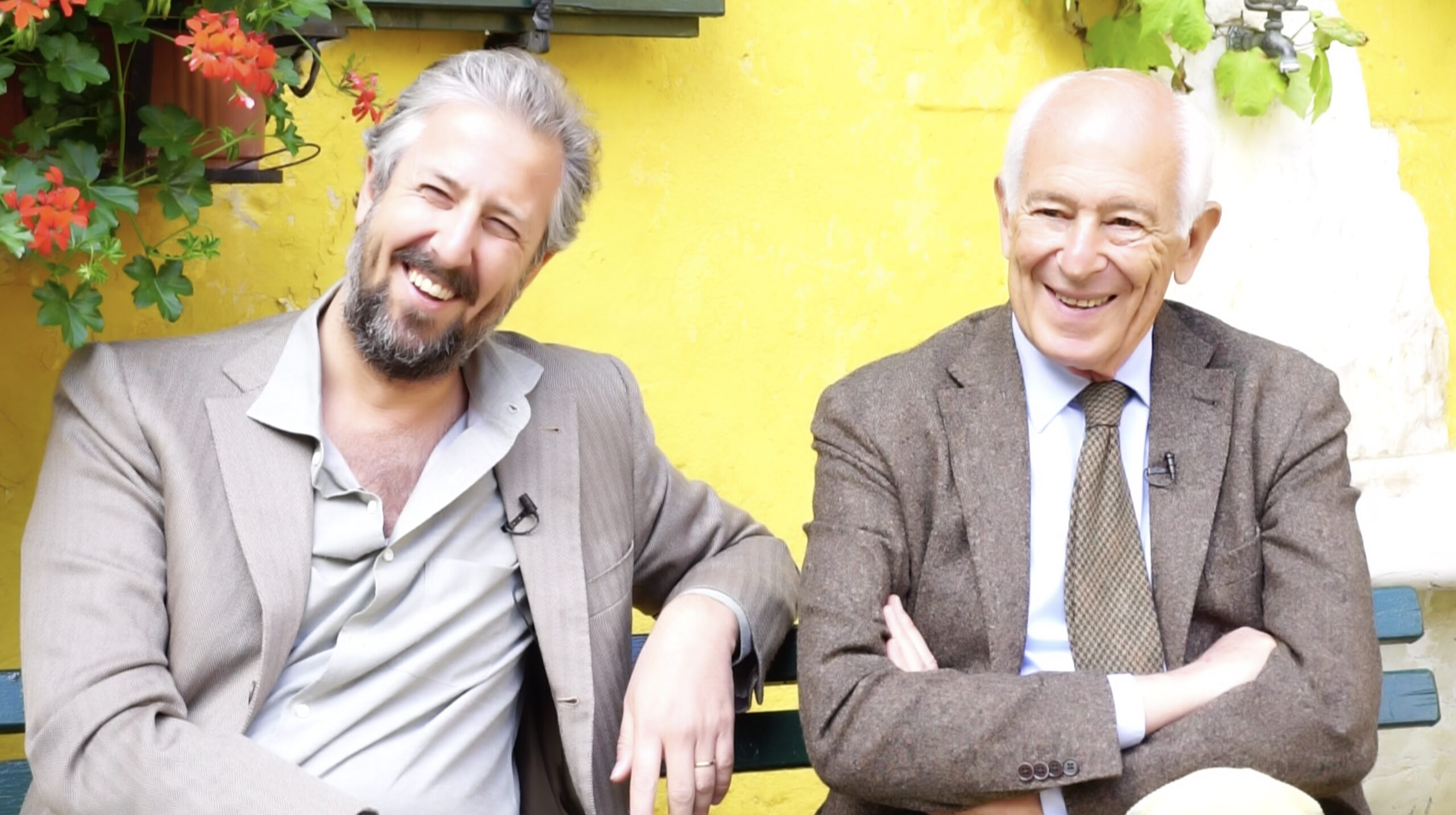 Tenuta San Leonardo is cradled in a sliver of geography where the gentle vastness of the Veneto rises to the dramatic Dolomites at the southern edge of Trentino. This majestic corner of the world is also home to one of Italy’s most unapologetically artisanal wines. Yet, not far outside the hamlet walls of San Leonardo, the sub-Alpine region is dotted with abandoned stone buildings along the Adige River, which remind of a time when Italians scrambled amid the din of explosions and gunfire during the World Wars. Historical events shaped this land and have been penned in many diaries, but perhaps the most enchanting part of history is still in the making. One visit is a glimpse into the next chapter.

Upon arrival, the gates at San Leonardo were closed, but from an adjoining road-side tasting room came voices and laughter. Immediately outside were sleek road bikes haphazardly parked and waiting for their riders inside, when a distinguished-looking gentleman in mustard-colored corduroy pants and a coordinating tweed blazer noticed me, nearly late for my appointment.

“Buongiorno!” I said. “Journalista from America!”
He smiled and said, “Come follow me.” This tall man with silver hair and lean, broad shoulders accompanied me to the entrance, and within seconds the gates rolled open.

Just then did I realize I was standing before nobility when he said, “I’m Carlo, the owner.”

Indeed, this was the Marchese Carlo Guerrieri Gonzaga.  “Anselmo and I will both be with you today,” he said with a gentle smile.

Both father and his son, Marchese Anselmo, displayed urbane charm and the tight-knit relations one would expect from this distinct stratum of society.  My colleague told me to assume a “proper” experience. And it was, by way of the American flag flying in their courtyard (they confirmed later it was for my arrival), pristine grounds, and an ever-so attentive staff, just to name a few. Yet, almost instantly, I was embraced by their genuine congeniality. It was as casual as their winery dog, Barrique, who laid there, loose-lipped and snoring on the polished cobblestone driveway while catching the warmth of the sun. So naturally, the scheduled one hour interview turned into seven.

Next to the dog sat Marchese Carlo’s putty-colored refurbished 1960s Jeep. The 80-something Italian marquis was a skilled enthusiast of restored farm equipment and vintage vehicles. He considered this to be his everyday ranch transport. And it would take us on a ride through his sprawling 300-hectare estate.

Situated in the southern portion of the Trentino region, San Leonardo was once a monastery, but today it is a hamlet synonymous with one of the nation’s most significant wine treasures. The estate came into their family at the end of the 19th century via Marchese Carlo’s grandmother, who bought it from the church.

“My great, great, great grandfather was a passionate enologist,” said Marchese Anselmo.  He purchased Riesling from the Rheingau, Pinot Noir from Burgundy, and probably Carménère from Bordeaux.” Marchese Anselmo, who is fully involved in the production and management of the winery is, like his father, passionate about San Leonardo and dedicated to its cultural and physical landscapes, natural heritage, and biodiversity.

“Since the 1850s, we have taken care of international varieties, but I would say the man behind the wine that has given the boost to the estate, not only to survive but also internationally, is my father, who was the first true oenologue of the family,” he said.

So gracious and humble were these two; they could hardly accept each other’s compliments without reciprocating the gesture.

“You’re very kind, but now, for the next generation,” Marchese Carlo said while smiling at his son and patting the dog’s head.

A student of oenology in the late 1950s, Marchese Carlo worked under the influence of Sassicaia creators Piero Antinori and Mario Incisa della Rocchetta. Being at the front line of Italy’s prototype Super Tuscan, Marquis Carlo was eager to see whether similar Bordelais elegance could be drawn out of his family’s estate’s clay-limestone benchlands in Trentino 300 kilometers north.

What he found in San Leonardo was exceptional character.  For starters, he produces wine in almost in a bubble, northwest of Verona near Lake Garda, south of the sparkling wines of Trento and well outside the Valpolicella zone.

“Every afternoon, the winds come from Lake Garda,” he explained while downshifting on an incline through his estate’s back roads. The tropical trees and plants grow naturally in this region –  mature chestnuts, bananas, numerous varieties of bamboo – it’s so lush in some parts, sunlight struggles to see the earth. San Leonardo is uniquely Mediterranean at the base of the Alps.

Two principal red wines are produced here. San Leonardo is a beguiling, low-key, persistently Bordeaux-imaginable red blend made from 60% Cabernet Sauvignon, along with Carménère, Cabernet Franc, and Merlot. It’s produced only in the best vintages. Villa Gresti is a Merlot-driven blend with 10% to 15% Carménère, which results in a velvety, almost caressing, but indisputably modern wine.

“Carménère is the heart of the production of San Leonardo today,” said Marchese Anselmo, who explained that it had been growing on the estate since the mid-1850s. “It gives the typicity to our wine,” added his father. But for a long time, they actually thought they were growing Cabernet Franc.

The confusion is reasonable. Carménère was a widely planted grape in Bordeaux during the 18th century, and along with Cabernet Franc – Carménère’s parent –  the two have been credited for establishing the reputations of some of the finest estates of the Medoc. Naturally, they can be easily confused for each other. And that is what happened at San Leonardo, until the end of the 1980s when testing revealed that the estate had actually been growing Carménère since the late 1800s.

Here, in the lower stretches of the Alps, the diurnal range preserves acidity, provides depth to the grapes’ aromatics and slows the ripening process. The microclimate results in the wines that show freshness and elegance.Most of their 25-hectare vineyards are situated at a relatively low elevation of 150 meters. Merlot is planted in gravel-rich soils that were once the tributary bed of the Adige River. Sandier soils host Cabernet Franc, Cabernet Sauvignon, and the venerable Carménère.

“Good wine is done in the country and not in the cellar,” Marchese Carlo said.

Dirt roads led to a clearing to reveal the family’s Villa Gresti mansion, his seasonal home during the warmer months. The gardens which surrounded it was a result of his incessant, but discreet dedication. In addition to apologizing for not having a fully blooming rose garden, he also mentioned that the home was the location of the signing of the preliminary armistice between Italy and Austria-Hungary, marking the end of the First World War. Then, 25 years later, it became a German Wehrmacht base that the American Army attempted to bomb during WWII, but missed because of its proximity to the mountains. One can’t help but to connect the historical significance to the soul of San Leonardo every time the wine is poured in the glass.

Returning back to home-base, the picturesque buildings which surround the courtyard retain the Trentino style architecture.  Painted in mustard yellow with green shutters, trimmed with flower boxes, the buildings contain offices, the cellar, a museum of agriculture implements, a collection of ancient working tractors, a fleet of estate Fiat 500s – painted in camouflage tones –  and a chapel with remarkable frescoes dating back to the 1200s.

Standing in the chapel’s peaceful nave, which was bombed during the second World War then restored, Marchese Carlo pointed to where his ancestors are buried, including his grandmother, Marchesa Gemma De Gresti Guerrieri Gonzaga.  This extraordinary woman of courage and heart took in Italian-speaking Austro-Hungarian soldiers who were prisoners in Russia during the First World War right onto these grounds.  In all, eleven thousand troops found refuge at San Leonardo, aptly named after the patron saint of prisoners.

“Yes, we are all family here,” he said. Farm animals, winery dogs, generations of estate employees, descendants of the war have all regarded San Leonardo as a place for nature’s bounty, but even more so, a place of home. And both father and son feel profoundly compelled to keep San Leonardo alive and successful for the livelihood of all who live here.

At lunchtime, we ascend a set of outdoor, wooden stairs to arrive at a modest apartment.  “The is where we sleep when we are here,” says Marchese Anselmo. Furnished with a cozy couch and chairs, Barrique had already made herself comfortable in her favorite napping position. The living room adjoined a small kitchen with a table in the center.  The meal was simple and delicious and prepared by one of their employees, Linda.
“She and her family have been with us for a long time,” says Marchese Carlo. His face, which showed the pride of having been able to provide them with a respectable living, only mirrored how grateful he was to have them.

Then, Marchese Anselmo places a dish of ground pepper on the table.  “I like to put this on my pasta,” he said. “It’s spicy, if you like it.” Who could resist the personal recommendation?

Throughout lunch we enjoyed tomato-based pasta – spiked with pepper – and between sips of San Leonardo 2007 and 2014, Marchese Anselmo and his father spoke of their signature style, which has remained unchanged even when wine critics awarded high scores to trendy, oaky, wines.

“We have a passion for international grapes made in the style of what my father intended in 1982 when he created the San Leonardo,” says Marchese Anselmo.  “It was a simple method – dividing every grape, ripening at the right stage, fermenting separately, aging in barrels… in the 1980s this was innovative. Today, we are considered a classic.  It’s not about making the best wine possible. It’s about making the best wine possible in the style of San Leonardo. This is our passion and vision.”

As a whole, the Trentino wine-growing region is less recognized than San Leonardo, and this slightly irritates the Guerrieri Gonzagas.

“If we think of Tuscany or Piedmont, so many entrepreneurs have put their sweat and soul in their work, like we do.  It would have been much easier to be better known [as a region],” says Marchese Anselmo. “But on the other side,  we have become a small icon. We are very focused on elegance, freshness, low alcohol, thanks to the mountains around us that have given us a great identity.”

Their wines are unflinching tributes to the vision of the family over generations, and to the terroir of the estate. Certainly an Italian classic, but not just one of the greatest Bordeaux blends of Italy, but one of the most honest, respectful wines in the world that fill their hearts to capacity because of their people.

On the way out, I look back on the Carménère vineyard to notice the high rising mountains that surround this isolated gem. The feeling is that of persistent beauty, maturity, and contemplation. These majestic rocks have remained unchanged through time. Having witnessed history much like San Leonardo who has risen over tumultuous times, these mountains are the region’s patriarchs with the Marchesi as their greatest custodians – preserving and commemorating their heritage all while paving their legacy.