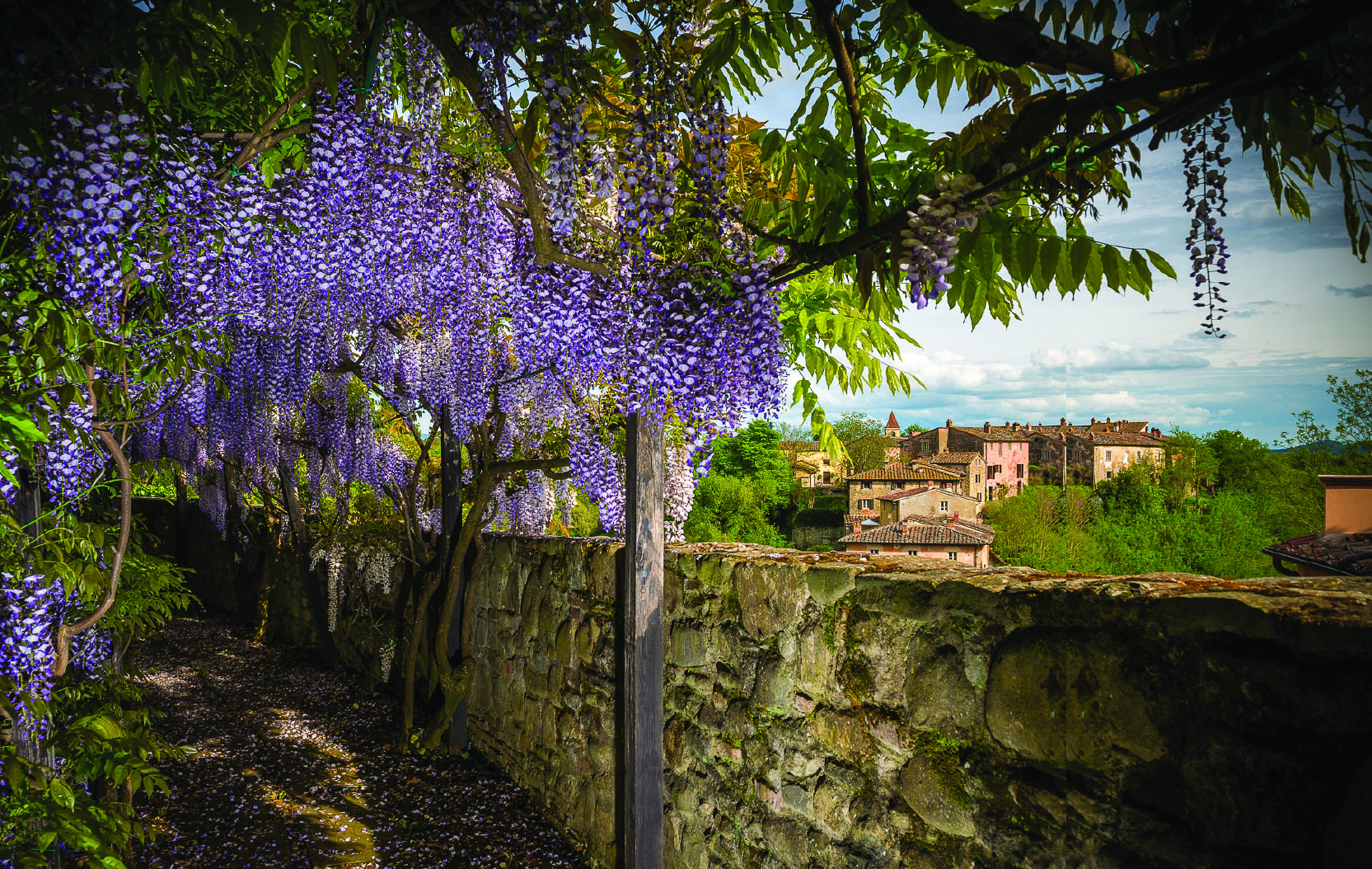 Nestled within the splendor of the Tuscan countryside is the magical Il Borro, a world-class vineyard-resort, borne of a 1000-year-old medieval- era village, which charms its privileged guests with luxe accommodations, surrounded by vineyards and olive trees as far as the eye can see.

Il Borro is owned by the illustrious Ferragamo family, whose internationally renowned fashion empire has served as a beacon of luxury for nearly a century. While the global fashion business lives on, Salvatore Ferragamo, the younger (namesake), athletic, blue-eyed grandson and visionary entrepreneur followed his personal venture to build his family’s estate.

Lavish hospitality and wine are at the heart of Ferragamo’s Il Borro, but the fundamental ideals are shared with the family in that perseverance is key, beauty is timeless and nothing less than excellence is acceptable. Il Borro is a journey into the heart of the Tuscan winemaking tradition, where sustainability and respect for the vine and territory are the guiding principals, as is retaining the soul and spirit of this historic place.

Located a few kilometers from the village of San Giustino Valdarno in Tuscany, Italy, not far from Arezzo and about an hour’s drive from Florence. Ferruccio Ferragamo, son of the late Salvatore Ferragamo, acquired the estate in 1993 from the Duke of Aosta, after having spent many years hunting there and relaxing with his family.

But, at the time of purchase, the 1,750-acre Il Borro was a semi-rundown medieval hamlet, and its neighboring grand villa had been destroyed during the World War II. His son, Salvatore, had his sights set on doing something special with it. Like his grandfather, he was driven by the idea of starting from nothing.

“I was excited by the opportunity to do something totally new,” he said.

After years of pouring love into its renovation, Ferragamo witnessed the rebirth of Il Borro. Today it is a charming village that is home to a luxurious Relais & Châteaux resort, complete with a wellness sanctuary, fine dining, and more than 100 acres dedicated to vineyards, olive trees, a bounty of produce and world-class wines. The vision always had been to preserve tradition and culture, and operate with great environmental awareness.

“Our village has a negative carbon footprint,” said Ferragamo of Il Borro. “We produce three times more electricity than we use. We do not want to make a huge impact on the land.

“These are old buildings. We have retained the old wooden beams, which are classic to Tuscany; added some windows, which are more contemporary. This place is more about its natural beauty and preserving its own culture.”

The family began restoring the vineyards upon purchase. Il Borro’s vineyards, geologically marked by the great lake that covered the entire valley in the Pliocene Epoch, left an enduring legacy in the composition of the soil. The bedrock matrix is sandstone beneath a loam-rich soil with a sandy-clay that provided the impetus for Ferruccio and Salvatore to initiate a winemaking revival at Il Borro in 1995. With great respect for the environment, everything produced at Il Borro is organically grown. In 2012, the conversion to biodynamic agriculture began with the aim to cultivate an even more fertile soil and produce a higher-quality product.

“Our love for this land is uppermost in everything we do,” said Ferragamo. “A shared commitment to renewable energy and the use of natural fertilizer, of course; and pesticides—never.”

Biodynamic agriculture involves managing a farm utilizing the principles of a living organism. It is essentially a holistic view of agriculture, and some say that biodynamics “invites nature back in.” Ferragamo shares a few of his practices.

“We hang tea bags containing predator insects to eat the little red spiders in the vineyard,” he said. “The spiders are harmless, except for the fact that they put a little hole in the grape, which causes it to leak and eventually rot.”

When the bags are hung throughout the vineyard, nature takes its course, as the insects naturally eliminate the red spiders. Another method of pest control is the use of cow horns and manure.

“We have cattle (from our cattle business), and we take the horns, pack them with manure, bury them in the ground, and when we uncover them, the manure has turned to dust.”

This dust is then mixed in a copper cauldron to produce a solution that is sprayed in the vineyards to prevent pests.

“And the wines taste the same or even better than wines produced that are not organic or using the biodynamic method,” he said of his 10,000-case production. “We don’t make a lot of wine, but make wines that stand on their own.”

Ferragamo says that every variety has found its ideal terroir at Il Borro. Sangiovese, Merlot, Syrah, Petit Verdot, Cabernet Sauvignon, and Chardonnay grapes are hand-harvested and selected with care, de-stemmed, pressed, and conveyed into steel and wood vats for fermentation.

The result of his commitment is expressed in the Il Borro labels, now known worldwide, and the recipients of prestigious rankings and accolades from the Italian and international wine industry.

Ferragamo takes great pride in carrying on the family name, yet his labels do not bear the Ferragamo name.

“We keep the businesses separate,” he said. “It is a huge privilege that I carry my grandfather’s name. It is a tradition in Italy where the grandfather’s name goes to the first boy of the first son, but having the same name would be diluting the name just to exploit it for the other businesses. And, for my family, that’s not taking it seriously.”

Il Borro, which means deep ravine, denotes the valley created by the Arno River. In essence, the long-forgotten past has meandered its way to revival under the attention of Salvatore. While encouraging the cycle of nature, he unravels the allure of Il Borro and turns a simple fruit into luscious wine.

But, in keeping with the respect for the heritage handed down to him, he said, “What we have in common as a family is the great attention to detail and quality. This is what we have done, and it’s definitely part of our DNA.”