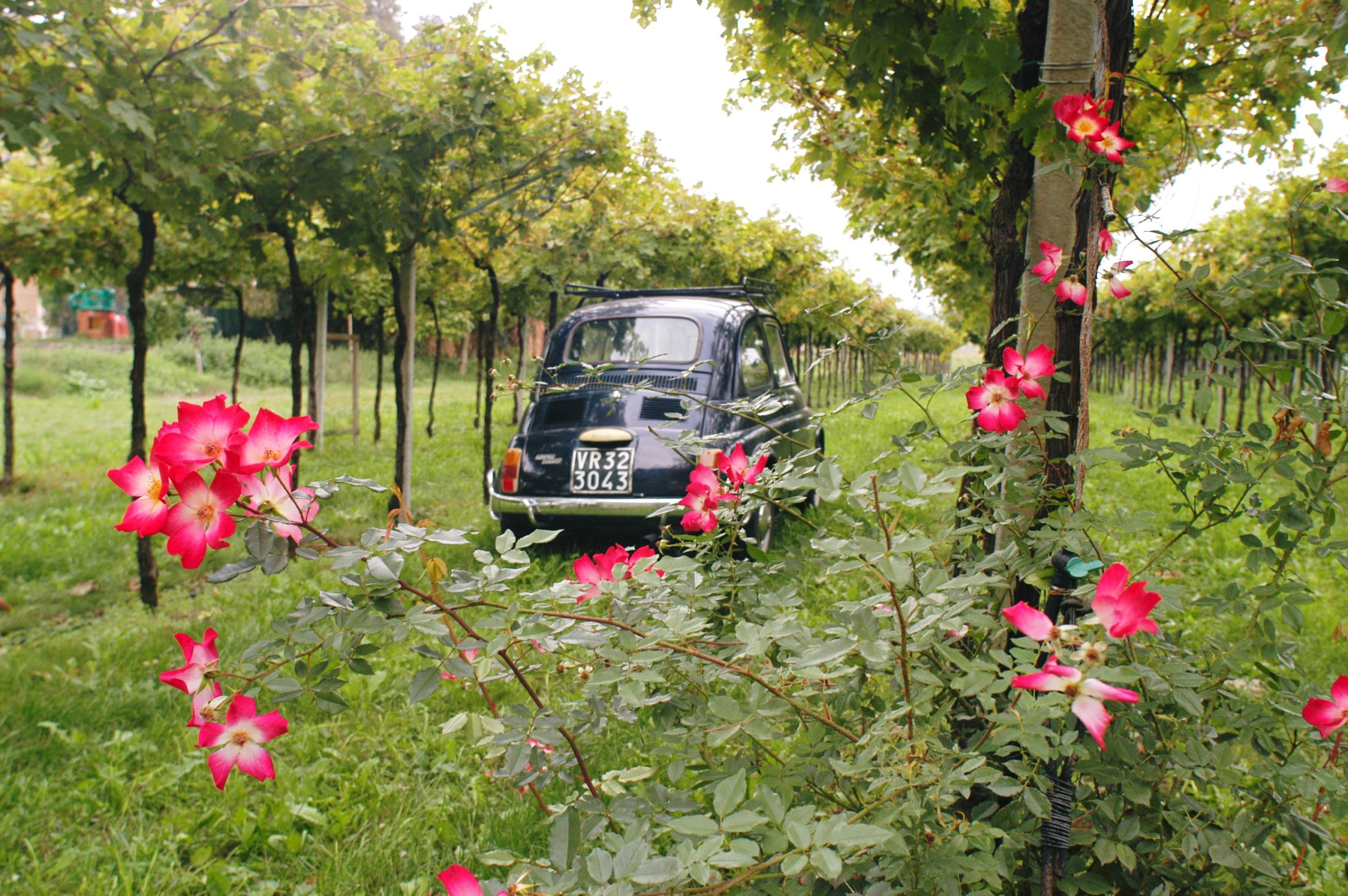 The illustrious Amarone della Valpolicella lends a mouth-coating texture with an illusion of sweetness, yet the wines are fermented dry. Spellbinding, even magical, delicious, pricey, and worth it, Amarone is the product of love and devotion that is distinctively Veronese and inherently Italian.

The road trip from Lake Garda to Valpolicella was filled with intriguing views. Zig zags met up with passes over the Adige River, quaint churches, and abandoned forts among a verdant fabric of lemon groves, cherry and olive trees and kiwi, all commingling with the vineyards of the Veneto. Gentle hills showcased rows upon rows of Pergola Veronese, a traditional vine system of the area, as well as the newer “Pergoletta Speri” system.

It was cool and breezy when I arrived at Speri, one of the oldest family producers of Amarone. Situated northwest of the historical city of Verona in the fan-shaped Valpolicella region, Speri lies within the Valpolicella Classica zone. It is here where some of the most outstanding Valpolicella wines, including Amarone, are made.

Sixth generation Luca Speri greeted me in his hospitality center. His warm and genuine disposition was accompanied with a sparkle in his eyes that only someone with a passion for something great and important would possess. We descended into the cellar where he explained the process of making his family’s flagship wine.

“It starts with a good vintage,” says Speri, while walking through the cool, echoey cellar. “For as long as we’ve been making Amarone, we have only made it in a good vintage. Amarone is technically a complex wine to make. It takes time, and the grapes have to be perfect.”

As one of the oldest families to produce Amarone, the winery has focused its greatest efforts in this regionally-specific darling made of partially dried grapes and has made historical contributions along the way.

Speri made it evident that the making of Amarone requires all the qualities of love: time, commitment, nurturing, patience, know-how, and respect. Respect for the terroir, the biodiversity of the land, and time-honored traditions also mean having a deep appreciation for the fruit – right down to every last hand-picked cluster.

Naturally, selecting the choicest grapes has always been an important consideration to the Speri family. During the early to mid-1900s, Speri’s great grandfather, Benedetto, made a point of trying the homemade wines of neighboring farmers to get an idea of where to buy the best grapes of the vintage. Say, where one farmer might grow the best Corvina on a hillside, another farmer might produce a good Molinara across the valley. Benedetto was also credited for purchasing the original land and also Sant’Urbano, the family’s acclaimed single vineyard, where the fruit for the Amarone is grown.

Amarone has always been made with partially-dried native grapes of the area – principally Corvina, Corvinone (not related to Corvina), Rondinella – along with other grapes including Molinara and to a lesser extent, Oseleta.

“These grapes have very big berries and lots of juice, and their skins are quite tough,” says Speri. “These are the two elements that make these grapes suitable for the drying process because even after 100 days of drying and losing up to 45% of their weight, there is still juice in it to make wine.”

The grapes are hand-picked and carefully graded to select only loosely-clustered bunches. These possess the greatest characteristics for long, natural drying. They are then dried for months on traditional arele wooden and bamboo racks, spaced well-distanced from each other to promote ventilation. This drying technique is called appassimento, which gives rise to a desirable and fascinating transformation yielding a concentration of sugars and flavor molecules, while at the same time boosting glycerol levels which enhance the wine’s distinctive velvety texture.

One of the advantages of being in the Valpolicella Classica area is its proximity to Lake Garda’s warm breezes leading to dry, sunny and breezy fall seasons needed to raisinate the grapes.

Wine expert and educator Kirk Peterson once told me, “They develop entirely new flavors and aromas when dried, offering greater complexity to the resulting wines. Amarone della Valpolicella in general tends to have this wonderful schizophrenia about it, with aromas that suggest sweetness while in actuality being a relatively dry wine on the palate.”

Speri’s single vineyard Amarone DOCG Classico is produced from the hillside vineyard of Sant’Urbano, which is located in Fumane, one of the five subzones of Valpolicella Classica. At the top of vineyard is a house dedicated just for the drying process. Perched at 300 meters above sea level, it  provides the perfect environment, guaranteeing a dry climate and consistent ventilation.

Italian wine authority, educator, and author of Italy’s Native Wine Grape Terroirs, Ian D’Agata, explains in his book, “It is these areas where the marogne – the typical stone wall of the Valpolicella – are used to delimit vineyards.”  Speri’s family built their walls using the vineyard’s rocks to support their steeply-terraced vineyard. The 50-year-old vines sit on light-colored earth of volcanic origin. The soil’s matrix favors the production of grapes rich with aromatic and extractive components and a level of freshness and refinement of bouquet.

D’Agata continues in his book about the Fumane subzone, “The soils are mostly calcareous and the valley is the least narrow of the three in Valpolicella Classica, and so the wines, though they don’t lack for power, also boast truly delightful and very typical spicy and floral notes.”

The love for Amarone carries on into the coldest months of winter when in January the partially dried grapes are brought into the winery, where they are softly pressed and vinified.

“Technically, it’s one of the most complex wines to make in the world,” says Speri. “The grapes arrive when it is very cold outside and we put it in the tank to slowly raise the temperature over 7-8 days.”

Kept on the lower end of the temperature spectrum, Amarone’s fermentation lasts anywhere from 40-50 days. This allows for longer extraction and greater preservation of aromas and flavors.  “We also want to maintain the freshness and crunchiness of the fruit,” he says.

While the Speri family is one of the oldest to produce wines of the region, including Amarone, Amarone della Valpolicella, itself, is actually a fairly recent development. To become more familiar with Amarone, one must look at the history of the Recioto, the sweet red wine of the area, also made from dried grapes.

The Recioto della Valpolicella is the heart of the history and tradition of Valpolicella dating back to at least the Roman era. Then in the 1950s, the discovery of a dry version came to be as some say was a result of a forgotten barrel of Recioto.

“Legend says that grapes were left in the barrel to ferment during the World War,” says Speri. “It was a warm winter, so fermentation didn’t stop and the wine became dry. They said, ‘it’s not sweet anymore, it’s amaro’ which means bitter – the opposite of sweet.”

Certainly, it wasn’t Recioto anymore. Instead it was a bold, dryer wine, and up until 1989 this new dry version was called Recioto della Valpolicella Amarone. Then in 1990, it was granted its own name: Amarone della Valpolicella.

“We know this deeply because my dad was the president of the Consorzio when he wrote and signed the laws defining the two different wines,” says Speri.

Over the years, the seemingly serendipitous marriage of grape varieties and terroir have prompted Amarone producers to embrace what nature has gifted them with and craft a complex and beguiling wine that has won the world over.

The attraction for many is the sensuality in every bottle, often described by its luscious aromas of cherry liqueur, black fig, with flavors of chocolate covered cherry and velvety feel. At its best Amarone is elegant with textural wealth, decidedly complex, dry with the illusion of sweet, and charming for its unanticipated freshness and energy.

A wine of this opulence comes with a price, however.

“Of course it does, but it’s technique and knowledge that is in Amarone,” says Speri. “The average age of our grape pickers is 65 years old. They have the skill and knowledge to see healthy grapes.” And only when the grapes selected for drying are of the highest level and when the winemaking is above reproach can an Amarone be a wine of magnitude such as Speri’s.

Just then, Speri stopped at one of the oldest barrels in the cellar. Running his fingers across this wooden capsule of time reminded me of how one of Valpolicella’s most respected older families carefully guard their traditions.

Later that evening in nearby Verona I checked into the historic Antica Bottega del Vino and attempted to do what Benedetto (Speri’s great grandfather) did, by seeking out the wines of his neighbors. Owned by Amarone families, including Speri, the famously convivial gathering spot offered a wealth of Amarone styles, ranging from high-toned and bright, to hedonistic expressions. Clearly, Amarone could not be more greatly tied to its land. Each sip displayed a serendipitous splendor that only Amarone could possess – infinitely bound by time and love – then generously shared.