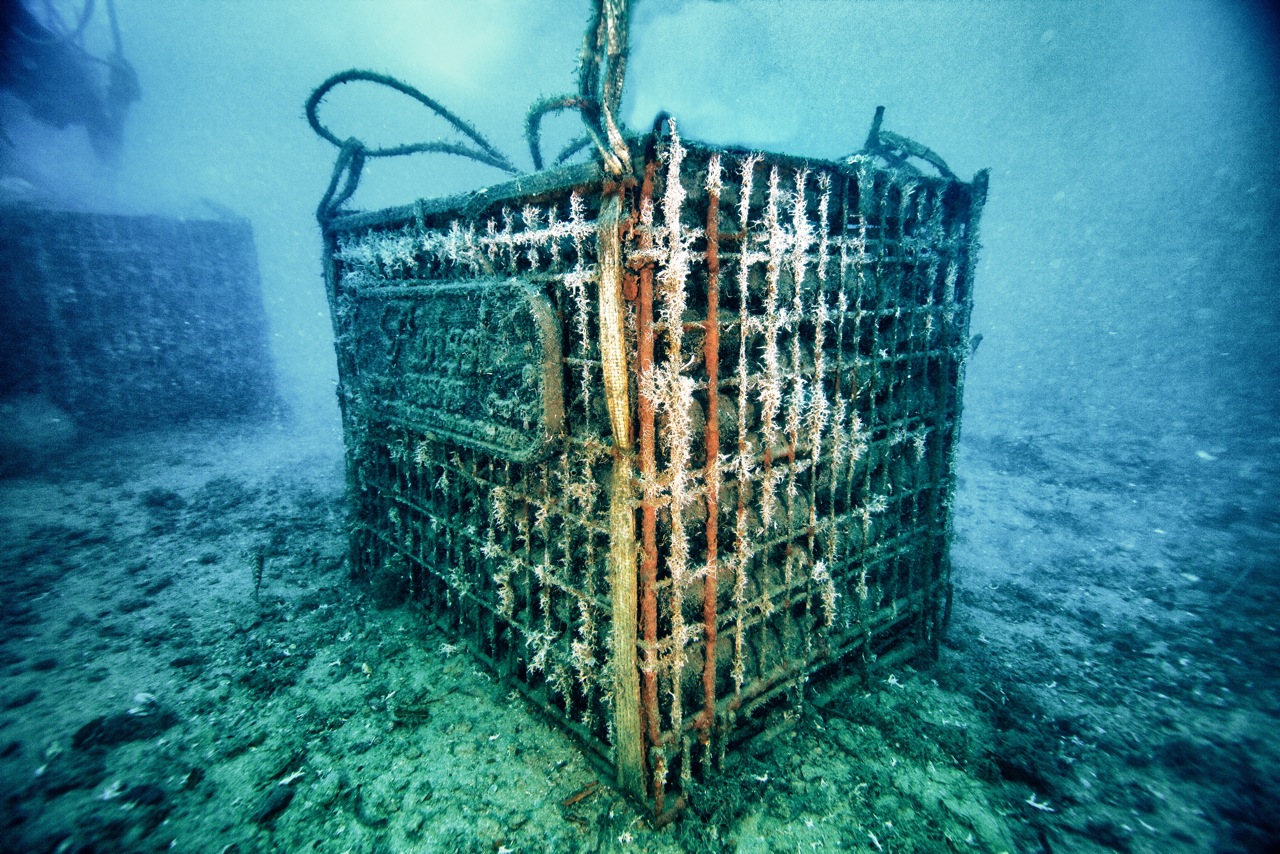 Every now and then, a story will rise to the surface about how a team of divers discovered a shipwreck containing jewels off the coast of some remote archipelago.  A most recent discovery was 168 bottles of bubbly from several Champagne houses, including Veuve Clicquot, recovered from the remains of a trade schooner that sank over 170 years ago in the Baltic Sea.

A chemical and sensory analysis of the deep sea libation revealed insight into 19th-century winemaking and the ocean’s potential to preserve a wine beyond its average lifespan on land. It also sparked further interest by winemakers for the potential of deep-sea aging, with the belief that the ocean provides the perfect environment to gracefully age wine – cold, dark, pressurized, and completely without oxygen.

The discovery of the ocean as an ideal temperature-controlled cellar has yielded a surge of new sea-sunken-aged wines. Some are designed as trials, while others part of their commercial production.  Examples of bubbles from the ocean exist from Napa’s Mira Winery, to Santorini’s Gaia winery, Raul Perez in Rias Baixas, Spain, and the Bisson estate in Liguria, Italy, among others.

Bisson’s Piero Lugano was one of the first to take the plunge into sea cellaring simply because the Cinque Terre wine merchant turned winemaker, didn’t have enough room to store his “metodo classico” sparking wine.

“The sea is my other passion,” says Lugano, who is originally from the fishing village of Canogli.  “I thought about the discoveries of shipwrecks, often carrying amphorae filled with wine and olive oil.  The preservation potential is unbelievable!”

Lugano has been sinking bottles of his spumante to the depths of 60 meters off the coast of Portofino since 2009. The wine, aptly name Abissi (abyss), is made from local grape varieties Vermentino and Bianchetti Genovese, bottled-fermented in the classic manner, sealed with a plastic sheath, then housed in a steel cage that holds approximately 500 bottles.  The cages are then lowered into the sea and remain submerged between13-18 months. In 2015, approximately 30,000 bottles took the plunge. 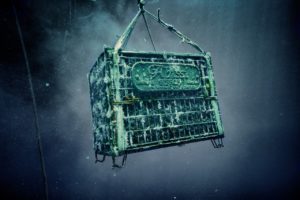 “It’s better than even the best underground cellar,” Lugano says.  “At the depths of 40-60 meters the temperature is perfect (15°C), there’s no oxygen, and the movement of the currents during heavy storms acts like natural riddling on the bottles.”

Abissi emerges from the depths usually covered in small crustaceans, barnacles and other sea-life and is sold as is.  “Each bottle is unique, representing a place that is full of mystery and charm.”   However, he stresses that it is what’s inside the bottles that makes his spumante so desirable.  “My motto has always been to produce a wine that pleases me – not leaving off any detail in order to obtain the highest quality.”

Abissi is a typical Ligurian wine, where vineyards of this slender and rugged coastal region catch the spray from the sea. People who have tried it comment on the fine bubbles, crisp acidity, and complex saline and mineral flavors.

“Given that the land is close to the sea, minerals and salts are deposited into the [grape] bunches and stay through development and maturation,” says Lugano.  “The flavor is rich, intense, diverse with notes of salt, mineral and dew all in the context of extreme cleanliness.”

Unlike wines that have taken to the sea in the bottle—such as Bisson Abissi, the ocean leaves an indelible imprint upon Julie Benau’s wine made of Picpoul grapes from the Languedoc region of France. Libéro by Domaine Julie Benau is kept in barrels then immersed into the water. According to Benau, the barrel creates a better environment becausethe wine is still in stage of elaboration and élevage, or the progression between fermentation and bottling.  “It continues to evolve and get is characteristics during the immersion.” 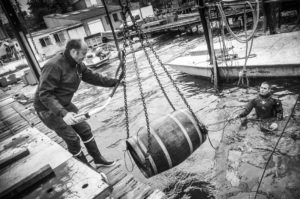 Benau’s 250-liter barriques are lowered to eight meters below the surface at an oyster park called Étang de Thau, which is situated less than a mile away from her vineyards. The body of water has two points of entry from the Mediterranean, which contributes to the gentle rocking motion of the barriques. The temperature remains in the constant mid-50s.

The lees in the barrel —dead yeast cells that remain as a byproduct of fermentation—are left free to circulate about with movement caused by the current, and constantly stirs the lees, as if doing battonage.

The result is “a very appealing nose, round in the mouth with complex aromas, citrus, floral, elegant and subtitle notes of wood and slightly saline finish that make you want more,” says Benau.

While winemakers from around the world like Benau have been able to taste the success of their ocean-aging efforts, Napa’s Mira Winery, who had been experimenting with again wine underwater at Charleston Harbor, South Carolina since 2011 was under scrutiny by the U.S. federal government.

“The cold water and the tides seem to expedite the aging process, and we believe that our ocean-aged fine wine—which we’ve trademarked as Aquaoir—could revolutionize how vintners around the world think about winemaking,” says Jim Dyke, Jr., president of Mira Winery.

But according to Dyke, The Alcohol and Tobacco Tax and Trade Bureau and the Food and Drug Administration banned the winery from continuing its experiment and has since been asked to lift their wine from the harbor.

“The government said the wine bottles, which were sealed with wax and corks and stored in steel cages, were on the same level as products spilled into the sea during a shipwreck,” says Dyke.

But finally, in May 2013, Mira Winery became the first in the United States to age wine in the ocean, successfully aging 48 bottles in Charleston Harbor from February thru May of that year.

Discussion and discovery continue throughout the world. By researching the benefits of how wine is fermented and aged—temperature and lighting conditions, oxygen exposure, pressure and agitation—winemakers are using the sea to rethink how to make great wine.