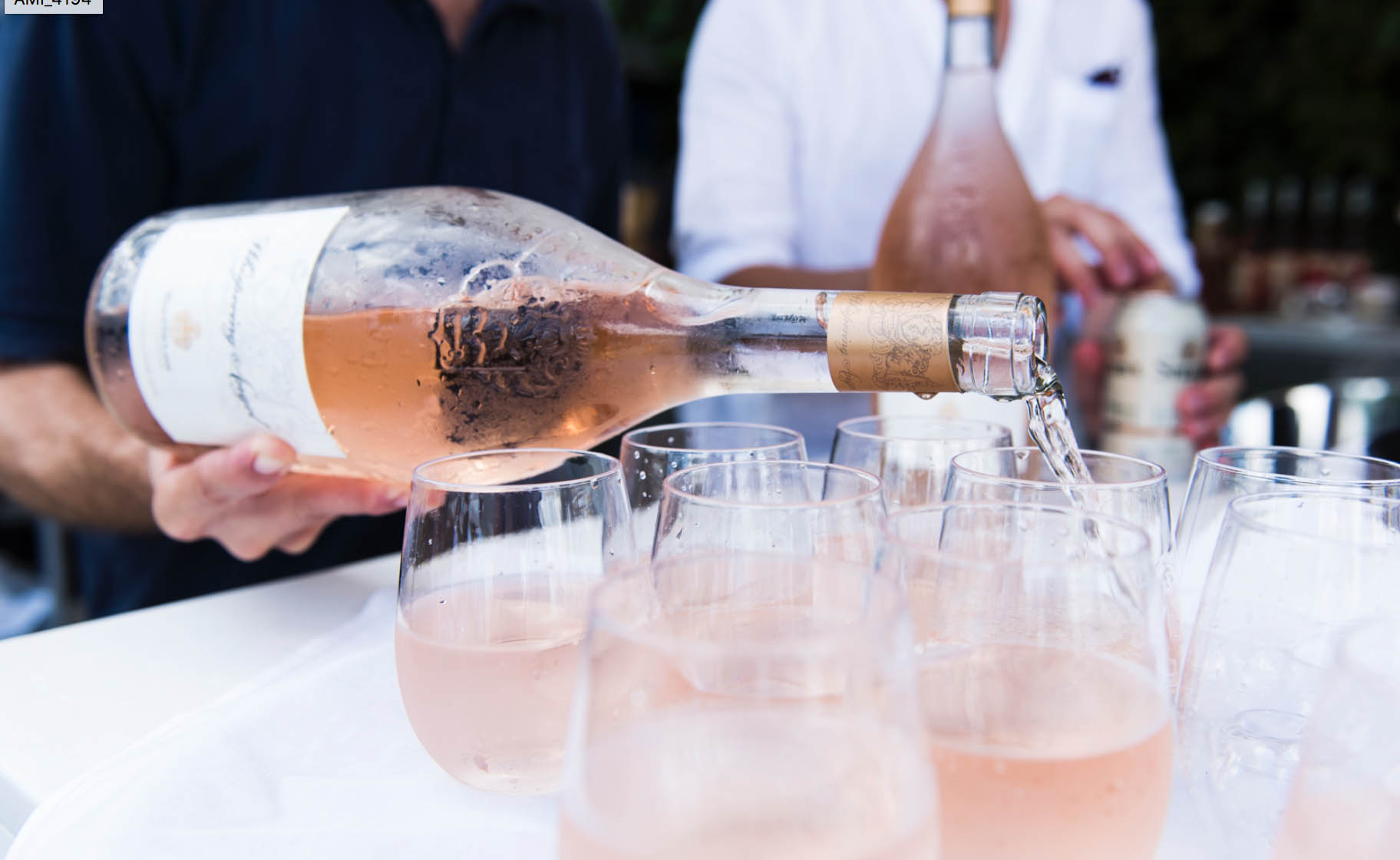 We’ve had a passionate and stormy relationship with rosés. At one time we loved and cherished them. Then we lost interest and banished them, regarding domestic rosés as our grandmother’s tipple – cheap and sweet, in the shade of her “blush.”  And while sweet wine is still widely popular today, dry rosé from Provençe has created an international rosé wine movement unlike any other. So much that being seen with a glass of it elevates our reputation and announces our sociability.

Much thanks go to an individual named Alain Riviere.

The efforts of Alain, the Frenchman behind the Whispering Angel wine altered us to re-think rosé as a pale, dry wine and to fall madly in love with it. This great shift in our thinking, which thereby created a world-wide movement, could be compared to making carrot and raisin salad groovy again. Only much, much, much more enjoyable and delicious. It took great effort.

“It’s rosé-alicious, yes?”  asks Alain with his expressive eyes,  as we sat at the bar at Shark, Chef Bobby Flay’s new spot inside Palms in Las Vegas.  The export director of Château d’Esclans was in town for Wine Spectator’s Grand Tour.  He was charming, gregarious, full of life, and loved to laugh at himself.  Why not? He was funny. Could this joy come from popularizing rosé throughout the world?  Probably.

After running his fingers through his tousled brown hair, he then placed his arms on the bar counter and said in a slightly more serious tone, “But you know, you cannot do it by yourself. I was fortunate to work for the person behind the brand, the owner of the château, Sacha Lichine. I’m only the messenger. ”

In 2006 Sacha decided that rosé demanded some respect. Together with the late renowned enologist Patrick Léon –  who had overseen wine making facilities from Mouton Rothschild to Opus One – the son of the late wine importer and Bordeaux château owner, Alexis Lichine, sold off their Château Prieure Lichine and used the money from the sale to build Château d’Esclans in Côtes de Provence. Sacha asked Alain to be part of the team.

Originally from Nantes in the Muscadet region of France, Alain moved to Dallas when he was 15 to attend boarding school.

“That’s when I took the [Texan] accent, haha,” he exclaimed.  Then went on to run the wine division of a French food purveyor in San Francisco before eventually joining Château d’Esclans.  Today he is based out of Nice, France.

Looking contemplative after a long day in Las Vegas he says, “You know Sasha doesn’t sleep much. The person is always thinking. The operation is impeccable, and he walks in the vineyard every morning.  He told me, ‘If you give a bad fish to the best chef in the world, you’ll still have a bad fish.’ So it all starts here in the vines. Wine is his passion.”

Sacha felt that rosé had strong developmental opportunities to become more serious from a production standpoint in addition to being served and enjoyed more broadly. His commitment and pioneering winemaking process resulted in Whispering Angel, the entry level wine, Rock Angel, Les Clans, and Garrus.  Undoubtedly, the success of his brand also contributed to the unprecedented growth of the rosé category while shaping an aspiring lifestyle.

Indeed, I was living that lifestyle at the bar that evening by tasting these wines – particularly developing a crush on Les Clans – while Alain was drinking a martini. He would have one more before moving on to wine.

“Stu, here, was the first to buy two pallets of the first vintage at Caesars [Palace]. Nobody cared about rosé back then.  It was courageous that Stu bought it,” he motions to Stu Roy, who was seated to the left of me.  The Director of High Image Accounts at Southern Glazer’s Wine and Spirits of Nevada and Alain go back 20 years.

“We’re so close, when one cuts the onion, the other one cries,” laughs Alain.

“You know, it [Whispering Angel] was in Mesa Grill for 10 years and Bobby [Flay] loved it so much he named one of his race horses “Whispering Angel,” says Stu.

“Anyway, there is less than a gram of sugar in Whispering Angel so I tell the ladies you can almost call it diet wine. Voila!” He reveled in his own words, as his dark brown eyes smiled behind his feather-light frames.

“He has the best jokes!” says Stu taking another sip of the Angel.

But the fast and famous Whispering Angel is also kin to one of the most expense rosés on the market, Garrus, also a D’Esclans offering. Made from fruit of vintage Grenache and Rolle (Vermentino) grapevines, the wine has the potential to age for five to 10 years.

Suddenly, out of his pocket comes something to complete the joys of rosé, the coveted Whispering Angel tattoo.  Not pink, but gold, maybe even rose gold in color. Indeed, it was just a small slice of this rosé phenomenon and lifestyle, which has taken over the Hamptons and South Beach, to festive Côte d’Azur weekend jaunts and exhibited by Instagram hashtags that go for miles below a refreshing photo of a rosé or a boomerang of clinking glasses.

“Alain beat the streets and put rosé in 107 countries,” says Stu. “He made everyone want to drink rosé.”

In 2006, Chateau d’Esclans produced 10,000 cases of Whispering Angel. In 2016, 360,000 cases. 2017 was the year rosé replaced French red and white wines as the top category seller in the U.S.  Approximately one in every five bottles of rosé sold in the states now comes from Chateau d’Esclans.  The brand embodies hip sophistication, vivaciousness, candor, conviviality. Total millennial madness. Wine critic Jancis Robinson called it “more palate-grabbing by far from the Provençal pink norm.”

As he joyfully flipped through the three-inch book of media clippings he carries around like a trophy, he reminded me that beyond the brand’s global dominance,  he and Sacha have always been committed to growing the category. This has made fellow growers, winemakers and consumers alike pleased to be in the pink. Overall, rosé imported to the United States is projected to reach 3 million cases by 2020.  Less than a decade ago, rosés from Provence stood at just 123,000 cases in the U.S. market.

What is the key to his success? “Persistence, I think so,” says Alain.  “I dedicated my life to it so I believe in it and honor that relationship and friendship [with Sacha].  Voila, it’s in the heart!”

As we walked out, he left me with one more thing to think about. “This is called ‘Let me blow you away!'” This time he pulled out a red, silk handkerchief from his jacket, he swiftly moved it across the air, tucked it into his fist, opened up his hands to reveal nothing. Then after a few more fancy hand motions, voila!  The handkerchief reappeared.

Magic. But the biggest applause goes to the rosé appearing in everyone’s glass.