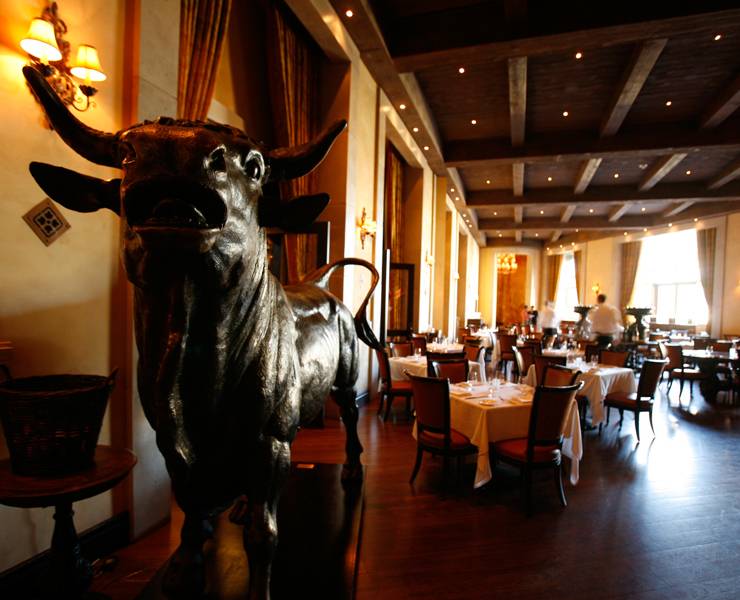 Bodacious, the bronze bovine centurion, known to have been the most dangerous bucking bull in the rodeo ring, stands guard at the entrance to Carnevino Italian Steakhouse. His sheer size indicates what you’re in for when you enter this celebrated steakhouse, whose vibes spin from the soul of Joe Bastianich: Bold and ethereal steaks, superlative wines, voluminous dining rooms (four in all) that seem to go on forever. Everything is purposeful— nothing an afterthought—and that’s how Carnevino has maintained its success for 10 years.  Carnevino (carne indicating the highest quality meat and vino for stunning wines) is not only about unparalleled service, steaks, sips or signature Italian style; Carnevino has a lot to do with heart, passion and conscience.

Carnevino is renowned for its steaks, enough to make Bodacious buck (if he could).  They’re a proprietary blend of organic, super-prime beef, overseen by consulting partner Adam Perry Lang (who’s been dubbed by The New York Times’ Frank Bruni as a “serious carnivore”). Sourced from family-owned farms and ranches in the Western U.S., the beef is aged at Carnevino’s off-site location in a climate-controlled facility.

“Good meat starts with the rancher and the animal.  Then it’s up to us to treat it with respect and honor the animal properly,” says B&B Hospitality Group Culinary Director Nicole Brisson. Within the vast 5,000-square-foot warehouse, the continuously air-cooled aging facility has dry-aged over 300 tons of ribeyes since the restaurant’s opening in 2007. Brisson’s team checks in, weighs and tags 4,000 to 6,000 pounds of meat each week—all by hand to ensure absolute quality control.

“I think Carnevino and a few other steakhouses in the country have been in the forefront of pushing how far you can go with the age,” says Zach Allen, director for the Pacific region of Batali & Bastianich Hospitality Group.  “On average, I think we are a little longer, about 90 days or so,” says Allen.

In the kitchen, all the steaks are rubbed with sea salt, black pepper and fragrant rosemary to achieve otherworldly tenderness and flavor. If you’re lucky enough, you might score the coveted riserva steak, which is specially selected to undergo extended aging from six to 11 months.

Is it worth going through all this effort for the foot traffic who enter The Venetian and The Palazzo, diners who may have little to no understanding or knowledge of what Carnevino does to deliver them the best?

“We just want to give them the best possible experience we can,” says Brisson. “And as a chef you have a conscious. You have to love it. It’s a labor of love.”

The sublime steaks call for equally exceptional accompaniments. House-cured salumi and homemade pastas showcase the artisanal talents of the kitchen. Together with an obsessive dedication to fresh ingredients, the restaurant group set up one of Las Vegas’ first farmers market to support its own farm-to-table philosophy when they first opened.  It originated out of its off-site facility, which relocated before establishing a home at the Downtown 3rd Farmer’s Market.

“It’s an Italian sense to take the best of what is available to you and create around the dish,” says Allen, who explained how using the best available ingredients at the moment, while sourcing locally from small farmers, is ingrained in Carnevino’s culture. Even Carnevino’s mashed potatoes are elevated with the addition of creamy mascarpone cheese, precious, crispy bits of Heritage Foods USA guanciale and a luscious poached egg from California’s Chino Valley Ranchers.

And the wines are specifically selected to accompany the food. The international wine list features just over 600 selections, not including by-the-glass and sweet wine options. Its physical size of the menu tends to amaze people, but it’s nothing to be intimidated by; it’s more to be embraced.

“There really is something for everyone—whether it be rare and obscure trophy bottles or multiple large-format options—Carnevino has them, along with enough Las Vegas ‘steakhouse hits’ to satisfy the convention crowd,” says Kirk Peterson, the Las Vegas beverage director for B&B Hospitality Group. “The list has been an evolution and … became more and more of a Piemonte-focused wine list featuring great steakhouse wine: Barolo and Barbaresco, organized by commune, to draw attention and hopefully start a conversation.”

In addition to Italian pedigree woven into the food, wine, cocktails, the restaurant’s success surely also stems from the staff of 150 that ensure their guests have the best experience every time. “Our success really does come from the staff,” says Peterson.  “From the top down, we all believe that what we are doing is important. It’s something we are very passionate about.”

And that’s where ongoing education comes into play. “We invest a lot of training in our staff,” says Allen. “For example, there are three wine classes available each week.”

Peterson adds, “By the time you’re a front waiter, you know that Barolo from Serralunga is going to be more austere in its youth and tannic than wines from La Morra.”

Brisson says it could be easy to become stagnant, especially in a hotel environment. “But our company always wants to move forward. It takes extra to do it.  I feel that’s really about developing people and personalities and properly teaching them.”

Ultimately, Carnevino is best enjoyed when you can leave it up to the staff to make the experience a most memorable one. “One of the measures for success is just having people come in and sit down,” says Peterson. The best experiences are those who never look at the menu and we just take care of them. And when our staff and guests have those connections, it’s good for everyone.”