When you walk into Paid in Full (7225 S. Durango Dr., Suite 105), the eatery brought to you by chefs Michael Plourde (Suzuya Patisserie) and Jason Olson, make sure to wash your hands. Not only will you want them clean to pick up and devour the smoked salmon takoyaki and get every last ikura (salmon egg) off the plate—but you also want to visit the women’s restroom.

Whimsical pink with framed photos of bubblegum-blowing celebs, a disco ball and a unicorn trophy head, the bathroom sets the tone of the eclectic Japanese street-food and izakaya tavern. And it has bites to match the retro-pop-esque vibe that these chefs have created. Back at the table there’s more to look at: The manga-meets–New York City graffiti wall art provides splashy eye candy while you try the Phat Rice Noodles with lamb chorizo, broccoli rabe and garlic ra-yu chili oil, crispy and chewy Udon Fries (hold the sauce to a minimum), the creamy-licious crab croquette and one of the newest dishes, the beet salad. And just when you think you’ve tried every kind of prepared Brussels sprouts in town, you’ll just have to make room for them again. Paid in Full’s version is bright and tasty with sweet chili, pumpkin seeds and basil. Hey, even the haters won’t know they’re eating a cruciferous creation.

The only thing missing from Paid in Full’s picture? The distant cultural buzz around the Shibuya train station and the sounds of Pizzicato Five’s Go Go Dancer.

Head Downtown to welcome chef James Trees back to Las Vegas at Esther’s Kitchen (1130 S. Casino Center Dr.) for honest cooking that won’t disappoint. The value-driven wine list is a gem for those who want to move out of their comfort zones and try Italian wines from lesser-known regions that are absolutely stunning. And you won’t find a bottle for more than $40. 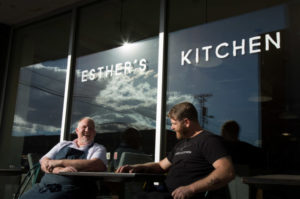 Chef James Trees (left) | Photo by Cierra Pedro
Fill your stomach with uni (sea urchin) on toast, which, by the way, Italians have been eating since ancient times. The fried cauliflower is light and tasty with anchovy, chili, garlic and capers. A simple but classic cacio e pepe is made with pecorino cheese and tellicherry peppercorn. While you swirl your fork through the house-made chitarra, swirl a glass of pecorino (wine) from the region of Abruzzo. Pecorino cheese and pecorino wine? Yes, that’s an easy-to-remember match. And make sure to try the market fish. The chef at Esther’s Kitchen uses only bycatch, giving unwanted species the opportunity to showcase their beauty on the plate.

Do take notice of the water pitchers, plates and bowls, all made by a local clay company, Clay Arts. Then turn your silverware over to notice the reclaimed Dunes Hotel flatware, clearly engraved on the back. And finally, look above the bar to find a sign that reads “Make It Better Tomorrow.” Another reason to come back.

Finally, why is there a plastic baby inside the king cake? Louisiana king cakes are on the rise because Mardi Gras is near. Covered in sugar crystals of green, yellow and purple, the light and layered confection is a cross between coffee cake and a French pastry, and the Bayou State already has starting baking them since the Epiphany (January 6) through Fat Tuesday, the last day before Lent. Each cake is baked with a plastic baby hidden inside (likely added at the end so it doesn’t melt), which is supposed to symbolize baby Jesus. If your slice has the baby in it, tradition is you’re responsible for buying next year’s cake.