“Good bread is the most fundamentally satisfying of all foods; and good bread with fresh butter, the greatest of feasts.” James Beard said this, and yet bread still gets a bad rap. While the rest of the world celebrates bread daily, anti-carb diets (and voices in our heads) keep us from the ultimate comfort food, one that has been a nutritious staple for thousands of years.

Enter the artisanal breads at Wolfgang Puck’s restaurants in Las Vegas, where each loaf shows the personality of the maker’s hand, transforming flour and water with a little “mother” love into loaves we can’t wait to devour. Kamel Guechida, corporate executive pastry chef for Wolfgang Puck Fine Dining Group, is behind this vibrant and “living” bread program, artfully creating bread on a daily basis.

“It’s a passion … well, that I have at least,” Guechida says. “The feeling that bread provides is warm and comforting, with an aroma that is at times intoxicating. When it’s fresh out of the oven—warm, reachable from the table, especially when you have an appetite—it’s a wonderful thing to enjoy.” 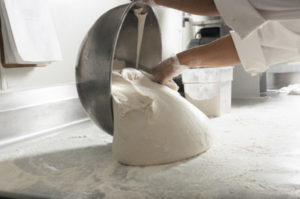 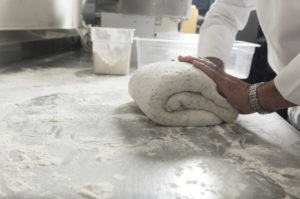 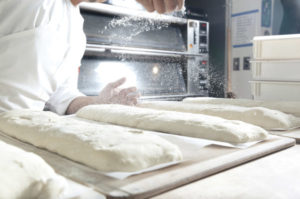 Guechida talks about bread as a living wonder. “Alors, we make this bread each day,” he says, picking up a loaf of Campagne. “It’s difficult to achieve the same shape every time because overnight, while the bread sets, the fermentation can vary due to environment factors and humidity levels, for example.” In describing the bread, he says, “I would compare it to a hard sourdough that’s just a little sweeter in taste. This isn’t a type of bread you can find in your typical grocery store, which is why we think it’s so important to have on our tables.”

Preserving the Loaf
Guechida says you should not be afraid of buying the large loaf for fear that it will go to waste. He recommends preserving the bread by cutting the loaf into halves or even thirds, then wrapping unused portions tightly in plastic and placing them in the freezer. When you’re ready to eat it, remove the bread from the freezer and allow it to thaw in the plastic. Once it’s defrosted, enjoy. It will taste as good as the day it was made.

All good artisanal bread starts with the mother, also known as the starter. Guechida, the bearer of the mother, is akin to the creator of a highly productive microscopic family—billions strong—that produces all the bread at Wolfgang Puck.

“I started the mother four years ago using grapes and apples,” Guechida says. From the walk-in refrigerator, he removes the lid off a large, food-grade rectangular container. Inside is a creamy, bubbling, slick mixture exhibiting a fresh-yet-fruity aroma. When he created this starter, Guechida allowed the fruit juices to ferment, with the idea that the natural yeasts and bacteria in them would inoculate the flour and water. The result is his signature mixture that creates the ideal condition to make his bread rise perfectly every time. “Through natural fruit fermentation, it has a lot of character and flavor,” Guechida says. “Each time we make new dough, we use a little bit from the original mother.”

Pass the Pumpernickel
Pumpernickel is a dark, dense German bread made from coarsely ground whole-grain rye. Guechida adds raisin to the dough to provide a “surprise.” “Originally, [pumpernickel] was constructed to last a long time as a ‘peasant bread,’ so to speak,” Guechida says. “When it made its way to the U.S., agents like molasses, coffee and cocoa powder were added to approximate the shades and taste of traditional German pumpernickel.” Some bakers add wheat flour to provide gluten structure and increase rising and commercial yeast to quicken the rise compared to a traditional sourdough. While it’s not as popular as the sourdough or multiseed, Guechida offers the pumpernickel at CUT inside The Palazzo, Lupo at Mandalay Bay, and it’s available for purchase each Saturday morning at Wolfgang Puck Bar & Grill Summerlin.

From there, it’s a daily routine for Guechida and his team of four. They arrive at 2 a.m. and work steadily to create the day’s orders, and all breadmaking is done by 9 a.m. and delivered to the restaurants by about 11 a.m. Within an area smaller than an urban studio apartment, they make an average of nearly 3,000 loaves a week for all of Puck’s Las Vegas restaurants, including Spago, CUT, Cucina, Lupo and both locations of Wolfgang Puck Bar & Grill. Each style of bread, from burger buns and ciabatta to cherry-walnut loaves to multiseed, receives meticulous care in its creation. For example, before baking the pumpernickel, the dough is set in a wooden basket to achieve decorative spirals on the crust. Mini baguettes start out as small pieces of dough that are formed with skilled hands to create two perfect points, then effortlessly scored and dusted with a gentle shake of sifted flour.

“Ingredients are a factor, yes, but it’s the technique that makes the difference. Making bread is a very careful task where you can’t rush the process. Be aware of time; the starter is the foundation for achieving the right texture, rise and nature of the bread; and of course, the fermentation of the yeast. It’s important for the dough to rest for 24 hours to use for the next day’s service.”

Guechida invites everyone to embrace the natural goodness of bread. Enjoy it with wine and cheese, both of which also rely on the life cycles of tiny creatures to produce some of our most tasty indulgences. And on an upcoming Saturday, stop in at Wolfgang Puck Bar & Grill Downtown Summerlin to pick up a loaf or two.