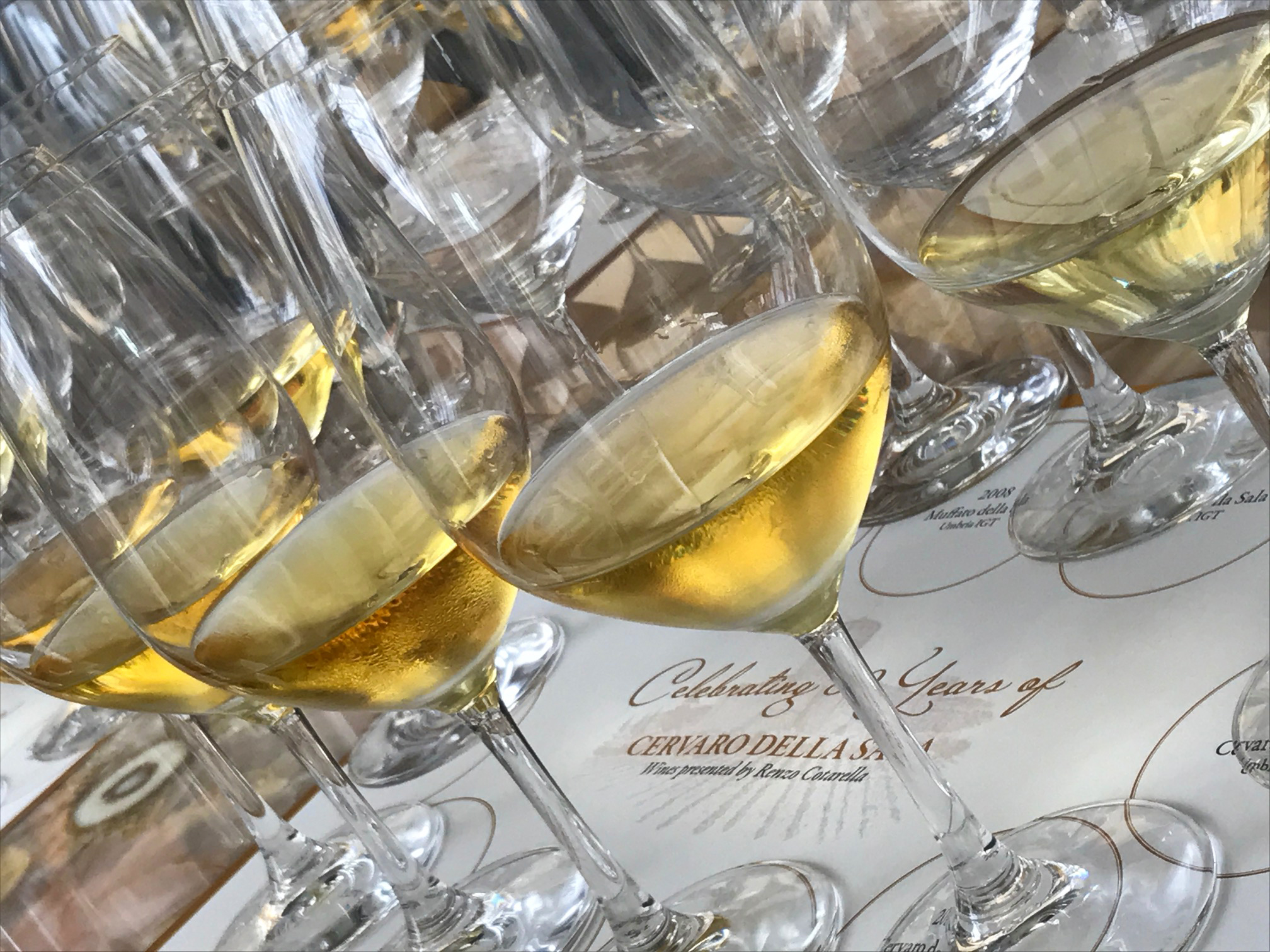 “Firsts” are special. For Renzo Cotarella, CEO of Marchesi Antinori and director of winemaking, Cervaro della Sala might as well been his first child. Excitement, loving devotion, and emotional connection for this wine was clearly evident during a vertical tasting before a group of sommeliers and myself. “This is a wine which I really love, particularly because it’s the first wine I made,” says Cotarella.

With that in mind, glasses upon glasses of Cervaro della Sala, which lined the table glimmered with deep yellow hues resembling citrine gemstones – these were shining products of their original, loving creator who stood at the head of the table. We would taste vintages dating back to 1988.

Hailing from Castello della Sala – Antinori’s Umbrian outpost and home of this flagship white – the historic estate near Orvieto dates back to the 14th century, but its wine producing history is relatively recent in terms of Antinori’s timeline.

The Antinori family purchased the property – the castle and the surrounding land – in 1940. The first vintage of Cervaro della Sala, the 1985, was released in 1987. With this birth came the subsequent life of this great wine, prized on a world-wide scale.

From vines grown amidst clay and calcareous based soils, rich in fossil shells, and the grapes are well exposed to the warmth of the rising of the sun with a much-loved diurnal shift between day and night – perfect for white wines.

“When I set foot in the Castello della Sala in the spring of 1979, I will confess that it was an emotional experience. I had been called to contribute to the production of wine of greater personality compared to those producers of the time in the Orvieto Classico appellation.”

At the time, the central regions of Tuscany and Umbria were not exactly known for their white wines. And the ones that were produced tended to oxidize shortly after release. Cotarella was charged to do better, thanks in part to Antinori, who gave him free rein to experiment. And that he did, but something struck him at the tail-end of a trip to Bordeaux when he stopped in coastal Nice for dinner. Presented at the table was a 1971 Corton-Charlemagne. Cotarella was certain it would be oxidized. Then, he tasted it.

“For me,” says Cotarella, “it was a revelation. The discovery of a white wine which not only could age well, but which had to do so, in order to fully express their potential, showed an entirely new dimension to the world of white wine,” says Cotarella. This sparked his intention to create an elegant, age-able white.

Cervaro della Sala is an exquisitely-woven blend of Chardonnay and the indigenous Grechetto di Orvieto. After early morning harvest, each grape variety is fermented separately: cold maceration, extended age on lees, malolactic fermentation, and aging in barriques for the Chardonnay, and stainless steel fermentation for Grechetto. Only then, are they assembled and bottled.

The result is a luminous straw-toned wine with the texture and complexity of white Burgundy and the snap of a cool-climate Italian white. Charming in its youth, it ages beautifully, retaining its freshness and vibrancy.

The search of a white wine of undisputed character and personality became a virtual obsession, as well as Cotarella’s desire to produce a wine that carried the spirit of the terroir and of the house which produced it. In a mere ten years, the young trained agronomist created the wines which now symbolize the work of the estate. Cervaro realized the aspirations that Antinori and Cotarella had dreamed for years.

The vertical tasting featured the 1988, 1997, 2000, 2005, 2010, and 2015 vintages. Each was unique to their vintages, from ‘88’s typical Burgundian notes of flint and tropical yellow fruits, to the clean and precise ’97 with its decidedly mineral freshness. The golden wines showed Cervaro’s graceful age-ability.

After re-living the vintages and uniqueness of each, Cotarella concluded, “A vertical tasting should never be about what vintage you like best, but about discovering the true spirit these wines have in common.”