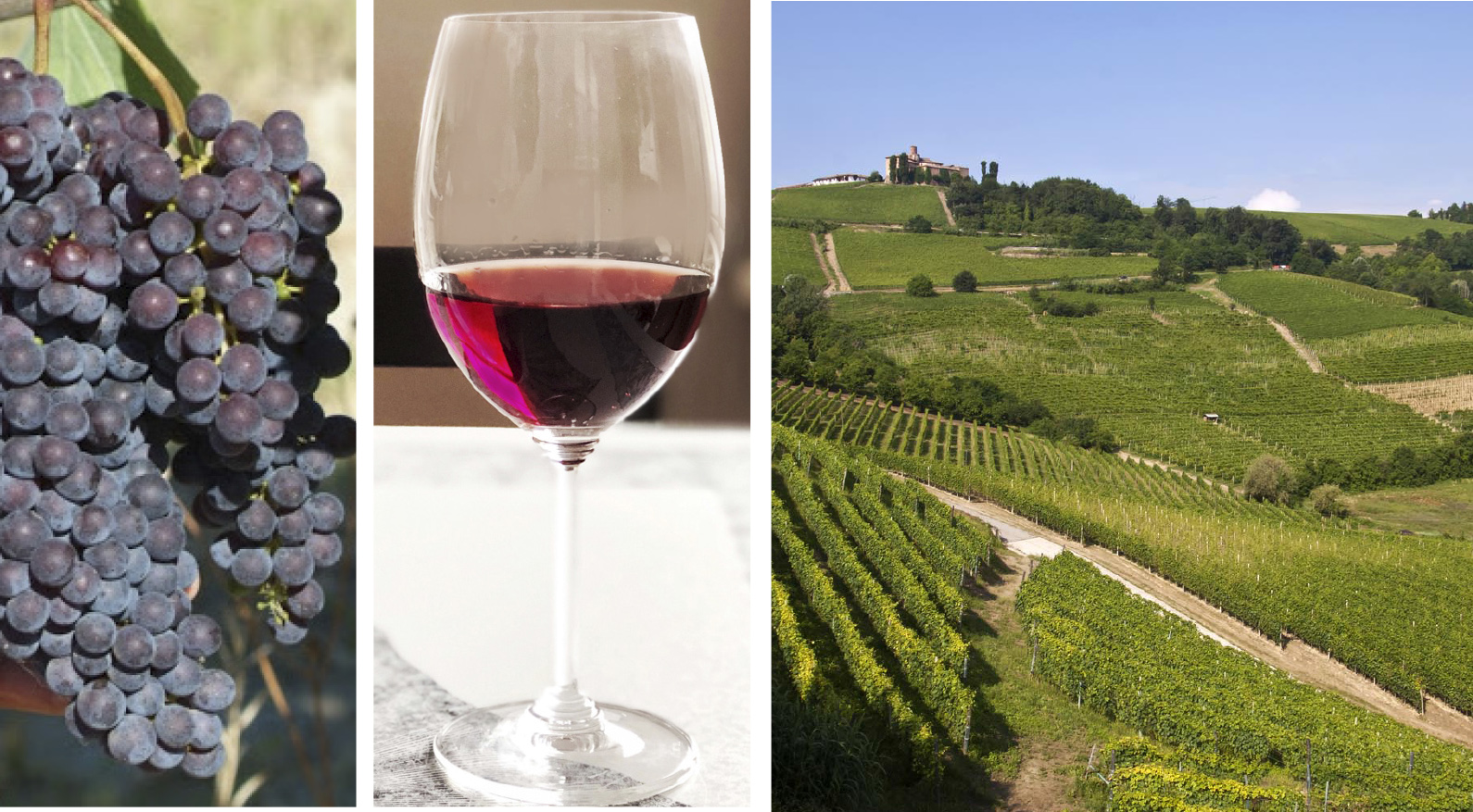 I was smitten. The first time I tasted Grignolino was inside the castle of Costigliole d’Asti in the Piedmont region of Italy. In the glass was this incredibly alluring light ruby-colored wine, perfumed with rose hips, violets, and flavors of crunchy pomegranate, barely ripe berries, and spice. The juice-inducing acidity of the wine made me want more of this freshness and this crispness that had an enjoyable tannic clench. Could it be that I was charmed by Grignolino because I was enjoying it on its home turf, the lovely Monferrato? And within a majestic and historic castle? Sure, but indeed it was tasty and certainly one of the most underrated wines, I thought. Where has Grignolino been all this time?

Historically, Grignolino was abundant and pretty popular among nobility and the wealthy dating back to the 13th century and was one of Piedmont’s most sought-after wine up until the early 1970s, when sweet red wines became increasingly desirable. Thankfully, when  people started to notice how sweet wines have this tendency to pose a pairing problem with the meal, it was time again for the light-bodied, dry wine – which are remarkably food-friendly – to catch the spotlight again. And while we are seeing increased interest internationally for this off-the-beaten-path, high quality wine, we’re actually a few hundred years late to the party.  But, we can make up for this!

First, we should know how to pronounce it and where it got its name from. Grignolino (green-yo-leen-oh) is likely derived from the Piedmontese word grignolè, which refers to grimacing or clenching of the teeth, both of which would result from biting into something highly acidic and/or tannic, such as grape seeds or pips. This is a very fair association due to the fact that Grignolino is bright with acid, accompanied by a tannic bite and carries more pips in each berry than any other cultivar and also, the berries are small.  So one can can imagine that what’s left is very little juice in each berry, more skin surface area, resulting in a tannic wine causing a grimace (or a smile), maybe?  Grignolino. Now, how can we forget this name?

While I explained the name, I have also shared some of the characteristics that make this wine so desirable. At first glance, Grignolino is characterized by hues ranging from deep pink tourmaline to high grade ruby, remarkable tannins, bright acidity and pretty floral aromas and bramble berry flavors. This lighter style offers amazingly balanced wines with energy, undeniable charm, and spunk that are remarkably nuanced with multi-sensorial experiences. And not only are they food-friendly, they are age-worthy, as well.

Grignolinos, like Nebbiolo and Pinot Noir, are excellent interpreters, if you will, of their origin, namely the soils that they are grown in. This provides what I call the ultimate “sip trip” for anyone who wants to dive a little deeper and taste the terroir right from their glass no matter how far away they are from Grignolino’s home. What an opporunity!

Grignolino del Monferrato Casalese is known to produce wines with more heft and richness due to their marly clay and calcarious soils. Looking closer, the soils in this area are light in color –  almost white –  and producers take pride of the highly-adored terre bianche.

Grignolino is quite prevalently holding its own today in Piedmont’s beautiful countryside, despite its more famous neighbors, such as Nebbiolo and Barbera, who have taken the world’s center stage over the years.

But, its popularity is undoubtedly on the rise and adored by a large number of enthusiasts. Though harder to find in the U.S. market,  great places to find Grignolino are at wine bars and restaurants driven by thoughtful sommeliers. Ask for it and discover a wine that is translucent and relatively light in hue, offering firm tannins and bright acidity with aromatics ranging from heirloom roses to African violets to wild roadside berries and cinnamon, white pepper, and citrus zest. Absence of oak is typical with a few exceptions. Production of Grignolino has been well-documented for centuries, making it one of the area’s native legacy grapes. When crafted with passion and finesse, results prove to be delicious and irresistible.

Their aromas, flavors, and soils:

Braida Grignolino d’Asti Limonte DOC
100% Grignolino from a vineyard in the municipality of Rocchetta Tanaro, where the soil is rich in clay and silt (hence the name limo in Italian), Scents and flavors:  rose blossoms, country hay, stone fruit, and small wild berries.

Gaudi Spumante di Grignolino “Margot”  – Fermentation in the bottle (metodo classico) made from Grignolino from the Vignale Monferrato, considered by many to be the grand cru area of the denomination. Roughly 100 meters above sea level on calcarious soils with a small amount of sand offer an effervescence of pink grapefruit, apricot, and orange peel.