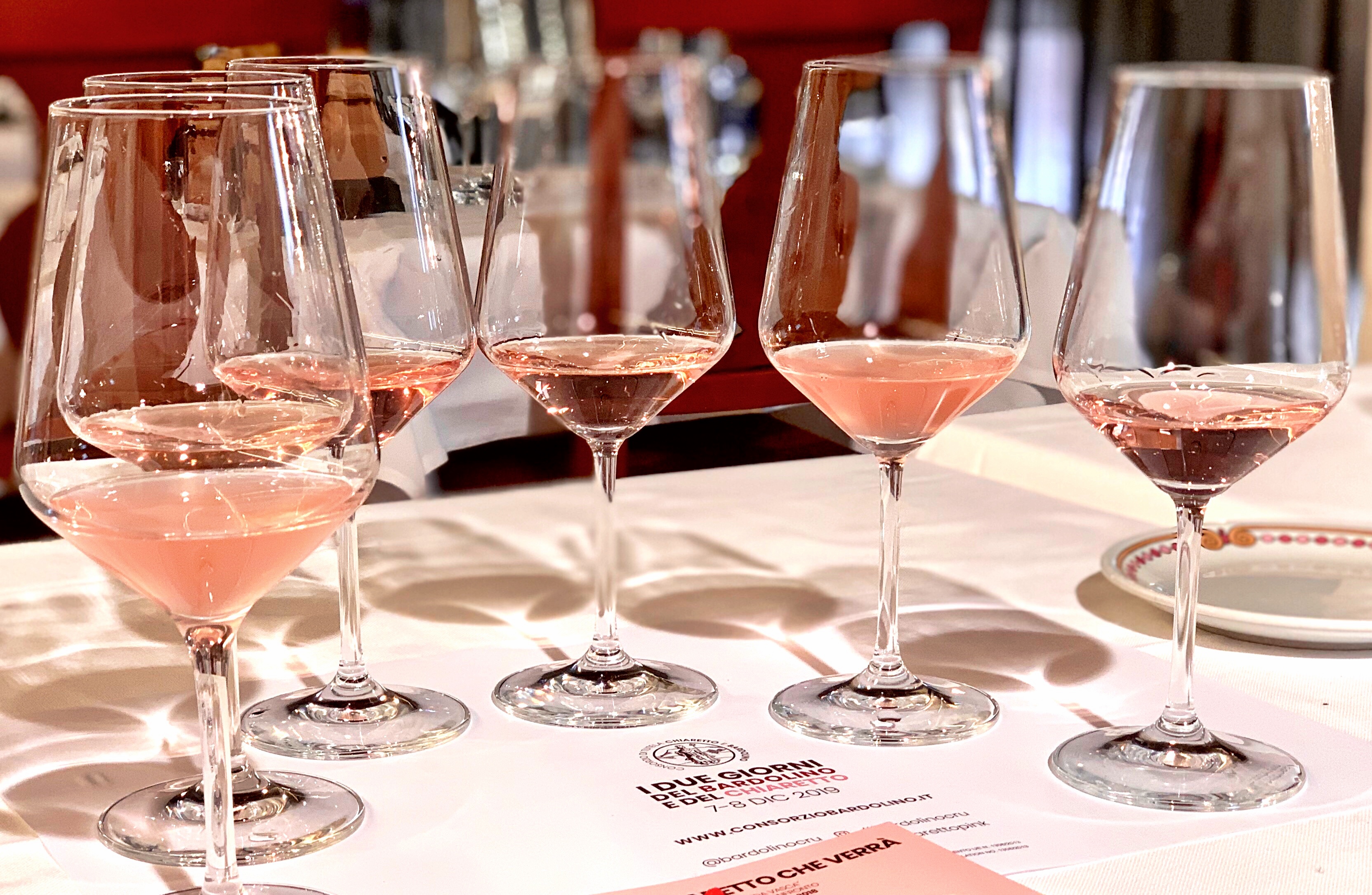 In and around the ladel-shaped Lake Garda, situated halfway between Venice and Milan in Northern Italy, every little town brings discoveries: a cluster of umbrella-shaded tables at the shore’s edge, a restaurant perched high above the lake with a wine cellar which once housed ice during the winter, a vintage lemon arboretum, flower-lined promenades, thermal pools fed by the mountain run-off and vines upon grapevines that produce easy-drinking wines that coincidentally suit the lake life.

Lake Garda is a place where F. Scott’s Fitzgerald’s Jay Gastby would have enjoyed a week-long trip, with a glass of dry Italian pink wine called Chiaretto in one hand, and Daisy Buchanan in another aboard a yacht on a sun-drenched day. Sounds like fiction (and it is), but the wine certainly is not. Romantic, sensual and casual, Chiaretto is genuine, yet it harnesses magic, adventure, and story-telling.

I was in Garda this past year. Once in the spring and again in the winter.  While during the warmer months, the blue water shimmers in the sunshine, as tourists scour the shores, winter is quieter and more of a place for reflection on a single dock that stretches into the lake. The sun is lower, colors are more luminous, golden even. Yet, the light pink, refreshing Bardolino di Chiaretto remains in style throughout the seasons.

Hailing from the production zones of Bardolino, Lugana, Custoza and surrounding towns, Chiaretto is primarily made of indigenous varieties Corvina and Rondinella  – important varieties in the blend of world-famous wines Amarone and Valpolicella. Also in the same neighborhood around the lake, the grapes make the quaffable red Bardolino.

Chiaretto’s name derives from the Italian word, “chiaro” which means “light in color.” And while Chiaretto is still being discovered, it’s worth mentioning that it has been around a while, appearing first in an ancient document dating back to 1806.

Then, in 1896 a lawyer named Pompeo Molmenti planted vineyards along the shores of Lake Garda and vinified his wine using the rosé winemaking techniques, a skill he had acquired in France.  By 1968, the dry Italian rosé took hold and eventually the region earned one of Italy’s first DOC (Denominazione di Origine Controllata) designations.

What makes Chiaretto so desirable is its personality: easy-drinking, not overly serious, lively, and vivacious. Chiaretto usually exhibits a pale pink color and is often suggestive of citrus notes, peaches, wild berries, occasional floral, and markedly notable salty minerality. What adds to the wine’s charm is the stony, morainic soils in which the vines are grown.  Lake Garda and the surrounding hills were cut by receding glaciers after the ice age(s), resulting in soils that are characterized by an extreme variability.

The climate is Mediterranean on the 45th parallel north, which is as high as Mediterranean can afford to go. Cherries, lemons, olives, even bamboo and banana can be found around these parts. Yet it’s clearly mountainous because the region meets the foot of the Alps. What this does to the area is magical. The lake tempers the potentially inescapable hot summer and buffers the harsh winters, while the interplay of mountains and valleys provide predictable thermal winds. The Pelér blows from the north to south in the mornings and the Ora from the south in the afternoon. Sailors often claim, “Every shore and place on the lake has its own wind.”

The Garda area has a long history – frozen for much of the time –  but today, it’s fresh, alive and quenching the thirsty with passionate producers driving it forward.

Villa Calicantus
As I picked up a handful of white, tumbled rocks in the vineyard, Calicantus owner and winemaker Daniele Domenico Delaini said, “It’s limestone and calcarious soil. Here, there is more minerality.” He looked out toward the lake in the distance and talked about the terroir, his grapes and his biodynamic practices. “We believe in the potential of this territory.”

His family had been producing wine since 1860. Then in the 1980s, the winery closed. Delaini was a banker in Paris in 2011 when he started to work on revitalizing Villa Calicantus to what it has become today.  Growing the production from 3,000 bottles to now 30,00-40,000, he also became the first biodynamic winery in the area.

“Sorry, but there is no selected yeast in this house.”

The winery is named after the flowering Calicantus flower.  His philosophy: “If the vines are balanced and grapes are balanced, then the wines are balanced.”  Chiar’Otto is a blend of Corvina, Rondinella, Molinara, and Sangiovese from 52 year old vines, fermented and aged in barrels for five to six months.

“One thing I learned from one year in France is that you have to be proud of what you’re doing, but it’s super important if you don’t have money, you have to do one thing very well.  Also, I understood that even though you are small, you can dream big.”

Gentili
Another passionate producer in the area is Enrico Gentili, who’s father, Carlo, started the winery 40 years ago. Enrico has been improving the family project by farming the grapes with respect to the land, implementing practices such as green manure for fertilization, hand-picking fruit, and zero herbicide use. A few stands-outs include the Chiaretto 2017 Bardolino DOC, made with Corvina, Molinara, Rondinella, on the lees for five months, and the Chiaretto Spumante “Enrico Gentili” Metodo Classico 2017, made from grapes from an older vineyard with 24 months sur lie. Super delicious, fresh, and effervescent and yes, metodo classico.

Located in Lugana, which is situated at the southern shore of the lake, Fabio Zenato and his brother Paolo are third generation vine nursery owners and winemakers who produce a Bardolini Chiaretto Spumante Brut called Cépage Rosé Chiaretto Brut, as well as the classic Bardolino Chiaretto, made with Corvina, Rondinella, and Molinara. The juice sits with the skins for half of the day. The wine is characterized by yellow peaches, strawberries and violets and balanced by a mouthfeel of rich softness. Le Morette also showcases its home terroir with their signature Lugana  (Lugana Mandolara, Lugana Benedictus and Lugana DOC) – all possessing vibrant longevity, while flexing its selections of Turbiana grapes with intense fruity sensations and “sapidity” that is particular to the clay soils in Lugana.

Brothers Luciano and Franco Piona virtually single-handedly created the Custoza appellation in the 1970s. Their winery is situated on the southeast border of the Garda amphiteathre in Cavalchina. Their philosophy: Making wine of quality is an art that requires patience, intelligence, and love.

Grapes are manually-harvested with several passes through the season to ensure the best bunches for their own winemaking; the remaining fruit is sold on the wholesale market.  Among the wines are the mouthwatering and delicious Custoza whites composed of Garganega, Fernanda, Trebbiano and Trebbianelo,  Bardolino DOC and Bardolino Chiaretto. The 2018 Bardolino Chiaretto is bright and linear with citrus pith, early red berries, and salinity. The 2017 shows more caramel tones and softer of the nose with stone fruit, body, and approachable roundness.

Roberta Bricolo was an attorney prior to returning to her roots in Custoza to work alongside her father Robert. Today, she says, “I put my attention to autoctono grapes.” Her vines sit on a glacial moraine near the village of Custoza and the wines that come from it are fresh, highly drinkable with signature minerality. Gorgo’s organic offerings include the Chiaretto and Bardolino DOC and the enticing, fruity and persistent structure of San Micheline Custoza DOC, a Garganega, Cortese and Riesling blend.

Winemaker and owner Matilde Poggi  says, “It’s not my job to follow the trend, but to make wine I really like.” Her family’s winery has been around since the 1800s and name, Le Fraghe, means the strawberries. Ironically, when she converted her vineyard to organic, she noticed a proliferation of wild strawberries in her vineyard. Poggi’s Chiaretto Rodon (80% Corvina/20% Rondenella) is produced in the saignée method and shows flavors and aromas of strawberry, grapefruit, almond, mineral, and saline.

Owned by Franco Cristoforetti, the Villa Cordevigo estate is an enclave of natural beauty near Lake Garda. Based on the concept of sustainability, the estate consists of 100 hectares, 23 of which are farmed organically. Look for the Villa Cordevigo bottlings ranging from Biano and Chiaretto, to Bardolino and the rare Oseleta varietal bottling.

I’d like to express my deep appreciation to the Consorzio for sponsoring my trip to Lake Garda and the Veneto region and to the team at Studio Cru for flawlessly coordinating all the visits.