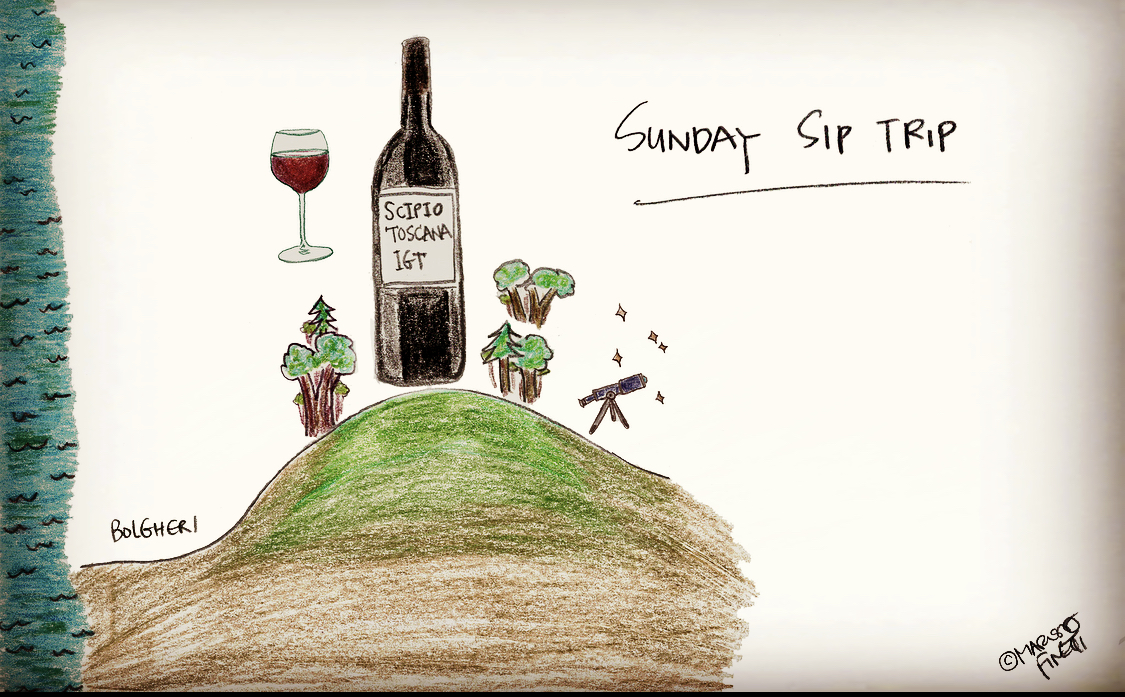 Nearby is the famous Bolgheri appellation – the area known mainly for deeply colored age-worthy wines usually based on the Bordeaux grape varieties. Up until the 1970s, this area had a not-so-illustrious reputation for wine production that it has today. It was regarded as something of a swampy zone producing fairly nondescript white wines and rosés. The land was better suited to other farming; the prime Tuscan vineyards were further up in the hills. Then Bolgheri’s rise to fame and cult status came with the arrival of Sassicaia. Made at Tenuta San Guido estate of the Marchese Mario Incisa della Rocchetta, the wine beat a number of top Bordeaux wines, and rapidly the area became a world-class producing wine region that challenged convention and adopted international grapes. The sunny, dry, and breezy climate of Bolgheri and the stony soils with clay patches have attracted more producers, mostly focusing on red Bordeaux varieties on these now famous soils. Some chose to go uphill.

The Ratti family purchased more than 170 acres of isolated land near the Tuscan village of Monteverdi Marittimo between Bolgheri and Castagneto Carducci. In 2000, the family began planting the first vineyards on the property. Today there are 17 acres of high-density vineyards planted to Cabernet Sauvignon, Cabernet Franc, Merlot, and Malbec. The family chose the name Tenuta Sette Cieli or “the estate of seven skies” for their winery because the property sits atop a hill at 1,300 feet with incredible views in every direction.

From this elevation, Sette Cieli is in a unique position in many ways: Altitude provides cooler temps and promotes acidity. A rocky mix of black slate and granite, combined with the estate’s clay soils, distinguishes them from the sandier, loamy soils below. The surrounding forest isolates them from other growers and ensures a clean and organic environment. The nearby sea also provides year-round breezes that keep the humidity at bay and cools the fruit providing freshness in the glass. According to winemaker Elena Pozzolini, their philosophy is to not force anything; they don’t work with any recipe. They embrace the elements they have and pay special attention to their vineyards.

Scipio is named after the Roman military general and statesman who defeated Hannibal at the final battle of the Second Punic War in 202 BC.

It is impressive, serious, and punchy. Made of 100% estate-grown Cabernet Franc, Scipio is made only in the best vintages. 2016 was a good year. Not as hot as 2015; springtime brought some rain. Altitude and continuous breezes helped during the summer months. Beautiful in the glass, with a deep, luxurious garnet hue, Scipio showcases a more commanding side of Cabernet Franc. On the nose, a potpourri of dried petals, dark berries, plums, tobacco, herbs, spices steeped in black tea with a touch of roasted green bell pepper. On the palate, a dark compote of blackberries and black currant, sweet tobacco, leather, and dark cherries mingling and revealing Scipio’s character – complex, charismatic, grainy from tannins, tense with acidity, elegant, and balanced. This wine is made to last. Each year, it will continue to unfurl its radiance and intensity.

Thank you Studio for organizing the delivery of media sample(s) and virtual call with winemaker Elena Pozzolini and owner Ambrogio Cremona Ratti.