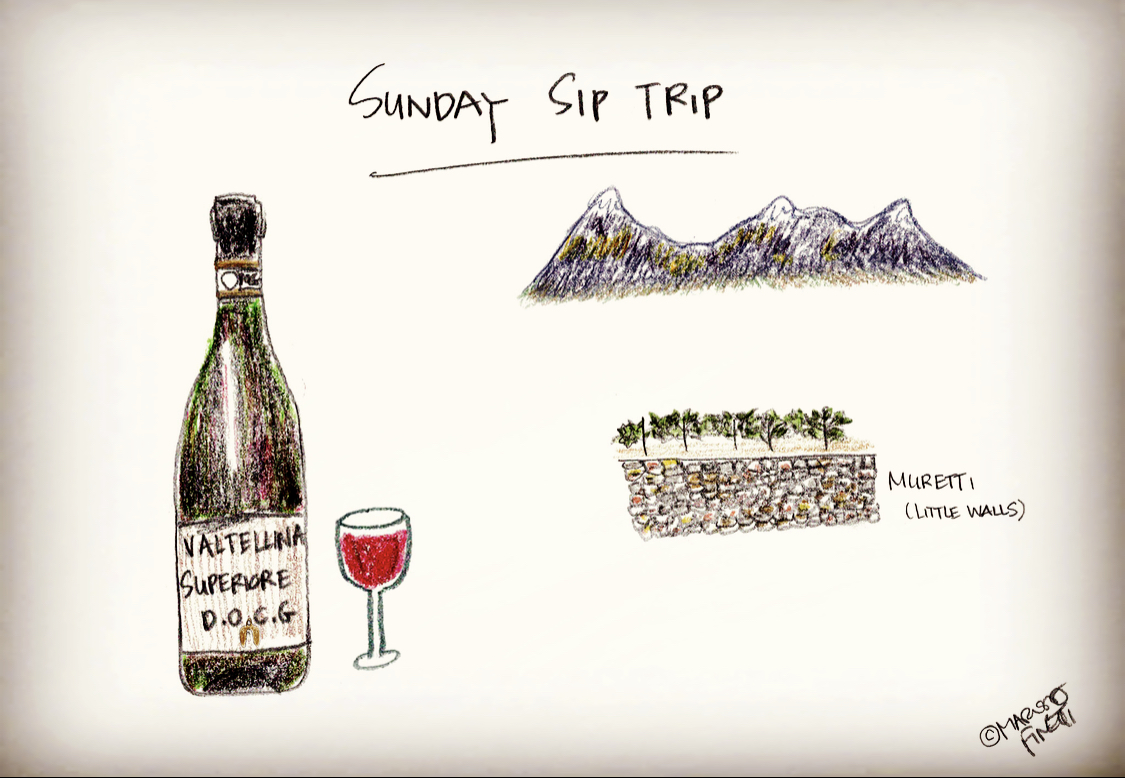 Located in Italy’s northernmost part of the Lombardy region near the Swiss border, Valtellina is known for its extreme vineyards and is the home of Chiavennasca, a local Nebbiolo biotype. The only valley in Italy to run east to west, Valtellina was formed during the last ice age by glaciers that carved out the granite mountains. The Adda River flows from the Swiss Alps toward Lake Como, and along this path, there are more than 25 miles of interconnected vineyards that are perched on impossibly steep slopes (as high as 70%) at elevations up to 770 meters above sea level.

The vineyards, often less than a half-acre in size, are planted on terraces held together by dry, stone retaining walls called muretti, some of which are over 1,000 years old. If placed end to end, these stone terraces would stretch a distance of over 1,500 miles. In 2018, UNESCO declared the region a World Heritage Site.

Valtellina boasts wines of altitude and attitude. Not only is farming 750 meters above sea level an ambitious feat, working these steep terraces takes great determination, dedication, and time. It takes roughly ten times longer to farm these lands (up to fifteen hundred working hours per hectare) than what is required for flatland, machine-workable vineyards.

Given the steep nature of Valtellina’s mountain slopes, terraces are necessary to plant the vineyards and provide a surface for people to harvest the grapes. They also serve to prevent soil erosion and landslides. The walls also have a thermal function. The sun warms the large rocks and releases heat during the night, but it is never a stifling heat because the Como Lake and the Alps, and the Adda river create a thermal gradient. On average, the temperature inside these all vineyards are 5-degree Celsius higher than in the area’s flat vineyards. And for this reason, frost is a rare occurrence.

At the moment, there are a small group of producers that are paving the way for a wider recognition of this historic region. One of them is Tenuta Scerscé. Cristina Scarpellini, founded the winery in 2008. What started as a hobby when she leased one acre of vineyard land quickly became a full-time realization of building a winery. She partnered with Attilio Pagli, one of Italy’s most respected winemakers, and together they oversee all aspects of winemaking.

Tenuta Scerscé produces wines from 7 hectares (17.5 acres) of sustainably farmed vineyards planted to Chiavennasca, which is known for producing elegant, distinctive wines full of alpine personality. Due to the steep slopes of the vineyards, the fruit must be hand-managed and harvested into small boxes called portini.

Generally, Nebbiolo-based wines from Valtellina are a touch lighter and less tannic than their Piemontese counterparts, primarily due to the higher elevation and cooler temperatures. The stony soils contribute to the delicate character. What the wines lack in power is made up by finesse and elegance.

The vineyards for Essenza Valtellina Superiore DOCG are fragmented throughout Teglio and Villa di Tirano, planted on rock terraces between 450-650 meters above sea level. Often less than one acre in size, the plants are positioned in the traditional “rittochino” method, which connect each vineyard through stone stairs. Essenza is 100% Chiavennasca fermented in stainless steel and aged in 50 HL oak casks for 24 months.

A beauty in the glass, Essenza is ruby leading to garnet with the classic orange rim one would find in this grape. On the nose, ripe morello cherry, strawberries, tri-blend peppercorns, dried roasting meat herbs, laurel bay, licorice, and peat moss lead to flavors of green peppercorns, cherries, strawberries (with a few of its leaves), crunchy cranberries, pomegranate, mint, minerality of chalkboard slate and finishes with a spray of salinity.

Chiavennasca is the Nebbiolo grape – the same grape that produces the famed Barolo from the neighboring region of Piedmont. So if Barolo is king (like many say), this is certainly one of its knights. It is medium-bodied, agile and lean, playful and ever-so-slightly plush and fresh. He’s not a hero, but he sings for his fellow knights before the battle. He is good with a sword but equally good with the lute. Because he is a knight from a great lineage, he doesn’t quit. The finish is long and graceful.