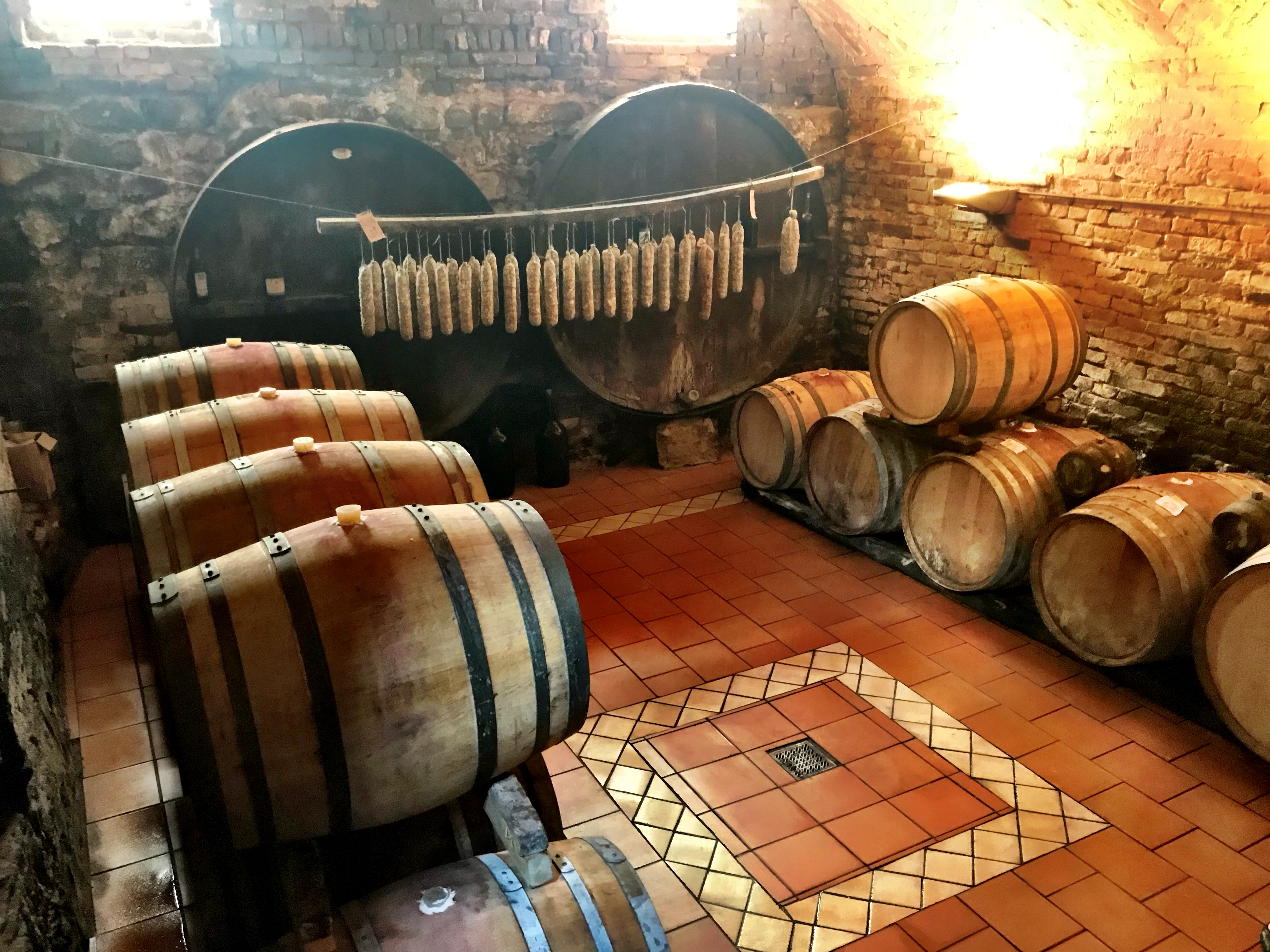 It was raining off and on as I walked along the ramparts behind the original castle of Castagnole Monferrato until I arrived at 62, the address of La Miraja and Eugenio Gatti, a Ruchè producer. When I first had Ruchè a few years ago I was immediately captivated by its alluring characteristics. It happened to be Eugenio’s bottling and since then I’ve tasted Ruchè from other passionate producers, which have only fortified my love for this wine.  Ruchè’s origins are in this extraordinary and picturesque area called the Monferrato surrounding the towns of Asti and Alessandria in Piedmont region of Italy. Ruchè is just one of many beautiful wines that I adore from this area, which has ultimately drawn me here.

The buzzer made the sound of an electromechanical school bell as it traveled deep inside the walls of this 11th century castle where Eugenio and his family live. Industrial and cold, the echoes led to questionable thoughts of the unknown. 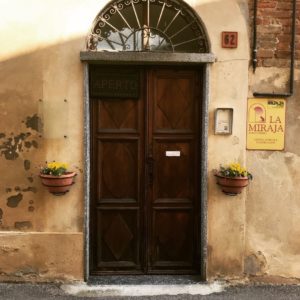 But only for just a moment until Liubou, Eugenio’s wife, greeted me at their door. Gracious in every way, she welcomed me into their home and walked me through the narrow halls to a small dining room. Their residence, which is also an agriturismo and restaurant was well-appointed, colorful, and comfortable. Mustard yellow rooms furnished with dark woods, exquisite paintings on the ceilings remained to be original works of art, floor runners hushed the creaking wood beneath them.  And along the walls, familiar paintings that inspired the artwork for La Miraja’s original labels. 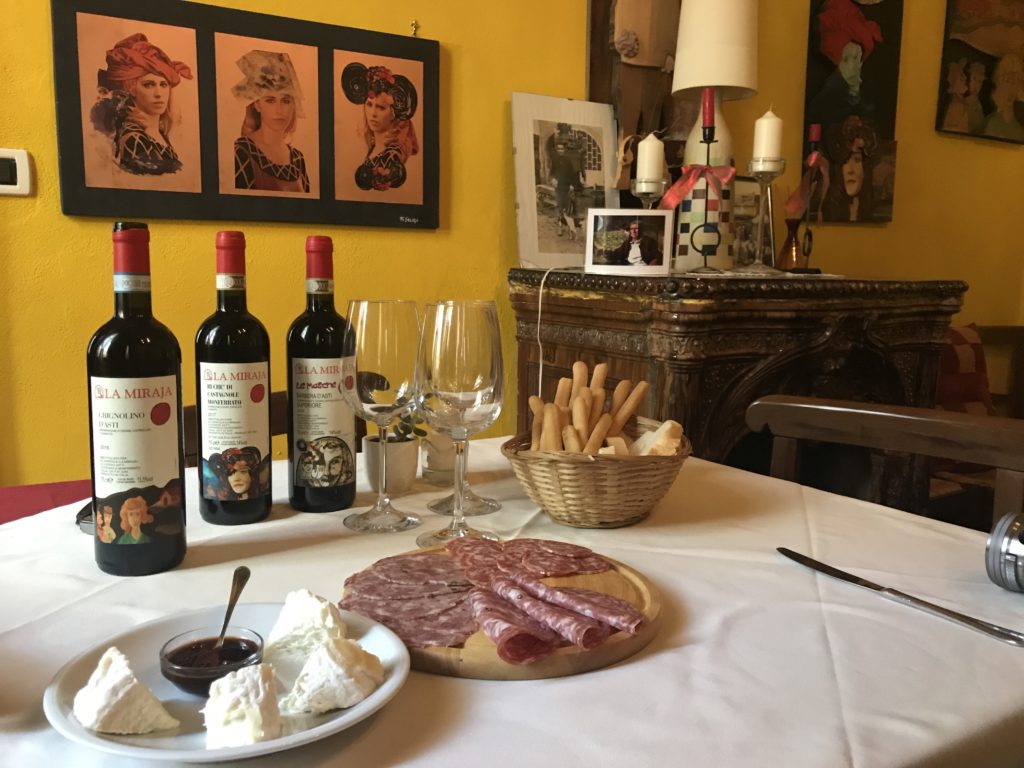 Eugenio Gatti finally arrives from a trip to get fresh-baked bread.  He enters with their three-year-old daughter who holds a bag of candy.  She’s grinning from ear to ear.

Through the sun-lit garden located in the inner chamber of this castle wall, we walk to the back to take a tour of his armory-turned-cellar. Where once it was a place of swords and daggers, now are stacks of barrels where he ages Barbera d’Asti, Grignolino, and his fabled Ruchè. A string of homemade salami ages alongside the wine.  A seventh-generation viticulturist, Eugenio personally tends to the oldest vineyard of Ruchè in Castagnole Monferrato, which is one of two main communes where Ruchè is believed to originate from. It also holds the DOCG since 2010. The other notable commune is Scurzolengo. Ruche from Castagnole Monferrato produces richer, fleshier, juicer wines as a result of the clay in the soil, while Scurzolengo, which is located higher in altitude with calcareous/limestone soil produces livelier Ruchè with slightly more acidity. A total of seven communes produce Ruchè. Production is very small with approximately 125 hectares planted from 23 producers. 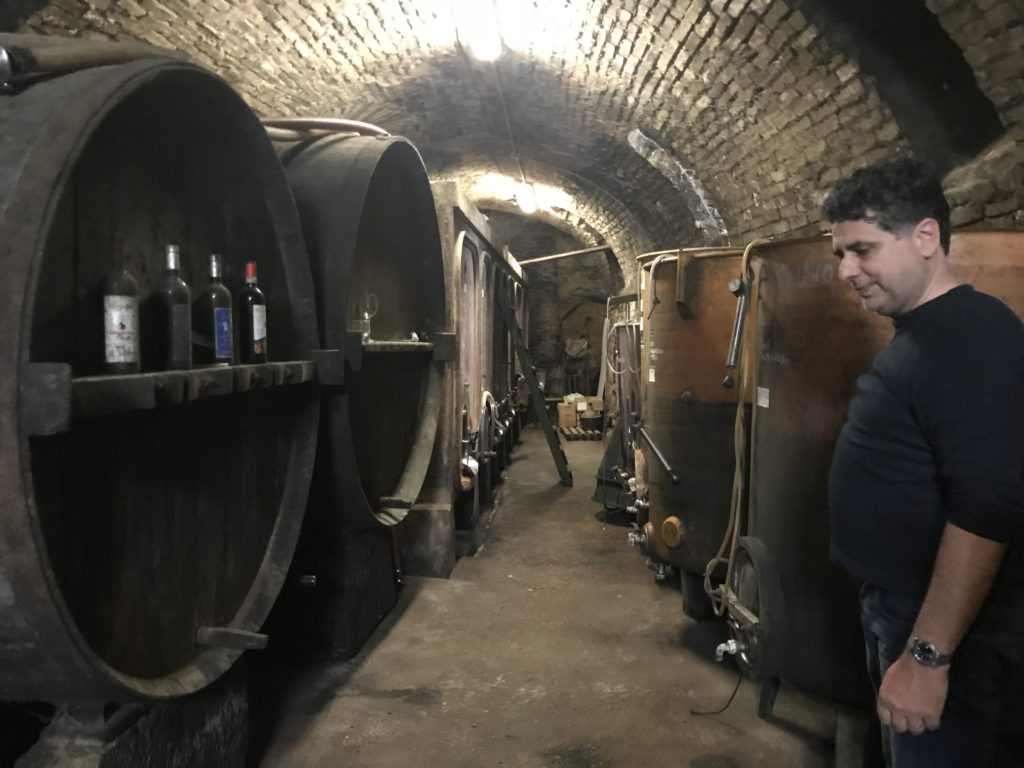 Wines made from the Ruchè grape has a beguiling aromatic promise of delicate, fresh blossoms of violets, geranium, lavender — sometimes expressing white fruits of quince and fig — while capturing cinnamon, spice and black pepper.

This distinctive beauty harnesses wildly redolent red berry characters and delightfully fits the demand for a light- to medium-bodied red wine that can be served slightly chilled.  Definitely fit for conversation.

Ruchè is a success story of this region. It is said to have been saved by a priest who cultivated vines on a small plot of land in the town of Castagnole Monferrato. 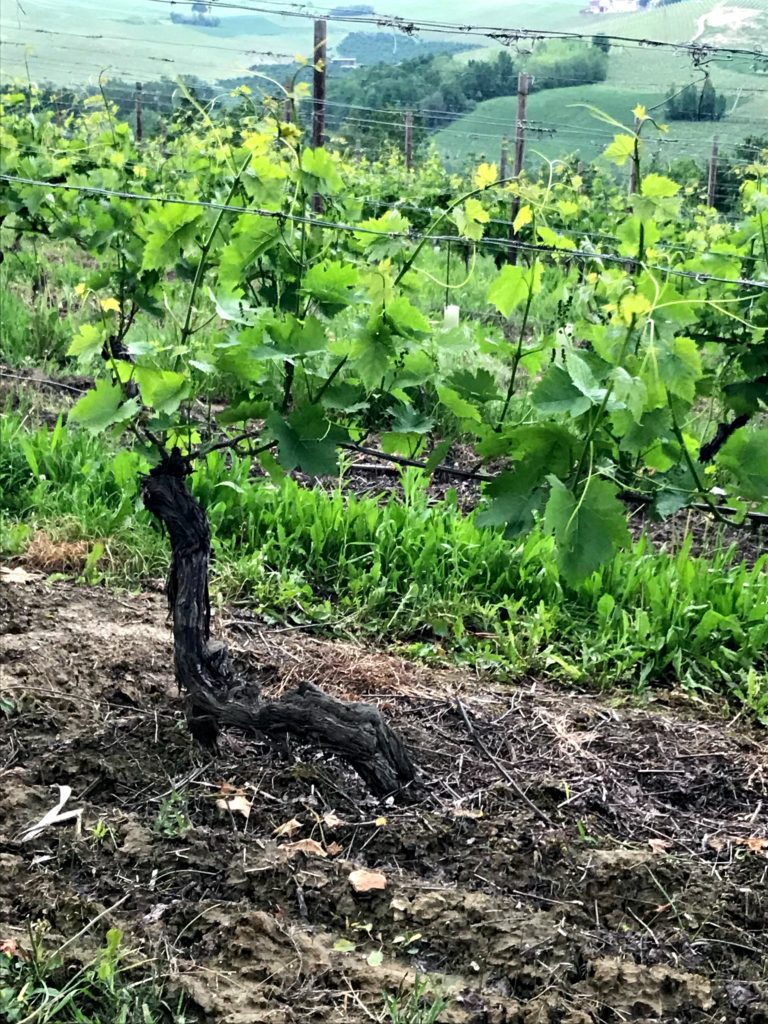 Rev. Don Giacomo Cauda wanted to make a wine that celebrated its local origin and, at the same time, help his small, economically challenged village.

He was known for quickly changing out of his liturgical vestments immediately following mass to climb onto a tractor to work the vineyards. He embarked on a mission to modernize the church’s vineyards and winemaking techniques to create a wine made with 100 percent Ruchè grapes grown in Monferrato.

“Ruchè di Castagnole Monferrato is a rare, aromatic, dry red wine not unlike a Black Muscat that lives in a very finite area of the Monferrato area of Piedmont,” said Ian D’Agata, award winning author of Native Wine Grapes of Italy.

“This pretty, but still relatively little-known grape gives beautiful wines that are amazingly perfumed and match well with a number of foods, and especially so with ethnic cuisines involving spices and soy sauce.”

On that day I enjoyed Ruchè with the traditional regional dishes prepared by Liubou and Eugenio’s mother and couldn’t help but think about the sign at the entrance of the commune that reads,” If someone in Castagnole Monferrato offers you Ruchè, it’s because they like you.” 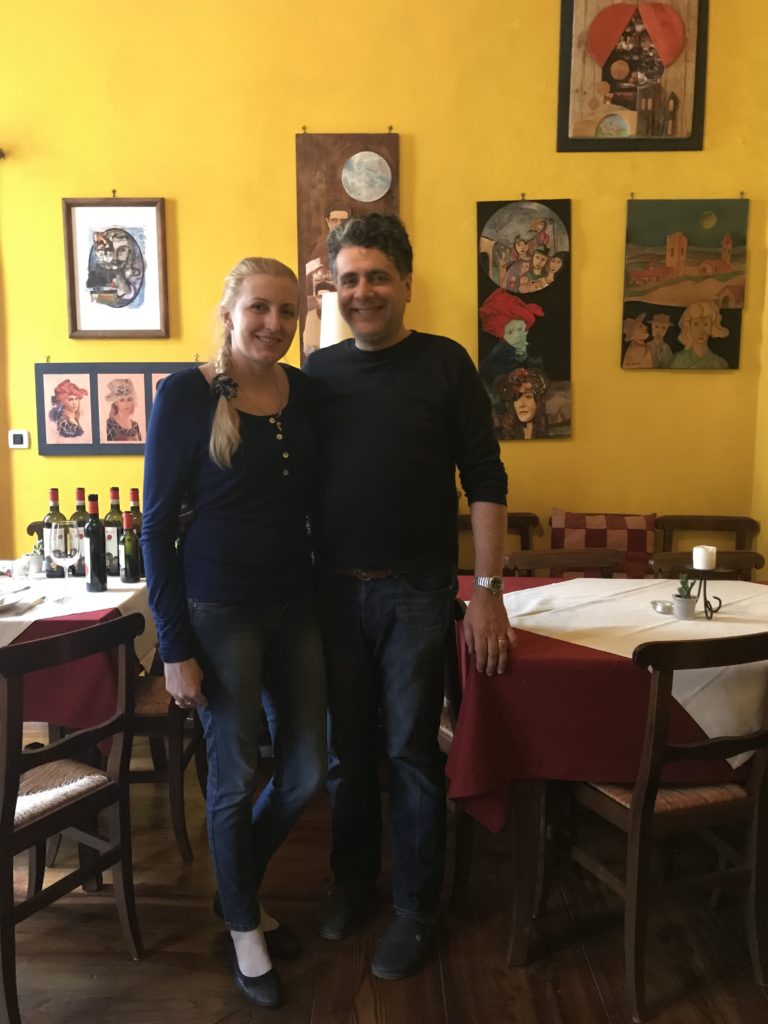