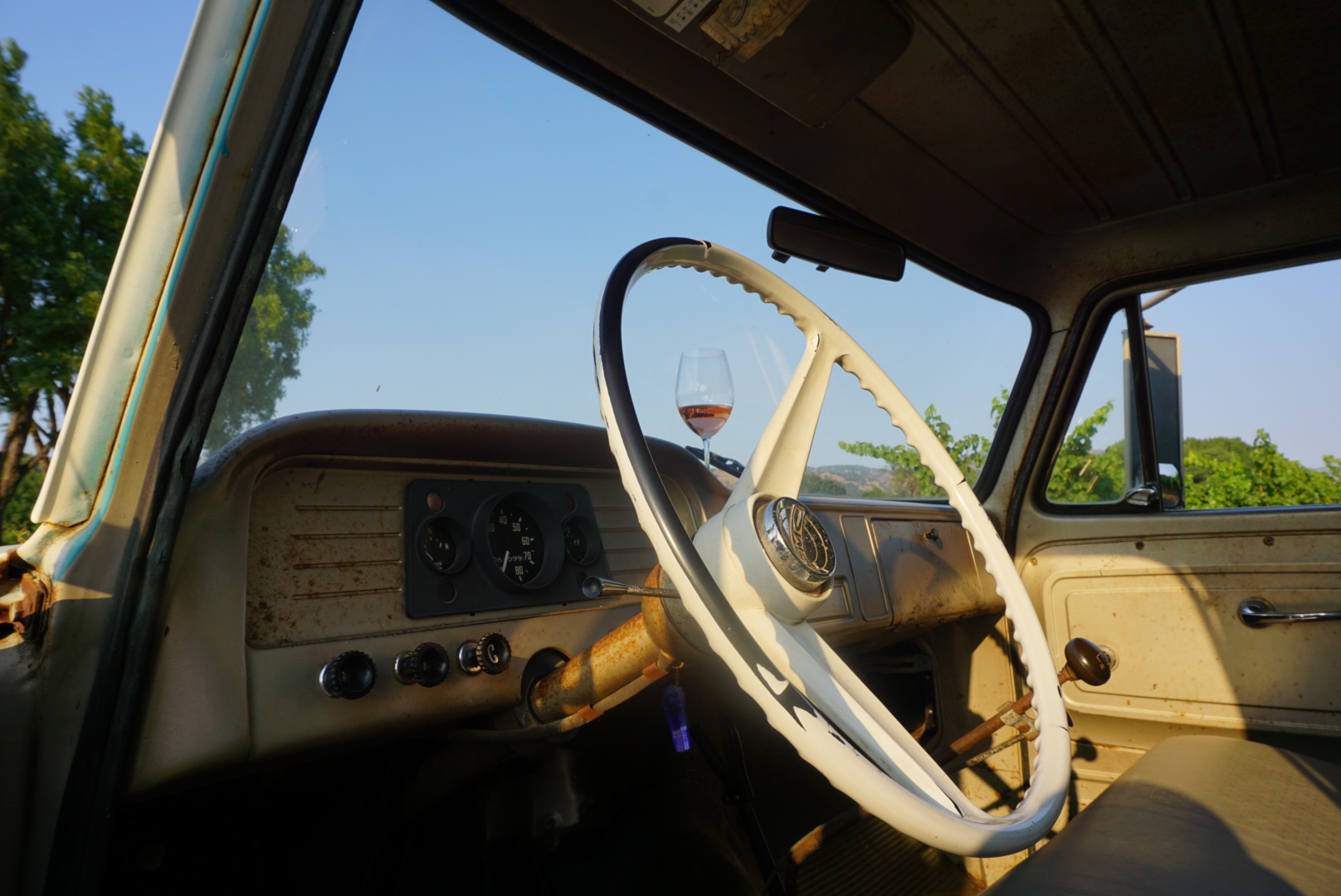 On that warm August afternoon, Tom Gamble greeted us with a glass of rosé, helped us onto his flatbed trailer as we took an open-top tour through his land. This was the first thing we would do upon arriving at Gamble Family Vineyards to appreciate where his love for this place comes from. Only then would we discover why the third generation rancher would make wine at all.

Along the way, the vintage GMC crawls to a stop for a friendly, idle chat between Gamble and a vineyard worker. Tending to hundreds of acres takes many reliable hands – people he trusts, those who care about the land as much as he does. From the flatbed, the view is expansive and serene. The eastern sky illuminated gradient hues of gold to purple as the sun was beginning to set behind us. It’s picture-perfect Oakville in Napa Valley. Soon, we reach a knoll where his childhood home still sits, surrounded by half an acre of vines. A comfortable and safe place – clearly the heart of Tom Gamble’s world.

Gamble is all about his family, who imprinted a deep and abiding affinity for the land from which came not only their livelihood, but a life full of purpose and meaning. The Napa County farmer had been influenced all his life by his forebearers’ lives in agriculture.

Napa County’s first agricultural industry was cattle, grown to support the nearby Sonoma Mission. Later, cattle were replaced with dairies, horses, chickens, wheat, prune orchards, and vineyards. In 1916, his grandfather, Launcelot Gamble, first began cattle ranching and farming a variety of crops. Over the years, he passed his passion and trade onto his sons, Launce and George (Gamble’s father).

In Napa County, land devoted to vineyards rose from about 15,000 acres in the mid-1930s to almost 50,000 acres in 2007. It happened gradually at first, then picking up pace in the 1970s and 1980s, during which time Gamble’s mother, Mary Ann McGuire, was active in establishing the Napa Valley Agricultural Preserve. The ordinance protected vineyards from commercial development and ensure that the land is used strictly for agricultural purposes. Gamble credits his mother’s efforts as one of the main reasons he can make a living as a farmer and grape grower today. Given such a legacy, one would not continue farming for dispassionate reasons alone.  After all, he says, “there are easier ways to make a living.”

Tom Gamble planted his first vineyards in 1981, and after two decades of growing and selling his own grapes, the natural thing to do was to make wine.

“And thus, taking the next step and putting my name on a bottle of wine does not come lightly,” says Gamble.

When he founded Gamble Family Vineyards, it was with the goal of celebrating the distinct Napa Valley terroir he had come to know and love when he acquired the land in Oakville property where he would eventually begin building his family winery in 2012. Gamble owns approximately 175 acres of prime estate vineyards from several of Napa Valley’s most respected AVAs, including Oakville, Rutherford, Yountville, and Mt. Veeder.

His mission is to carry on the heritage of quality farming that his ancestors sowed when they came to Napa as farmers and ranchers in the early 1900s. Today he carries on his family’s legacy with efforts to regenerate the land for Napa Valley to remain viable and productive for future generations. Considered a leader in sustainability in the Napa Valley, he has helped establish the Fish Friendly Farming and Napa Green programs, which protect much of Napa’s ecosystem, including water quality in surrounding rivers and fish and wildlife habitats.

I had the opportunity to taste a few more…

During Tom’s travels to France he developed an affection for Sauvignon Blanc. The “love” for this grape now lies in a block of vines at the center of our Gamble Vineyard in Yountville – the Heart Block.

Tom planted 12 vineyard acres in 1998 to clones representing two regions of France: Sauvignon Musque from the Loire Valley, and a cutting from Bordeaux, referred to as the Preston clone.

Gamble’s Sauvignon Blanc grows on loamy clay soils at the valley floor that draw in and keep fog a little longer into the morning, and benefit from afternoon shade from the nearby hills. Bunches are harvested from a single cluster per vine shoot for pristine quality. 620 cases are produced.

Notes: Inviting  aromas and flavors of  candied citrus zest, white flowers and fruits of the tropics, Heart Block is generous and complex, showcasing  well-balanced acidity, and a long-lasting memorable finish.

This 2016 Paramount is a Bordeaux blend of Cabernet Sauvignon from Oakville, Merlot from the terraces of Mt. Veeder, Cabernet Franc from their low-yielding St. Helena vineyard site, and Petit Verdot from the slopes of Mt. St Helena.

In the cellar, winemaker Jim Close, ages the four Bordeaux varieties that define Paramount. Each variety is separately fermented, pressed and transferred to French oak barrels for malolactic fermentation. After 20-month of aging, the separate lots become one to become Paramount. 1,210 cases are produced. The 2016 is  31% Cabernet Sauvignon, 31% Cabernet Franc, 30% Merlot, 8% Petit Verdot.

The tasting and outdoor dinner on that chilly, dark night ended late. The vineyards were dark, the wind was persistent. But, Gamble knew that a full moon would soon rise and so he insisted that we stay a little while longer. Moments later, it peaked out above the Vaca mountain range, eventually flooding Gamble’s land … and his heart once again.