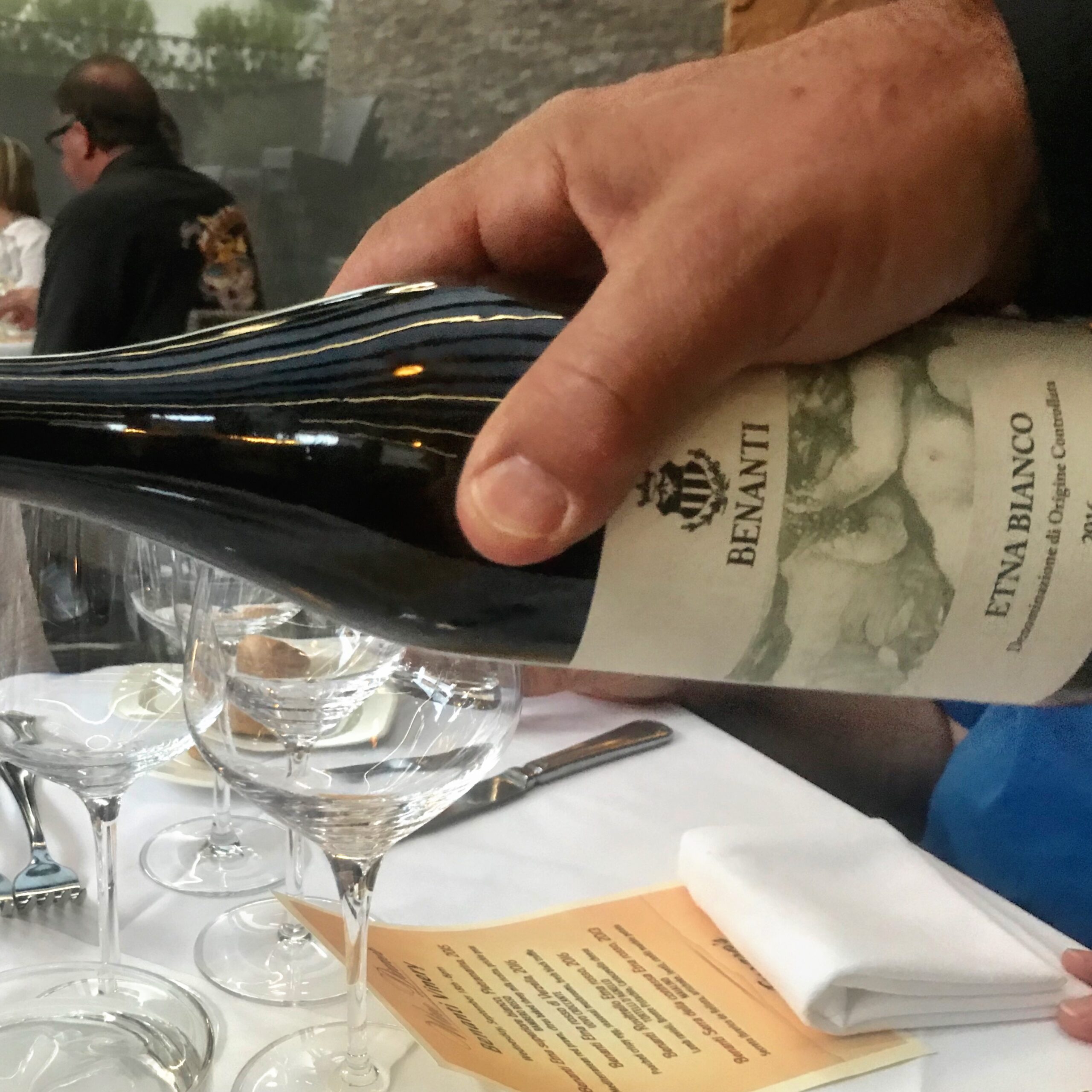 Etna’s greatest great winemakers are fierce and passionate, working under Mother’s Nature’s unapologetic direction season after season, they remain steady ambassadors of their land. The winemakers of the Etna region of Sicily are a remarkably different breed. Resilient and courageous, they risk many of the climatic challenges, from scorching hot summers to untimely rain and hail, plus a decidedly active volcano – all in the pursuit of making some of the greatest wines in the world.

“The eruptions are frequent. I don’t know about today, but it was erupting yesterday,” says Antonio Benanti, owner of the long-established Benanti winery and president of the Etna DOC consortium. Over dinner at Ferraro’s Italian Restaurant & Wine Bar, video on his phone showed ash and pumice raining down from the sky after a recent eruption of Mount Etna. “I was filming the smoke cooking out of Etna when I was halfway between Milo and Zaffera on the east slope of the volcano.” But, Benanti doesn’t dwell on living in Etna’s shadow. He embraces it.

“To people here, the volcano is more than ‘just’ a mountain,” says Ian D’Agata, one of Italy’s most well-known authorities of Italian wines, grapes, and terroir and author of his latest book, “Italy’s Native Wine Grape Terroirs.”  “But rather a living entity, a companion with which one lives through both good and bad times.”

The brooding cone is a particularly prominent presence that dominates the eastern portion of the island. Etna lies in a complex geodynamic environment hardly comparable to any other region on Earth. It has four active craters on the summit. Its vines are among the highest in the world. The slopes are larded with gnarly remains of old lava flows from the 1600s, fissures from incessant historical earthquakes, and surfaced magma from the famous 1911 eruption. Etna’s summit constantly emits visible whiffs of sulfurous smoke.

All the fruit is hand-picked, as the topography prevents mechanical harvests. This intense viticulture – combined with diverse soils and microclimates, variable temperatures ranging from cool alpine at higher elevations, to warmer climes below, a huge day-to-night temprate range, an abundance of distinctive aspects and elevations, harmonious with the land’s biodiversity –  make for one of the most intense expressions of terroir anywhere in the world.

Notable is also the fact that a few producers such as Benanti,  are working with pre-phylloxera vines – bush trained vines known as alberello (little tree) that are ungrafted (grafted vines are a norm in most countries) making the wines even more distinctive, consequently drawing interest by sommeliers, wine critics and connoisseurs alike.

The Etna DOC resembles a backwards “C” shaped area encompassing vineyards on the northern, eastern and southern slopes of Mount Etna. The mountain reaches approximately 10,900 feet (3,326 meters) above sea level but most of the plantable areas rise up to 3,500 feet (1066 meters).

“It’s almost difficult to have a bad vintage in Etna, given the abundant sunlight, the elevation, drainage, and ventilation,” says Benanti. “Eighty percent, including ourselves, is organic.  It’s a very healthy region.”
What comes out of Etna are very fine, elegant wines that are also easy-to-drink food-friendly.  And to appreciate this wine region – sans the opportunity to actually go there –  is to enjoy a winemaker’s dinner that features them.

On Ferraro’s outdoor patio, 40 people gathered to experience the wines of Etna along with paired dishes prepared by Executive Chef Francesco Di Caudo, who is also originally from the Etna region. Ferraro’s has been committed to elevating the awareness of Italian wines, and these dinners have been successful in attracting wine enthusiasts who want to learn more.

Benanti’s family had been growing grapes since the late 1700s, but in 1988, his father Giuseppe Benanti, who is well-studied in Etna’s native grape varieties began production of wines on one of his father’s old farms with the intent to elevate the quality of Etna wines.

“We only make wine from the grapes that are native to this area,” says Benanti, who left his pharmaceutical finance career to come back to his roots in the early 2000s .  Today he and his twin brother, Salvino, represent the second generation of pioneers of Etna. “There were only four wineries [in the region] when we started. Fifteen years ago, there were 20, and now we have nearly 150 wineries.”

“We don’t want to force that notion, however,” says Benanti.  “What we have is an earthiness, mineral, easy drinking. To be able to combine the soul of the wine with drinkability — it’s the best of both worlds.  This is Etna.”

Etna is, however, one of the places, aside from Barolo and Barbaresco in Piedmont, that is identifying clear-cut characteristics of each vineyard. Knowing the names of the contrade (crus) can connect the wine drinker with the quality and uniqueness of the wine.

“In Etna, people are already talking in terms of contrada Rampante vs. Guardiola vs. Feudo di Mezzo and so forth, and that sort of more precise description of the area will contribute to the wines gaining in value and becoming better known,” says Ian D’Agata.

The last two wines of the evening were single-vineyard wine expressions of Etna from two uniquely contrasting contrade, the first of which was Benanti Rovittello Etna Rosso, 2016, sourced from 80+-year-old vines within the commune of Castiglione di Sicilia on the cool north slope hamlet hovering at 2,300 feet (701 meters). Powerful and linear, it called for a dish that was more hearty such as Tortelli d’agnello (Lamb ravioli, Bronte pistachio, Caciocavallo cheese).  Brooding aromas and flavors akin to graphite, red currant, summer cherries, yellow flowers, tea, and herbs were just the accompaniment for the dense and meaty pasta.

The final taste of the evening was was another Etna Rosso, this time from the Contrada Monte Serra, Benanti Serra della Contessa 2013.  Serra della Contessa is the name of Benanti’s family estate. Vines from here are over 100 years old at an elevation of 1470 feet (450 meters) above sea level. It has been recorded that Serra della Contessa appeared for the first time in a notarial document written in Latin and dating back to the year 1474.  The wine – fresh and enticing, driven more by ripe fruit given its lower southeastern slope – paired effortlessly with Secreto Iberico de Bellota, artichoke, lentil, and marble potatoes.

More and more, producers are braving the volcano’s portentous rumblings and transplanting themselves in the region. Some of Etna’s premiere producers came from other places in Italy and the world, such as Andrea Franchetti from Rome and Frank Cornelissen from Belgium; and more recently, Gaja from Piedmont, who invested in Etna to acquire high elevations. But, Benanti and his family are as native as the grapes, being that they are originally from nearby Catania.

Benanti is spread out on Etna on specific sites – five vineyards in five different villages. It makes sense for them to “cover the mountain” and represent Etna is all its diversity, given the unique combination of elevation, different intensity of sunlight, different aspects, rainfall rate, ventilation, types of volcanic soil, and different age of vines.

“Etna is boutique and is right now in demand and trendy, but I don’t think that this is temporary. It’s a win-win-win, and it’s here to stay.” says Benanti.