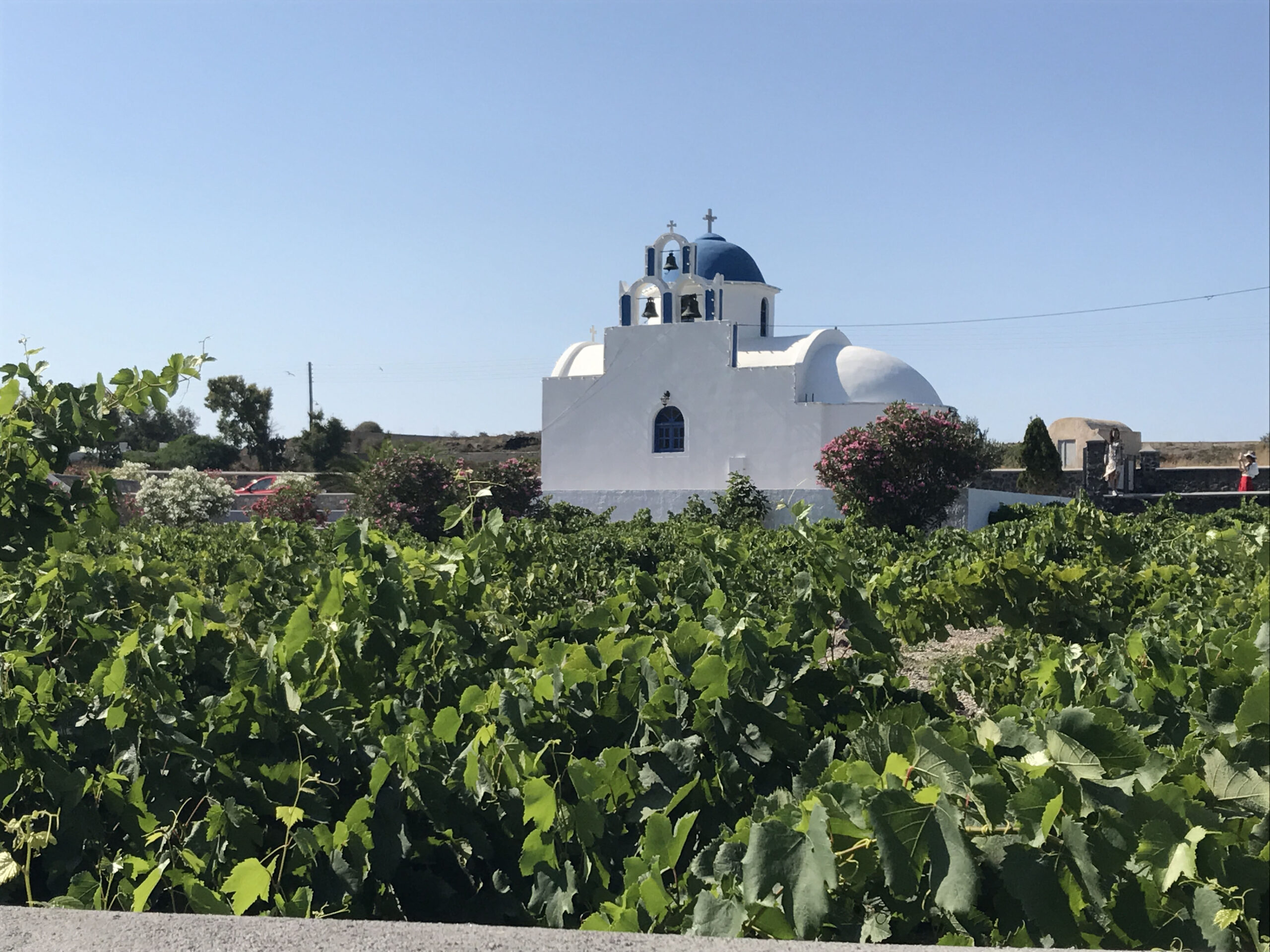 Santorini is already special. It’s the only inhabited cauldron in the world. Formed by volcanic eruptions, the crescent-shaped island, which sits half way between Athens and Crete, offers an astonishing array of contrasts.  Jagged rocky promontories and smooth downhill slopes meet the Aegean Sea. Arable land crawls with volcanic rocks. Deep ravines break up the scrubby plains. Native grape vines showcase their curious shapes, and the wine is unequivocally “Santorini.”

What makes Santorini’s wines so special? We can start by looking at the ground.

To scour the land by foot is to notice that volcanic rock is virtually everywhere. It’s amazing that anything can grow here, as there isn’t much visible organic matter. The island is volcanic, from the red lava sand beaches at Red Beach, to the black lava sand beaches in Perissa, the colors and textures are the product of nature’s wild side.  Santorini is essentially what remains from enormous eruption(s) that destroyed the earliest settlements on a formerly single, round island.

Throughout its history, millions – if not billions – of cubic meters of lava blasted into the sky and fell to the ground, covering what was left from the original island. What resulted was topsoil consisting of basalt, volcanic ashes, sand, pumice stone, and formations of lava that is so dramatic, it almost looks engineered. But from this island comes some of the world’s most delicious wines.

The face of the caldera is an assemblage of cliff faces that showcase different ages that have been exposed and re-exposed by this sequence of explosions. The eruptions left overlapping lava shields and volcanic cones that repeatedly collapsed, allowing the sea to fill the center of the island. Subsequent landslides, wave erosions and weathering have also helped to sculpt the masterpiece.

At the ground level, heavy, black, semi-shiny, angular, fist-sized rocks dot the land.  Considerably smaller porous black pebbles and light and airy white pumice stones crunch under the feet like puffed rice. Walking between the vines, the whiff of salty air, mixed with the scent of ash,  blows from the sea.

So how does Santorini produce great wines on land like this? If you’re willing, let’s be like grapevines and go deeper into the soil.

The soil provides two main things for wine: It directly affects how grapes absorb (or don’t absorb) nutrients, and it provides drainage for the roots of grapevines. Certainly, there are other things that contribute to a wine that exist inside and outside of the soil (climate, elevation, etc.) but when it comes to the difference between a vine that is thriving, versus one that’s just surviving, pH and drainage are major players. And, the vines that are just surviving are the most interesting and delicious!

Drainage means providing vines with water to live, but not so much that the roots end up soaked and prone to rot and disease. Essentially, the gravelly, loose, sandy soils of Santorini allow rainwater to quickly bathe the roots. The hard, crumbly volcanic soil contributes to excellent drainage.

Once grapes roots have had their water, they look for nutrients they need to thrive, such as nitrogen, iron, and phosphorus. But the existence of these and other minerals don’t necessarily contribute to the wines as much as the pH of the soil.

The pH is like the nutrient gatekeeper. It indicates how available those nutrients are to vines. Grapes can be grown within a wide range of soil pH, but soils closer to the neutral rating of seven are preferred. Growers in Santorini attribute their high pH in the 8 range from calcium-rich soils. These soils, coupled with adequate water, have a chemical makeup that encourages nutrient absorption by vines. It’s like the difference between eating a clean, nutritious meals, versus eating out of the vending machine each day.

Research suggests that soils in the higher range also allow the grapes to retain more acidity, lending to brighter, clean, crisp wines, like the wines of Santorini … and Chablis and Champagne. 😉

Still looking down toward the ground, Santorini has some of the oldest vines in Europe. Some are over 200-years-old. The older vines produce lower yields and remain more productive for a longer period but more importantly, offer concentrated grapes that show up in the glass as complexity.

They are old because the Phylloxera louse couldn’t stand a chance here. When the tiny pest swept through European vineyards during the 19th century, the vines in Santorini survived the disaster because of the lack of organic material.

Assyrtiko has remained the dominant cultivar on the island for hundreds of years, accounting for roughly 75 percent of the total terroir. It is considered the choice white grape for its ability to produce a variety of styles, from the fresh and crisp, to complex and aged, sweet and semi-sweet, to sparkling. Other varieties include Athiri and Aidani, and the red Mandilaria. And it’s no coincidence that they all go so lovely with the food. We can attribute this to Santorini’s special terroir.

A basket of grapes

The vines, too, are unique to the island.  Each vine is trained low to the ground in the shape of a coiled basket (or kouloura).  In the summer the “baskets” are covered in bright green leaves and within their embrace, the grapes ripen while being protected from the blasts of sand borne by the strong Etesian winds, which would knock the buds before bud-break otherwise.

This pumice stones that are found throughout the vineyards also provide a bit of magic. White and porous, these stones reflect the intense sunlight and work as a sponge to absorb a moisture from the air.

Santorini is an incredible place. A head-turner in the Aegean Sea. But beyond the charm of the blue-domed, white-washed structures, some of the most interesting qualities of the island is at ground level. Yet, after spending time discovering the land, it’s hard not to look up in amazement of this beautiful corner of the world.

The sunsets streaks the strata with colors ranging from spring lilac to plum and eggplant, and marigold to amber, as the golden sun sinks into the shimmering sea, only to rise for another glorious day tomorrow.

On Santorini there is no definition of time. It’s a magical destination worth visiting. And a glass of wine from anywhere in the world can take you there again.