TasteBUDs and award-winning duo Kirk Peterson and Marisa Finetti are an unlikely match, but they share a love of food and drink. In their new column, TasteBuds, they devour dishes and demystify drinks. This column originally appeared in VEGAS SEVEN magazine.

The honeymoon is decidedly over: American consumption of canned tuna is at an all-time low. What was once the most popular seafood—not to mention staple—of the American diet between 1950 to 2000 has all but disappeared from the collective consciousness as the former “Chicken of the Sea,” and has been replaced by … actual chicken. Today, we consume 58 percent more chicken per capita than we did in 1989, the same year our nation’s unparalleled love for canned tuna reached its peak when the average American ate almost 4 pounds of it a year (according to the USDA).

By the time Nirvana and Pearl Jam became a thing, the conversation started to shift to sustainability and bycatch concerns. And America’s increasingly “health-conscious” eaters and maligned mercury levels pretty much did canned fish in for good as a quality food. That’s because storable foods packaged in metal containers lost their appeal amid a national shift toward freshness. But we all know freshness doesn’t always equal flavor—think of cheese, wine and several thousand other things. Can the ever-increasing American culinary sophistication act as a lighthouse to guide us back to shore and rekindle our lost love?

Tuna consumption in the United States didn’t really decline as much as change forms (and species). While the first sushi restaurant in the U.S. opened in 1966 in the Little Tokyo neighborhood of Los Angeles, it wasn’t until 1970 that Osho, the first sushi bar to open outside of Little Tokyo, started to garner a broader appreciation from a wider audience. Fortuitously located next to the 20thCentury Fox studio, it quickly became a chic new favorite spot for Hollywood A-listers. Of course, tastes being slow to change, it took decades for the country to finally embrace this new cuisine that is now as American as apple pie and crunchy-shell tacos. But if the Japanese taught us to think that quality tuna is a dish best served raw, where do we look for guidance when it comes to the canned stuff? 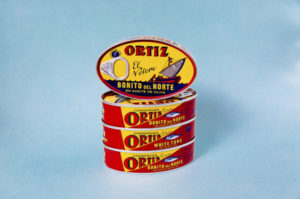 The general European opinion of canned fish could not be more different from America’s. Particularly in Spain, much of the premium quality fillets of fish are preserved in jars and cans by artisanal producers such as Ortiz, a fifth-generation family-owned enterprise dedicated to quality, sustainability and tradition. Bonito del Norte is a premium Spanish white tuna commonly hand-packed in olive oil that has been famous for centuries. These fish are individually line-caught to allow for the best quality tuna to be selected at the time of capture while also eliminating environmental hazards such as accidental capture of other species and damage to the sea floor caused by trawling nets. Ventresca tuna is a selection where only the rich, fatty tuna belly is used. Held in the highest esteem, it is literally the toro ofcanned tuna.

Because there are many other fish in the sea, variety is the spice of life, and more and more people are learning what umami means and how to appreciate it. So there’s no reason to confine oneself to just preserved tuna. After all, “tuna” is actually a subgroup within the mackerel family, comprised of multiple species, of which you will discover an abundance of scintillating sardines, smoky smelt and magnificent mackerel just waiting to be enjoyed for the first time. Or for the first time in a long time.

So here’s what you can do to get reacquainted with canned fish: Go online. Amazon, Dean & Deluca and La Tienda are all reasonable choices. Trust us, they were designed to travel well. If after reading this piece you can’t wait, even for Prime, jump in the car and visit Bob at Valley Cheese & Wine (1570 W. Horizon Ridge Pkwy, Ste. 140, Henderson, valleycheeseandwine.com) or the International Marketplace (5000 S. Decatur Blvd.). Then just open the can, throw the fish on toast and enjoy.